Recreational running will not increase chances of preterm pregnancy 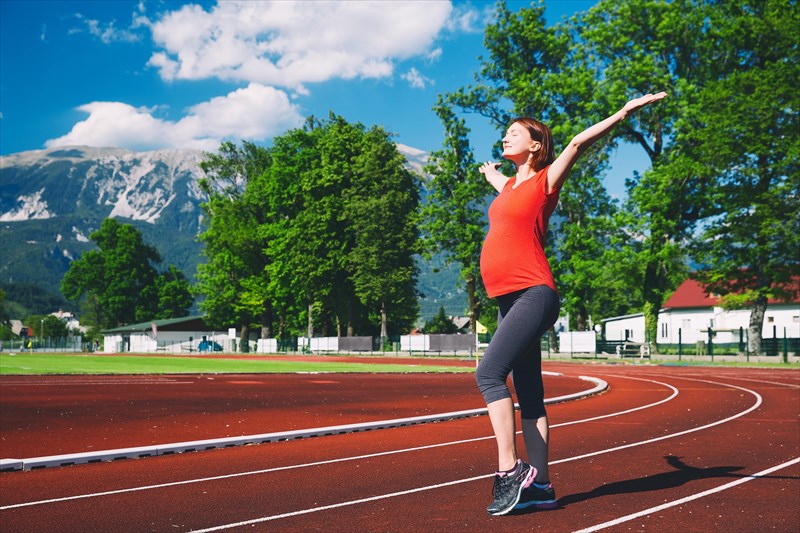 A new study answers the question of “Does running during pregnancy result in earlier delivery and a lower birthweight?”

While running was once a male-dominated sport, increasing numbers of women are now lacing up their running shoes before work in the early hours of the morning, during their spare time or after a long day at the office to blow off some steam, get fit, lose weight or just clear their heads.

For many, it is becoming more than a hobby, with the gender statistics of marathon running showing growing numbers of women entering marathons. In fact, 60 percent of the UK’s half marathon runners are female1.

A number of women who partake in either recreational or competitive running are in their childbearing years and as such, are likely to consult with their doctor or obstetrician regarding the safety of running and how it may impact the health of their baby during pregnancy.

The question of, “Just how safe is running while pregnant?” is one that has been a topic of debate for years now and has a number of women giving up running altogether upon finding out they are expecting a child as a precautionary measure.

Current evidence suggests that exercising at a moderate pace for a period of 30 minutes a day may reduce the significant weight gain, known as GWG (gestational weight gain), often experienced during pregnancy. Limiting GWG may help to minimise a woman’s risk of hypertension, gestational diabetes and pre-eclampsia as well as weight retention after pregnancy1. The management of GWG has also been linked to a reduced risk of chronic disease for the child in the long-term and may also benefit his or her growth.

In contrast to these benefits, there are also more theoretical concerns regarding women who excessively exercise while pregnant giving birth to babies of a lower birthweight, which may increase the child’s risk of cardiovascular morbidity and obesity in the long-term. Other effects that strenuous exercise during pregnancy may have are listed below1:

With the risks of excessive exercise during pregnancy in mind, most doctors usually deem exercise safe and will encourage continued moderately intensive exercise in those who exercised at comparable intensity before falling pregnant and have uncomplicated pregnancies.

However, there is a lack of running-specific evidence that focuses on the impact that this vigorous form of exercise has on a developing foetus. There are considerable forces that are generated when a runner’s foot hits the ground, these forces are then transmitted through the legs to the pelvis and have the potential to affect the cervix’s structural integrity.

Given the growing popularity of running among women, whether to keep fit or for more competitive reasons, many want to continue this pursuit during pregnancy and consult their doctors about the safety thereof. It thus becomes clear why this is a relevant topic for research.

To get answers, a recent study, which we’ll discuss in detail shortly, which was the largest of its kind to date focussed on women who participate in Parkrun events. These women were regular runners who became pregnant. The study aimed to investigate the impact that running has on birthweight, the rate of assisted vaginal delivery and the rate of premature births.

** My Med Memo - When a baby is born before the 37th week of pregnancy, this is considered a premature birth. 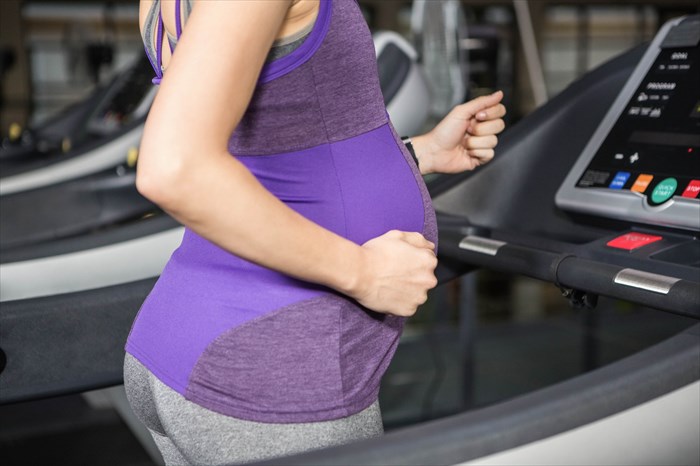 What did this study entail?

The cohort study was conducted by a research team from King’s College in London who recruited a total of 1,293 women that belonged to the Parkrun group. Parkrun is a worldwide running club that has over 1.25 million members. The group organises weekly timed and free 5 kilometre runs in over 450 parks globally.

**My Med Memo – A cohort study is a form of medical research that is used as a means of investigation to determine the health outcomes of certain risk factors evaluated in the study. The ‘cohorts’ are the group of people or ‘test subjects’ observed in the study.

The women recruited for this study took part in Parkruns between the 4th of November 2014 and the 9th of January 2015 and had been pregnant in the past. An internet-based (i.e. online) questionnaire was sent to these women to collect information about their running habits during their first pregnancy and how this affected their birth outcomes. Women who did not provide a birthweight, data on their gestational age or those who experienced a preterm delivery that was iatrogenic (i.e. medically induced due to complications) were excluded from the study.

The team of researchers first grouped the women according to whether they had continued running upon discovering that they were pregnant or if they had stopped running completely, this was seen as the primary analysis. The participants were then further divided according to the exact pregnancy trimester during which they had stopped running. The groups were as follows – first, second and third trimesters and those who stopped running during pregnancy – this group acted as the control group. The groups were then further categorised according to the average weekly kilometre distances run while pregnant, which were as follows:

The above categorisation and evaluation was the focus of the research team’s second analysis.

Following this, the team of researchers analysed the below birth outcomes in order for any associations to be detected between these factors and running:

A total of 15,500 runners from Parkrun responded to the online questionnaire, and 1,293 complete responses were analysed for this study. The basic results from the subgroups mentioned above were as follows:

The research team found no drastic difference in the average duration of pregnancy (i.e. gestational age) at the time of delivery between the participants who had continued to run and those who had stopped running. The results showed that women who continued to run were pregnant for 279.6 days compared to the 279.0 days of those who did not run at all, making the mean difference 0.6 days with a confidence interval (CI) of 1.3 days to 2.4 days.

There was also a lack of significant difference between the groups and the birthweight centile of their babies which was 46.9% versus 44.9%, with a mean difference of 2.0% in women who had stopped running entirely compared to those who had continued running, respectively. The average weekly running distance and the trimester at which the women had stopped running also did not seem to have an impact on the outcome of delivery or birthweight, even in those who covered the greatest weekly distance and continued running into their third trimester.

When analysing the rates of assisted vaginal deliveries, these increased in the women who ran during pregnancy compared to those who had stopped. The results for assisted vaginal deliveries were as follows - 27% (195/714) in those who continued to run versus 22% (128/579) in those who didn’t. However, there was no drastic difference when examining the average weekly distance of running or the trimester during which the running was stopped.

What the research team also found is that women who did not run when pregnant were roughly 2.3 kilograms heavier than women who continued running. The majority of women who never ran during pregnancy were either obese with a BMI of more than 30 or were overweight with a BMI between 24 and 29.9.

Although this is a rather interesting observation, findings such as these are not sufficient enough to establish a causal link between running in pregnancy and having a lower maternal weight or reduced weight gain. This is because women who had continued to run despite being pregnant were probably more likely to have had a greater commitment to the sport and a lower BMI (body mass index) to begin with. Secondly, the women involved in the study recorded their current BMI, as opposed to their BMI while pregnant. However, for the purposes of this research, the current BMI of women who ran during pregnancy is likely to represent an accurate figure for those who are health conscious and motivated Parkrunners.

Discussion of the study

As seen in the results mentioned above, there was a lack of significant difference in the birthweight and gestational age in the babies of women who had stopped running and those who had continued during their pregnancy, this was regardless of the trimester during which they had stopped running and the running distance covered. This suggests that recreational running in this regard has very little influence on the placental function and the mechanisms of a woman’s labour onset. Impact effects and pressure on the head of the foetus or the integrity of the cervix while running does not appear to influence gestation or one’s labour onset.

The study showed that if a woman continues to run during pregnancy, her risk of having an assisted vaginal delivery may increase in comparison to women who stopped running. The overall rates of these assisted deliveries were rather high, at 25%, bear in mind however, that these reports were based on the women’s first pregnancy, wherein rates of assisted vaginal delivery are generally higher in women who are primiparous (i.e. bearing a child for the first time). These assisted deliveries may be higher due to the fact that pelvic floor muscles in runners are more developed and as a result, create resistance of the soft tissues to the crowning of the baby’s head which results in the increased need for assisted delivery.

The conclusion of the study and further work needed

As more and more women of reproductive age are starting to take up running as a means of recreational exercise, any information with regard to the effects that this sport can have on potential pregnancies are generally welcomed. Based on the findings of the study and previous research conducted, women who would like to continue with recreational running while pregnant can breathe a sigh of relief in knowing that this is not likely to affect their baby’s birthweight or increase their chances of having a preterm delivery.

In order for the impact of recreational running on gestational age and birthweight delivery, as well as the rate of vaginal deliveries to be further explored and assessed, the research team would need to carry out a prospective analysis. This would involve randomly allocating female study participants to either stop running when pregnant or adhere to specific running regimes. Time will tell if funding for this is obtained.

In the meantime, though, general medical advice dictates that moderate exercise is recommended during pregnancy, however, more high-impact, strenuous and vigorous sports may put a woman and her developing foetus at risk of injury. As a result, it is advised that you always check with your doctor before engaging in any physical activity while pregnant as there may be some pregnancy complications specific to you that you will have to take into consideration when exercising.

1. BMJ. 2018. Is recreational running associated with earlier delivery and lower birth weight in women who continue to run during pregnancy? An international retrospective cohort study of running habits of 1293 female runners during pregnancy. Available: http://bmjopensem.bmj.com/content/4/1/e000296 [Accessed 18.04.2018]