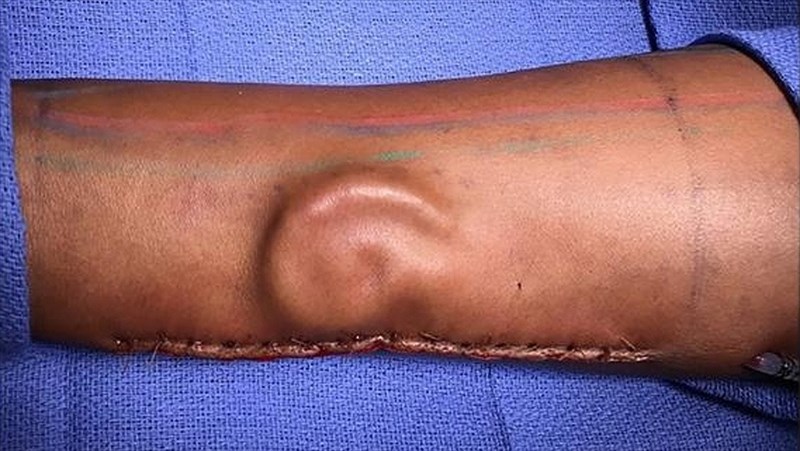 A team of army surgeons have successfully transplanted an ear they grew on a U.S. soldier’s forearm after she lost her left ear in near-fatal car accident

Thanks to the innovative efforts of a team of surgeons at the William Beaumont Army Medical Centre in Texas, a U.S. soldier, Shamika Burrage, who lost her left ear in 2016 had a new one transplanted successfully after it was ‘grown’ on her forearm.

This revolutionary surgery which involved the total reconstruction of the ear has been performed elsewhere in the world in the past but was a first for the U.S. Army and has been in the making for over a year. The procedure is referred to as neovascularisation and Burrage’s surgery was led by the chief of Plastic and Reconstructive surgery at the army base, Lt. Col. Owen Johnson III.

The process involved harvesting cartilage tissue from Burrage’s rib cage from which a new ear was carved.

The carved tissue was then inserted under the skin of her forearm to allow the ear to grow. The body, automatically recognising its own tissues develops new blood vessels and even a nerve within this tissue, all of which are essential in the development of a viable new ear.

Dr Johnson stated that once all surgical procedures and rehabilitation are complete, Burrage’s new ear will contain fresh new arteries, veins and even nerves that will allow for sensation. He went on to mention that the goal of the surgery is for Burrage to have a new ear that not only looks good but also has sensation. He believes that in five or so years, once the healing process is complete, should someone who doesn’t know her look at her ear, they won’t notice the difference between it and her right ear.

Burrage, only 19 at the time, was involved in a near-fatal car accident two years prior to the surgery. She lost control of her vehicle after a tire blew and caused her to veer off the road, sliding roughly 700 feet (210 meters) before flipping several times, ejecting her in the process. The young soldier was on her way back to her base, Fort Bliss, after spending some time with her family. Her cousin, who was in the passenger seat, only sustained minor injuries. Burrage was not as fortunate and suffered from road rash, spinal and head injuries and also lost her ear in the accident. Emergency services came to the rescue, and doctors later told Burrage that if she had been left on the road for just a half an hour longer without receiving the medical attention she desperately needed, she would have bled out.

Following this traumatic accident, Burrage had reluctantly accepted that she would have to wear a prosthetic left ear for the remainder of her life. She was, however, unhappy with the way it looked and so she began to research what her plastic surgery options were.

When meeting with Dr Johnson and his team, they proposed the idea of growing an ear on her forearm from cartilage of her rib cage, which would later be transplanted onto the side of her head where her ear once was.

At first, these ideas were met with shock and disbelief and Burrage was reluctant to consider the seemingly strange proposal. Dr Johnson encouraged her to have the reconstruction because she was so young, and he didn’t feel that she should have to spend the rest of her life without an ear. He later echoed this sentiment, stating that he believed that all young soldiers who are involved in various acts of duty, deserve only the best form of reconstructive surgery possible.

After giving the proposal some thought, Burrage informed the medical team that she believed the procedure would be beneficial and that she was interested in seeing the possibilities and end result of this type of surgery. 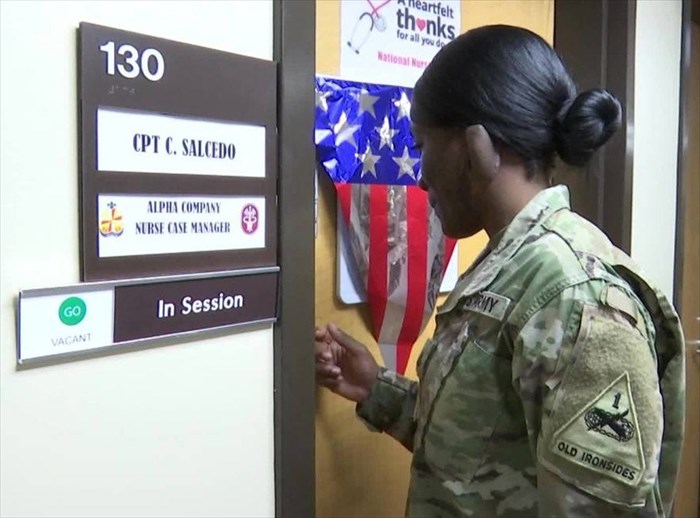 In order for the surgery to avoid any unnecessary additional scarring which Burrage had originally been concerned about, the procedure involved constructing a prelaminated free flap on the forearm and placing the autologous (tissue obtained from the same individual being operated on) cartilage into it in order to allow for neovascularisation (i.e. the natural formation and development of new blood vessels) in it. This particular technique affords the patient the ability to experience sensation in the ear once the process of rehabilitation is complete.

**My Med Memo – Flap prelamination and prefabrication1 are new and evolving techniques that are beneficial during the reconstruction of complex and intricate defects of the neck and head. Flap prelamination, as used in this specific instance, involves adding additional tissue to an existing area, this is done without manipulating the axial supply of blood to the tissue, in order for a multi-layered flap to be made and potentially used for reconstructive surgery purposes.

In addition to the ear transplant, the team of surgeons attached epidermal tissue (i.e. the surface layer of skin) from Burrage’s forearm to the ear, which covered up any scar tissue in the immediate area surrounding the soldier’s jawline on her left-hand side.

Burrage reported that during her recently conducted initial surgery, the surgeons were also able to reopen her ear canal which had closed as a result of the severity of damage sustained during the accident.

In a closing statement, Johnson commented that the entire field of plastic surgery is deeply rooted in trauma sustained on the battlefield and that all of the major advances in reconstructive surgery have been as a result of war.

Burrage still has two surgeries ahead of her but is reportedly feeling optimistic, as well as excited for the final reconstruction to be complete.

Advances in medicine such as this are an exciting prospect for those in need. They not only push the boundaries or what is currently being done, but also pave the way for the future development of other revolutionary procedures, extending the realms of possibility in reconstructive surgery more than ever before.

1. Research Gate. 2001. Prefabricated and prelaminated flaps for head and neck. Available from: https://www.researchgate.net/publication/11938494_Prefabricated_and_prelaminated_flaps_for_head_and_neck_reconstruction [accessed May 11 2018].