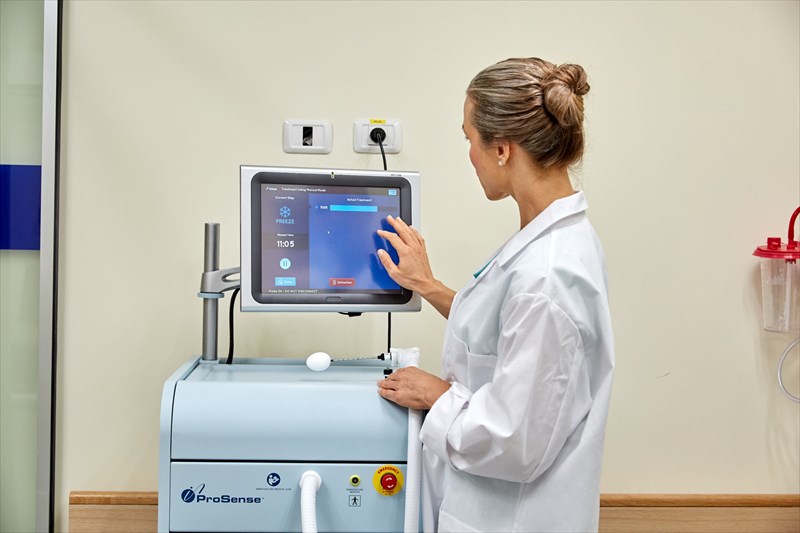 As a medical treatment technique, cryoablation of tumours has been proven useful numerous times during the last several years in particular. Clinical trials have shown promising results in treating both benign and malignant tumours in various areas of the body. Now steps are being taken to bring the technology into mainstream treatment practice, and a hospital in Israel has just committed their support.

Elisha Hospital (Haifa, Israel) is getting ready to incorporate IceCure Medical’s ProSense cryoablation technology system as part of their private practice treatment offering for patients with benign (non-cancerous) breast tumours and malignant (cancerous) tumours of the kidneys. The hospital made a public announcement of their collaborative intentions on 15 August 2018.

Dr Shlomo Israelit, Director General of Elisha Hospital, shared in the news statement that the hospital is proud to be the first to lead such medical progress with regards to offering an alternative treatment to surgical extractions.

A growing number of professionals in the field of medical science are taking the initiative to create both effective and safe treatment alternatives to surgery of late. And for IceCure Medical and many others in the field who support the development of minimally invasive procedures for treating benign and malignant growths, this announcement is exciting news indeed.

Teams such as that from IceCure Medical are making significant strides in demonstrating promising treatment option possibilities. So much so, that such possibilities are now seemingly on the verge of becoming a reality in as little as a month’s time. Medical practitioners and hospital boards can’t help but take note of this. Surgical treatment of certain tumours is no longer the only option.

IceCure Medical, founded in 2006, is heavily focused on cryoablation therapies and the development of minimally invasive systems which offer safe and effective treatment options. The biotech company both develops and markets their systems, which are geared to considerably improve the overall state of health of patients.

To date, cryoablation has largely been experimental and used in a handful of hospitals for the treatment of small fibroadenomas (non-cancerous breast tumours), for which the technology was granted approval by the FDA (US Food and Drug Administration). Approval was given in 2002, followed by certification by the EEA (European Economic Area). Clinical analysis of the potential to use this technology to treat other types of tumours, either benign or malignant, is well underway. It is the hope of researchers that cryoablation could very well become a viable first-line treatment option for many individuals who would previously have had little choice but to opt for surgical extraction.

In the coming weeks and months, Elisha Hospital will set up IceCure’s ProSense cryoablation system, offering patients who are viable candidates this option of treatment. Breast fibroadenomas up to 5 cm in diameter will be eligible for treatment using this system at Elisha Hospital’s Rambam Medical Center. On board with the technology is the hospital’s head of breast surgery, Dr Rafi Klein, who will be taking on the responsibility of offering the treatment to patients with benign breast tumours. In future, both Dr Klein and the hospital hope to be able to offer this treatment alternative to patients with malignant breast tumours as well.

The ProSense system will also be available for treating malignant kidney tumours at the hospital. The hospital’s urological department head, Professor Ofer Nativ, and interventional radiology first in command, Dr Robert Sachner, have been named the professionals responsible for offering this treatment option to eligible patients.

“Treatment in Israel joins the successful commercial treatment that has already been performed with our technology in Japan, the US, Hong Kong and Europe for various indications including breast, lung, bone, kidney and liver cancers,” he says. 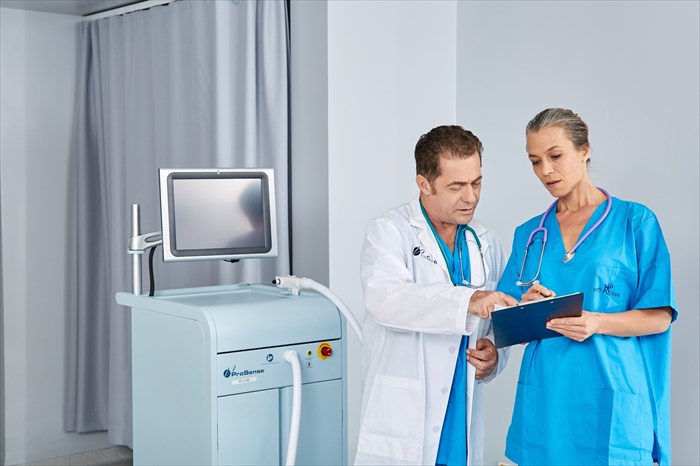 Cryoablation, on the path to success

For the majority of patients with a diagnosed growth or tumour, treatment options primarily involve surgical extraction. For those with malignancies, chemotherapy or radiation is the second dose of gold standard treatment practice. For several decades the idea of targeting a tumour without a patient needing to ‘go under the knife’ has undergone much testing in clinical trials. If tumours can be treated in a non-invasive and non-debilitating way, then why not? It not only benefits patients, but also health sectors which currently incur high costs due to surgical practices.

Earlier this year, use of cryoablation techniques demonstrated undeniably successful results in destroying malignant breast tumours up to 1.5cm in diameter with an extraordinary low rate of recurrence and few minor side-effects. Patients participating in the ICE3 clinical trial (1) are showing such highly promising results (99%), even during efficacy follow-up, that tumours in other locations of the body are also undergoing further clinical research using this technique. These include the liver, lungs, prostate and bone structures. The ICE3 clinical trial is set for completion around 2024, with further analysis and patient follow-ups still underway.

Essentially, cryoablation makes use of thermally conductive fluids, such as liquid nitrogen, which are delivered to tumour tissues in a targeted way. Liquid nitrogen is delivered with the use of a hollow probe (needle) with the intention of destroying the tissues using extreme cold (sub-zero temperatures).

The probes used are available in several sizes which allow a physician to select the one determined as most useful for the targeted ablation zone. The probe is cooled and inserted and an ice-ball (made up of ice crystal) is created, forming around the targeted tumour tissue.

The vacuum insulation of each probe provides protection to surrounding skin and other bodily tissues. Only the targeted ablation zone (i.e. tumour) is affected during the procedure. The administering physician makes use of a console, along with the attached probe, which comes with a touch screen system. This allows the physician to coordinate a customised procedure for a patient, while making use of a handle, foot pedal and provided buttons on the handheld probe device. The physician also makes use of either ultrasound or CT (computerised tomography) scan imaging technology during the procedure. Such imaging techniques help to provide accurate guidance capability during the procedure, allowing the physician to clearly guide the probe into the centre of a tumour using these imaging tools. He or she is also able to clearly see the ablation process during the procedure, ensuring its successful administration.

The cold liquid nitrogen administered into the targeted tissue, forming an ice-ball around the tumour, begins the process of killing off the unwanted cells within its original location in the body. Within a few months following treatment, a patient’s tumour will gradually reduce in size as the destroyed tissue cells are absorbed into the body, until it is no longer existent. Follow-ups with the physician will be required to determine the overall outcome of the procedure and confirm the successful destruction of the tumour. 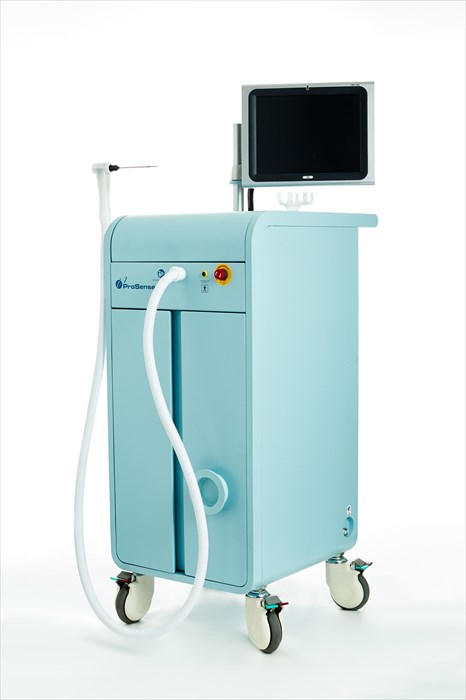 No general anaesthetic and no incisions are required during the process. Instead, cold temperatures are used to perform the procedure, along with an injected local anaesthetic enables a numbing effect for the patient, as well as light sedation. Associated risks are thus dramatically minimised. For the patient, a cryoablation procedure is near painless, taking under an hour to perform and the sensation of coolness due to the administration of liquid nitrogen to the affected area is all a patient may be likely to feel during treatment. There is virtually no downtime and a patient is able to resume normal daily activity with little after-effect interference.

Cosmetic benefits include little scarring – a small scar may be expected on the skin where the thin probe (no larger than about 3mm) is inserted – and for breast treatment patients, no deformity affecting the shape or size of the breasts occurs.

Another benefit is that although the procedure will take place within a medical environment and is performed by a qualified medical practitioner, hospital admissions are not necessary. A medical office environment can suffice. This significantly reduces incurred costs too.

For both patient and physician, the procedure is not tremendously time-consuming. Some patients have been treated in as little as 20 minutes.

"Elisha Hospital welcomes IceCure's leadership of a revolution in the field and wishes us success on our common path towards good, proper and progressive medicine for all patients," says Dr Israelit.