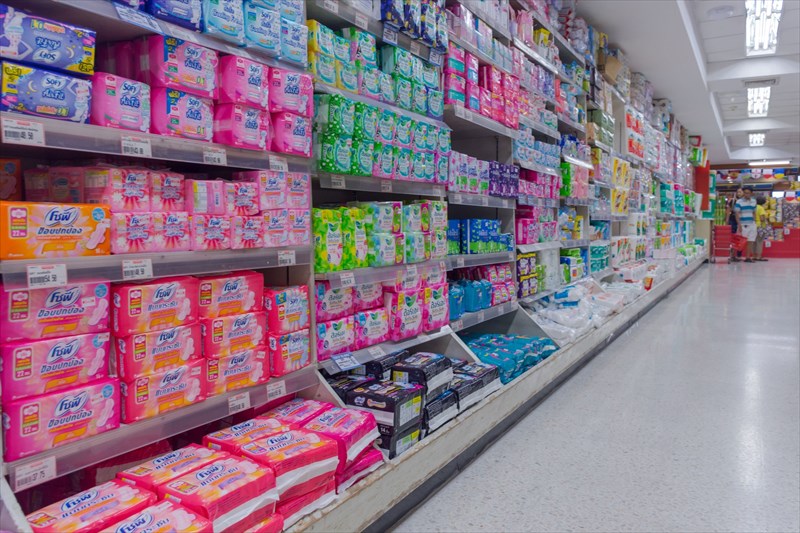 Since the beginning of time women have had to deal with menstruation. During the dark ages, women are said to have rarely experienced menstrual periods, since they were generally pregnant for most of their lives and died at a drastically young age. Shocking right?

Throughout history and even in some modern cultures, having a period has been considered somewhat of a shadow of shame that is cast over all women each month, forcing them to deal with it themselves and not openly discuss the ‘taboo topic’.

In the past options were very limited when it came to menstrual products and women had to make do with what was available, and often, that wasn’t much!

In this article we’ll take a look at the menstrual cycle and how menstrual products have evolved over the centuries. By the end of it we can almost guarantee that you’ll be very thankful that you’re a woman of this era. 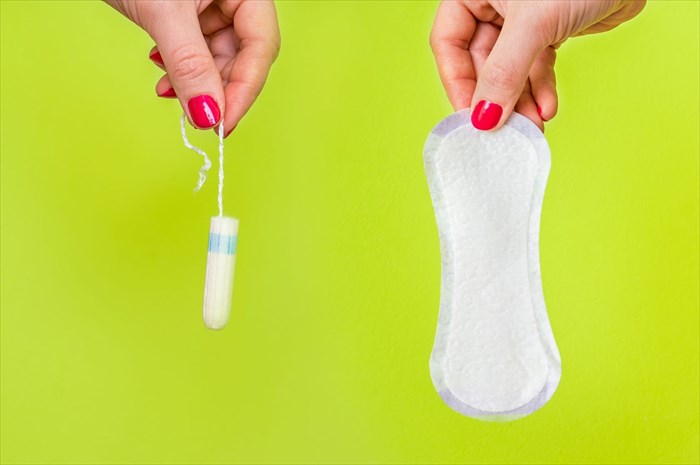 What is a menstrual cycle?

To simply a highly complex process (the intricate biology of which is truly astounding), each month, an ovary releases an ovum (egg) for fertilisation, this is known as ovulation. If the egg is not fertilised, the lining of the uterus, containing blood and tissue sheds, passing through the cervix and the vagina. Thus, the menstrual period begins.

On average a menstrual period usually lasts between three to five days but can sometimes be as long as seven days. 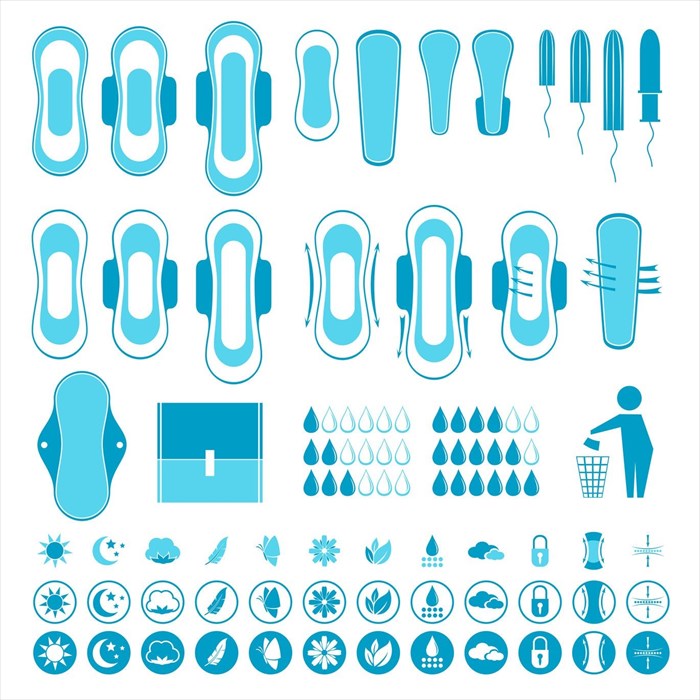 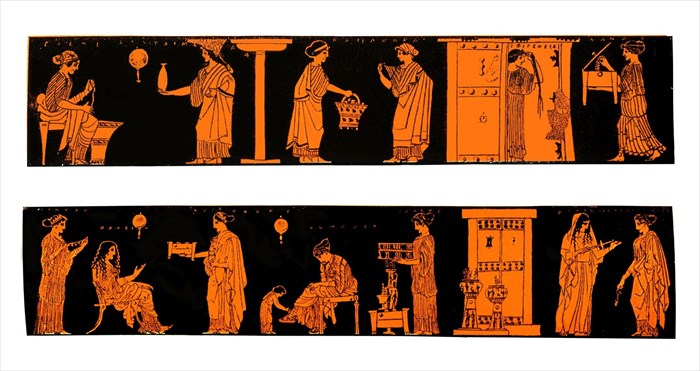 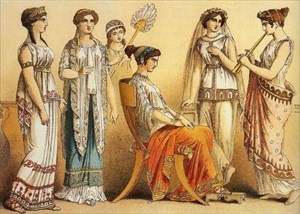 Homemade rags were the items of choice for ancient Greek women when it came to managing blood flow at that time of the month.

Interestingly, there are some claims that propose that Grecian women used lightweight wood to create primitive tampon shapes.

They would wrap pieces of lint around these wooden "plugs" to create an absorbent object (known in ancient Greek as a ‘motos') small enough to insert inside themselves. However, it is argued by historians and so called “Greek menstruation experts” that this method may have been used as a form of contraceptive rather than to manage menstrual flow. 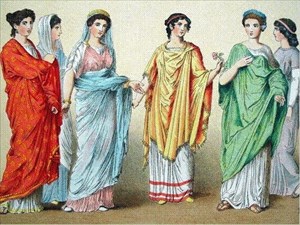 While wool is not as absorbent as cotton, it managed to do the job.

However, woollen pads often held the strong odour of blood and were thicker and heavier than cotton pads.

Both materials were thought to have been pinned to their garments during menstruation. 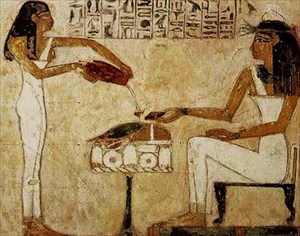 We all know that the ancient Egyptians are thought to be one of the first people to use papyrus, which is a material that is created from the stem of a water plant used to create sheets for paper, baskets mats, sandals and even rope.

It is believed that Egyptian woman created a tampon-shaped device out of softened papyrus and used it to absorb menstrual blood. 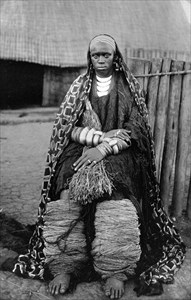 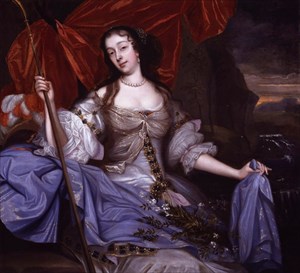 Menstruating was a taboo topic among men and women, and women were encouraged to keep it to themselves.

Homemade pads were made from natural ingredients such as:

The age of hygiene 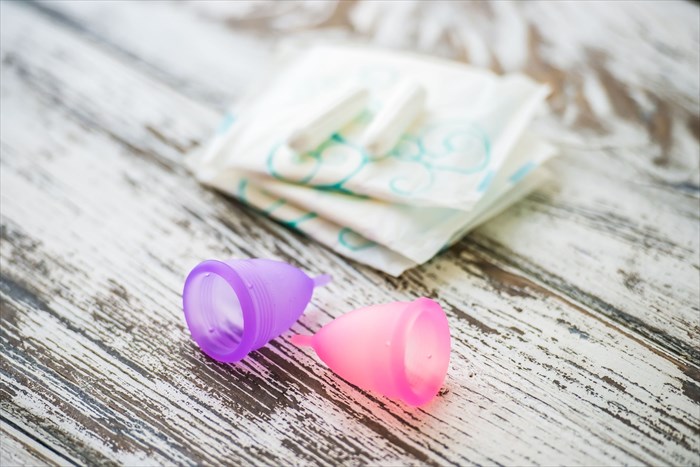 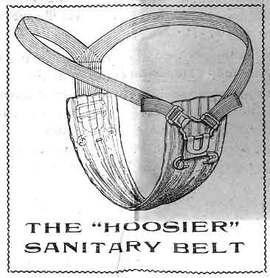 In the late 19th century (1879) the idea of women bleeding into their clothes and then wearing the same clothes for four to eight days was considered disgusting and unhealthy.

It was around this time that doctors concern for infection from unsanitary conditions grew.

Thus, the Hoosier Sanitary Belt, a belt that pinned to washable cloth pads, was born. These were the popular choice for most women from the late 1800's to the 1920's. 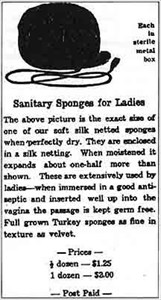 While it is believed that sea sponges were used for centuries by ancient women, they were discretely marketed to women in the late 19th century as an alternative to the foul smelling washable napkins that were used at the time.

Sea sponges were placed in a net with a string to allow easier insertion and removal from the vagina.

They did not require the same amount of vigorous cleaning as the napkins did and were easily cleaned and rendered reusable after being boiled in hot water for five to ten minutes. 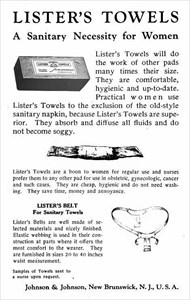 The first absorbent disposable sanitary pads were a result of nurses seeking  a new method to stop bleeding on the battle ground during WWI. The first sanitary pads were made from wood pulp bandages (known as Cellucotton) that French nurses found in hospitals. The bandages were extremely absorbent and affordable  enough to throw away instead of washing and reusing them again.

In 1896 Johnson & Johnson jumped on this and created their own version called Lister's Towel: Sanitary Towel's for Ladies, these were used in combination with Lister’s belts, to which the sanitary towels were attached.

However, advertising was thought inappropriate and women were uncomfortable asking for the product in stores and the product failed. Sanitary pads were still available in-store for women to purchase but, they were frightfully expensive, and most women opted for the washable and traditional homemade versions. 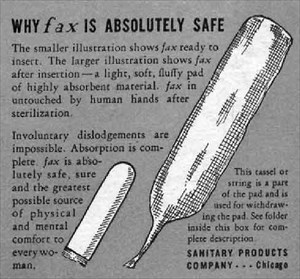 While homemade tampon devices were around, in the late 1920's Fax tampons were one of the first commercially marketed tampons.

Made from absorbent material that was wrapped in gauze, these tampons had no applicator and no string.

Fax tampons were disposable and more sanitary but complaints of leakage were the number one issue among women. Kotex recognised this concern and used it to advertise their new "leakage free" product.

By this time, advertising menstrual products was more accepted by main city communities. Women became more comfortable with the idea of asking for and purchasing sanitary napkins after they were advertised in popular catalogues.

a disposable sanitary napkin for women from the same absorbent bandages originally used by French nurses and commercialised it. They were made from 40 rectangular shaped piles of absorbent creped cellucotton and wrapped in gauze by hand.

These disposable pads were pinned to a slim fashionable belt that was worn under clothing and ensured that they stayed in place and were easy to change.

Eventually, sanitary napkins (disposable pads) were accepted as a normal way of life for menstruating women.

Alternatively, those who could not afford the new and exciting disposable napkins opted for the sanitary apron. These were made of a thick material, usually dark red or black in colour, and worn under a skirt or dress to act as a protective barrier from staining clothes. They were not that sanitary and did not work very well.

The Creation of Applicators 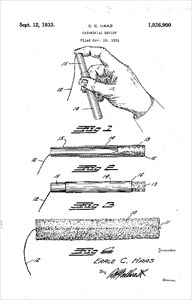 In 1929 Dr Earle C. Haas invented and patented the modern tampon with an applicator. Haas developed the idea after a he discovered that a friend of his had been inserting a small piece of sponge inside herself during menstruation as opposed to wearing bulky sanitary napkins. He wanted to create a better option for women.

This was quite innovative for that time as women were generally uncomfortable with manually inserting a tampon due to it being taboo to be so intimate with their vaginas and menstrual blood.

In 1931 Hass had finalised the design and creation and patented the tampon "Tampax" (Tampon + Vaginal Pack = Tampax).  Thus, the first tampon with an applicator hit the market. 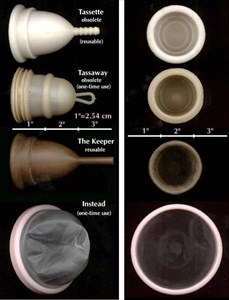 The first "modern" menstrual cups, which were like the ones used today were invented in 1937. The first patented cup was made from latex rubber with the aim of allowing women to wear slim, tight-fitting clothes and draw comfort from knowing that there were no belts or pads showing. However, during the second world war (WW II) the shortage of latex rubber forced the production companies to shut down.

The menstrual cup made a comeback in the late 60's, but never really attracted public attention and faded into obscurity.

Disposable Tampons without an applicator 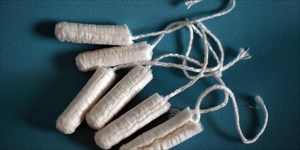 In 1950 O.B released their line of disposable tampons without an applicator across Europe. These became the more popular choice for women in Europe as they were smaller in size and slipped more discretely into purses. They were only released in the US around the 70’s. 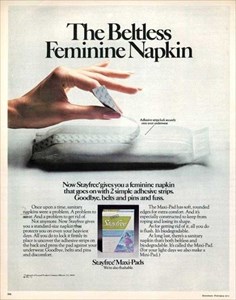 In the early 1970's a breakthrough in disposable pads was made. An adhesive strip was placed at the bottom of pads and could easily be stuck to women's underwear and removed when ready to be discarded. Scented pads were also introduced to the market around this time. Women quickly favoured the new belt-free option and by the 1980's belted sanitary napkins were hardly used anymore. 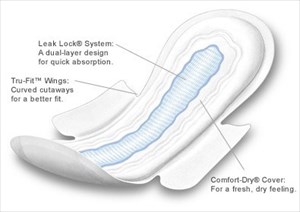 During the 90's the release of innovative absorbent gels which were built into sanitary pads were a breakthrough in both comfort and hygiene. This was also marketed as an alternative to tampon use, aimed at reducing the number of Toxic Shock Syndrome (TSS) cases in women which hit an all-time high during the 80's as a result of super absorbent tampon use.

A modern take on menstrual products 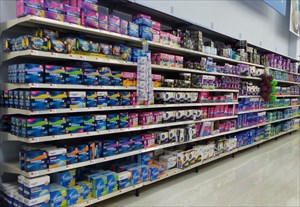 Today women have a variety of options available. Disposable pads have become drastically thinner and more discrete. Tampons have become available in a variety of sizes and are generally safer to use and more user-friendly. Menstrual cups have made a comeback and have an increasing following with the newer silicone-based design that is said to be more comfortable and user-friendly.

Whatever your preference is, we now have options and for the most part, in the developed world, are no longer encouraged to keep our menstrual cycle a taboo topic.

Preventing an unwanted pregnancy is simple to do and comes down to your preferred method. We breakdown the different types, and pros and cons of each...

A common endocrine system disorder causing enlarged ovaries, polycystic ovarian syndrome (PCOS) can be disruptive to a woman's body, but isn't the end of her reproductive potential...

Endometriosis can be a painful condition that many women suffer from. However, it does not have to be a debilitating one...

A sudden high fever and a sharp drop in blood pressure are some of the main warning signs for toxic shock syndrome. Learn more here...

24 things every woman should know about her vagina