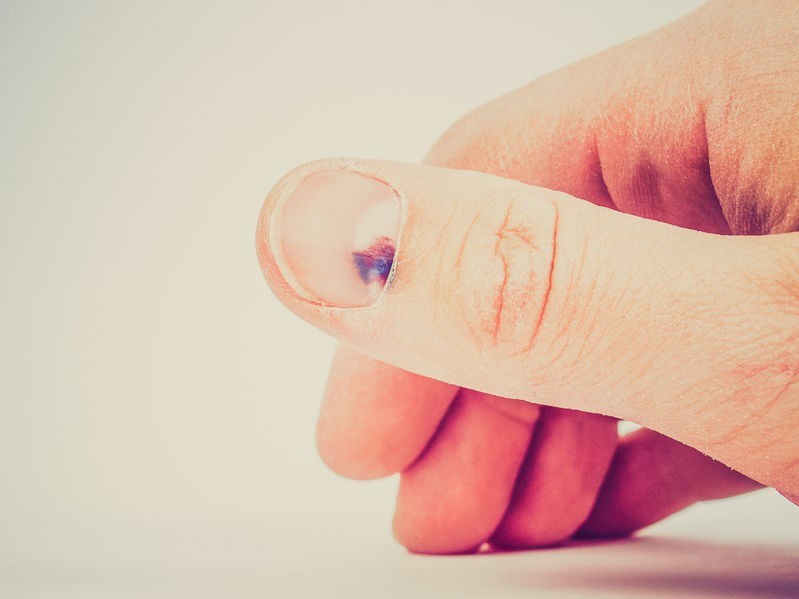 Conditions or functional changes which disrupt the nail growth process or alter the structure of the nail/s is often referred to as nail dystrophy. Some nail diseases which can be diagnosed include:

A linear red band or streak, which extends from the nail fold, over the lunula and to the free edge. The discoloured portion is less compressed than the adjacent parts of the nail plate – thus blood may pool in the thinner groove that develops. Benign or malignant nail tumours can also develop. These bands or streaks can affect one or more nails. As a condition, it is linked with Darier disease (a skin disease that manifests as dark, crusty patches that sometimes contain pus) or lichen planus. A biopsy may be necessary for diagnosis.

Brown or black discolouration can also occur as a result of melanin being present in the nail plate (melanocytic activation or stimulation). This discolouration, unlike melanoma, is benign, presenting as a single band on a nail. Multiple discolouration bands can also occur on several nails. A differential diagnosis will be made at a medical consultation. 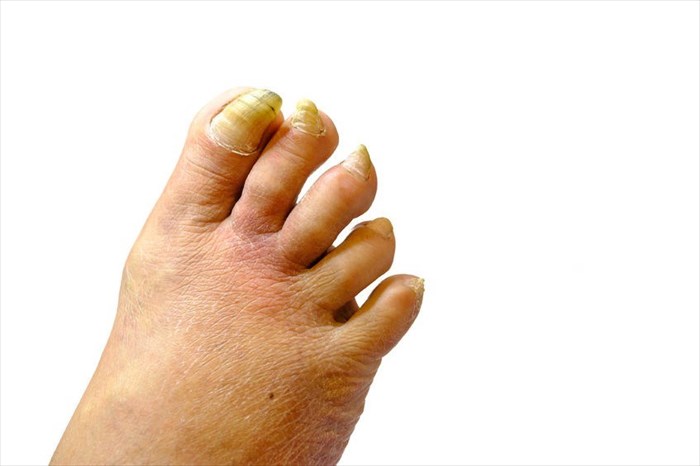 Nails (most typically the large toenail) grows abnormally, resembling a claw or ‘ram’s horn’. One side of the nail typically grows quicker than the other causing excessive curving / distorted growth (hypertrophy). Other nail changes include thickening and yellow discolouration.

Nails which embed backwards into the nail fold cause inflammation and discomfort. This condition is not the same as ingrown nails which occurs as a result of lateral growth embedding. Common reasons why Retronychia occurs include repetitive injury or trauma to the nail, resulting in incomplete nail separation. The new nail begins growing from the matrix and forces the old nail plate upward. This causes discomfort and inflammation. Longitudinal growth of the affected nail/s is also interrupted.

Longitudinal lines (long or short) that are red / pink in colour can also occur as a result of blood leakages from small blood vessels (capillaries) within the nail bed. These lines or streaks are generally thin. Common causes include injury or trauma to the nail. Rarely a systemic condition (including renal failure or a connective tissue disease) causes this nail abnormality. The marking may grow out naturally. 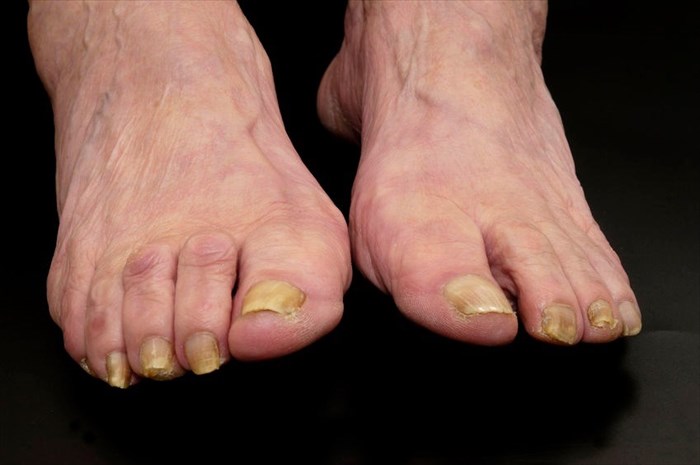 Abnormal keratinisation causes a build-up of soft, yellow keratin skin cells (scales) between the nail plate and the nail bed. Common underlying causes of this abnormality include trauma or injury, eczema, psoriasis and onychomycosis.

The affected nail/s are rough and sandpaper-like due to a problem with keratinisation. Other changes can include vertical ridging, pitting, and cuticle thickening. Nails can also become brittle. One, multiple or all 20 of a person’s nails may be affected. (7) This nail condition may be associated with underlying conditions including psoriasis, alopecia areata, eczema or lichen planus. 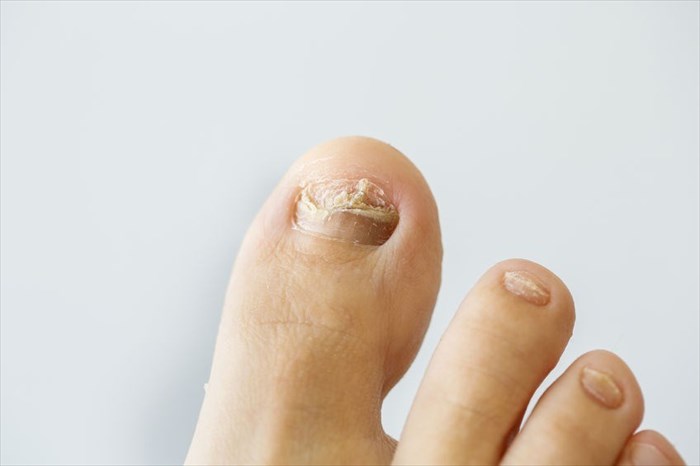 This is an infection of the nail unit (nail bed, nail matrix or nail plate) causing nail deformity, thickening and discolouration. This type of nail infection is also known as tinea unguium. 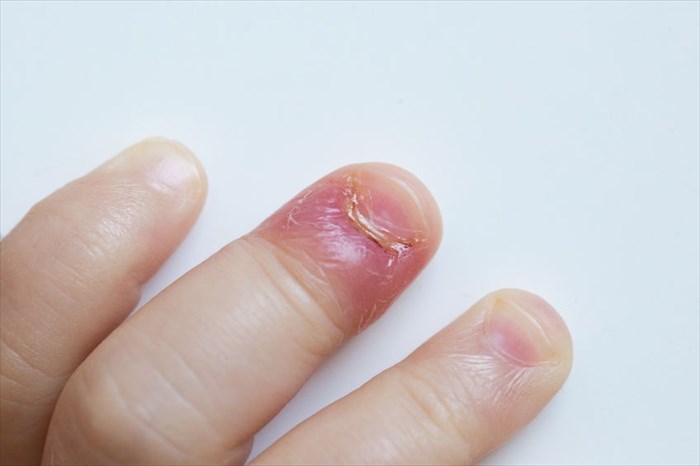 This is an infection of the nail fold and surrounding skin.

Bacterium commonly associated with this type of infection include:

This infection causes the development of fluid-filled blisters on the fingers or toes (including within the nail folds).

Bacterium that are commonly associated with infection include: 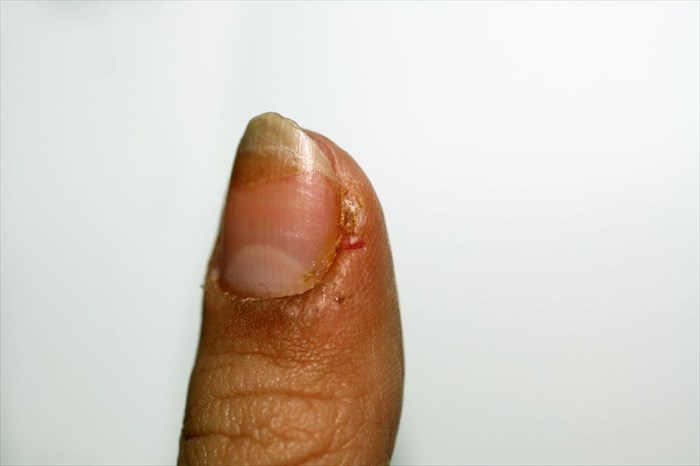 A bacterial infection which results in the development of an abscess in the fingertips (also referred to as the fingertip pulp space). Infection is common in the thumbs or index fingers.

Injury to the fingers after which bacterium have entry access is a common cause. This infection can also occur as a complication of paronychia (an infection of the tissue folds surrounding the nails).

Often a secondary infection, the nail plate develops blue / green discolouration due to the secreted toxins of bacterium causing infection.

Bacterium commonly associated with this type of infection is Pseudomonas aeruginosa.

Infection is most typical in the nail fold but can sometimes affect the nail bed too. The human papilloma virus (HPV) causes this type of infection.

Infection can result in other nail abnormalities such as vertical ridging and nail plate deformity. Warts which occur in the nailbed can also result in the development of onycholysis (nail separation).

Infection as a result of the herpes simplex virus (types 1 & 2). This type of infection is characterised by the development of lesions (whitlow) which can be painful.

Infection commonly affects the fingers but can also affect the toes or nail cuticles.

Tumours which develop in the connective tissues can affect the nail matrix, nail bed or nail folds. This can extend to the nail plate.

Types of fibromas affecting the nail include:

These growths typically affect the nail matrix and are often associated with yellow band discolouration, splinter haemorrhages, vertical ridging and curvature of the nail plate.

Translucent growths most commonly affect the fingers. These nodules can occur along the nail fold placing pressure on the nail matrix. This can result in the development of vertical grooves / depressions along the nail plate. Some discharge from the growth can sometimes leak, reducing pressure.

A vascular growth formation that is prone to bleeding. Growths which develop are more common along the nail fold, forming in the nail matrix but can extend to the nail plate.

This growth is typically characterised by red, purple or blue discolouration which develops beneath the nail plate.  Pain or tenderness and cold sensitivity are associated symptoms.

This type of tumour is more commonly diagnosed on the tip of the large toe. A growth presents as a porcelain white colour and is firm to the touch. Scaling is also present causing some inflammation and redness. Pain or tenderness tend to vary and may not be present in all cases.

These growths typically occur within the nail bed. Longitudinal red streaks can occur as well. Tears in the nail plate can sometimes occur too. The growth itself is generally asymptomatic, however.

Tumours typically affect the nail beds and nail folds of fingernails more often than the toenails. Risk factors include:

Abnormal thickening of the nail plate, inflammation and redness, red streaks on the nail plate and even the formation of warts are associated with this type of tumour.

A variant of this type of malignant tumour is keratoacanthoma, although this is considered to be rare. Pain, inflammation and swelling are common symptoms. These tumours develop quickly and must be biopsied by a medical professional as soon as possible for diagnosis. Destruction of the bone can sometimes occur too.

These tumours which typically develop within the nail matrix are considered rare. Dark streaks or band discolouration are typical, but this type of malignancy can also sometimes present as an asymmetrical or irregular patch with a faint pigmented border on the nail bed or nail plate. Distinctive characteristics include discolouration that initially affects the nails of one finger or toe, initially as small or thin but enlarges quickly, varied pigmentation discolouration, nail fissuring and splitting, as well as discolouration that extends into the nail folds and cuticles (known as Hutchinson sign). 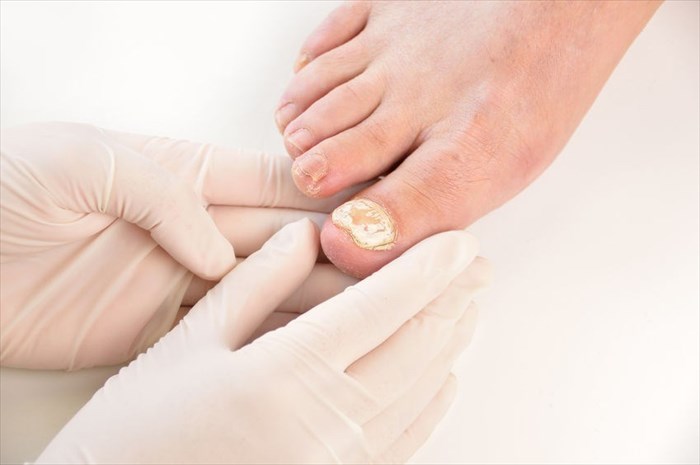 When to worry about nail changes

Changes to the nail are often merely cosmetically displeasing – not all are necessarily harmful or signs of disease or infection. Associated symptoms like pain and tenderness most often prompt a medical consultation, and rightly so. Such symptoms are associated with troublesome abnormalities that should be evaluated to either diagnose a problem or rule one out.

Other signs and symptoms which are worth an evaluation (especially if more than one occurs) include:

When in doubt about any abnormality or change affecting the nails, it is best to seek a medical opinion from a general practitioner or podiatrist. Sometimes a dermatologist can also be helpful in cases where an underlying skin condition or infection may be relevant.

What to expect during a consultation

A typical evaluation will take into consideration the onset of nail abnormality, a patient’s general health history, medication use history and family health history. It may also be helpful to note a person’s hobby interests, occupation and possible exposure to certain topical substances.

Before an examination of the nails will be conducted all substances and applications on the nail will be sufficiently removed. Alcohol or acetone may be used to cleanse the examination surface area. A physician will make use of lighting and magnification. Natural lighting is sometimes preferred over artificial lighting. A penlight is handy for detecting subtle, localised abnormalities on the nail plate surface.

A physician will carefully assess each component of the affected nails, noting abnormalities including discolouration, texture and thickness. The nail bed and nail folds will be examined for changes in colour, signs of lesion or growth development, redness and inflammation, scaling, condition of cuticle attachment and vascular abnormalities.

A physician will also note any identifiable patterns. Where abnormalities only affect one or a few nails, he or she may consider underlying causes to potentially involve injury, infection, circulation disruptions or even tumour development and conditions such as psoriasis or lichen planus.

If an underlying systemic medical condition or skin disease is suspected, an examining doctor may refer a patient to another professional or specialist for appropriate testing analysis in order to make a definitive diagnosis.

A biopsy will likely be recommended in the case of a suspected malignancy. More than one associated irregularity may prompt an immediate biopsy as a means to differentiate between a benign abnormality or a potential malignancy. If irregularities are considered reasonably low risk, a ‘wait and see’ approach for several months may be considered, with potential risk factors discussed and careful monitoring implemented should further changes develop.

A physician may request an evaluation of a patient’s nail care instruments and products at a consultation or that the use of these be discontinue until the follow-up appointment. This can include varnishes, lacquer and other nail applications.

PREVIOUS Health conditions that show up in your nails
NEXT Top tips to better care for your nails
Back to top
Find this interesting? Share it!