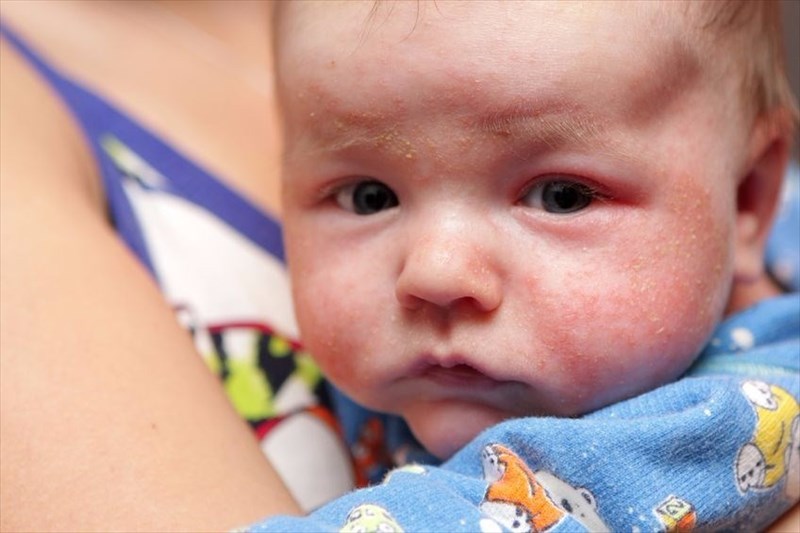 Eczema, rather than being a specific health condition, describes the general term for a reaction produced by the skin in a number of disorders that manifests in the form of a rash.

Eczema is often an extremely itchy skin condition. When the rash is scratched, the skin becomes inflamed (puffy) and red. Eczema can affect both adults and children, however, the majority of sufferers are children who outgrow it by their tenth birthday1. Some people may continue to have symptoms periodically throughout their lifetimes. In some cases, the itching may begin before a rash manifests. When the rash does occur, it normally appears on the back of the knees, hands, face or feet.

The most common form of eczema is known as atopic dermatitis.  It is a long-term (chronic) skin disorder that is the result of an allergic reaction and affects roughly 15-20% of children of school going age globally2, with only 2 to 10% of adults being affected. For this reason, the information that follows in the various sections of this article (listed in the navigation menu above) will pay specific attention to this type of eczema.

The term ‘atopic’ when referring to atopic dermatitis describes a tendency to develop dermatitis (i.e. the skin being swollen, red and itchy) as part of an allergic hypersensitivity reaction. The condition often co-exists with two other allergic conditions, namely asthma and hay fever (also known as allergic rhinitis) or may lead to the development of these later in life in a progression that is known as the 'atopic march'. Approximately 60% of people suffering from eczema demonstrate atopy (a genetic tendency to develop allergic conditions such as asthma or hay fever)1.

Atopic dermatitis generally begins during infancy3 (between the ages of three to six months4) and may continue into childhood. It is characterised by dry, flaky and red patches of inflamed skin on the neck, face and groin. The condition tends to appear in the form of flare-ups which are often followed by periods of healing and remission (disappearance of the signs and symptoms). Remission can last for a few weeks, months and even years.

A number of children outgrow this form of eczema, yet some may still suffer flare-ups into adulthood, although symptoms will usually be less severe.

For those who do not outgrow eczema in early childhood, the associated rash will often change as they age. During childhood and adolescence, an atopic dermatitis rash is predominantly seen in the folds of the affected person’s skin. When reaching adulthood, the rash is usually limited to just one part of the body, for example just the hands or feet.

Atopic dermatitis is not contagious and while the condition can sometimes disappear for a time on its own, there are a number of treatment options available to ease the bothersome symptoms of this disorder. 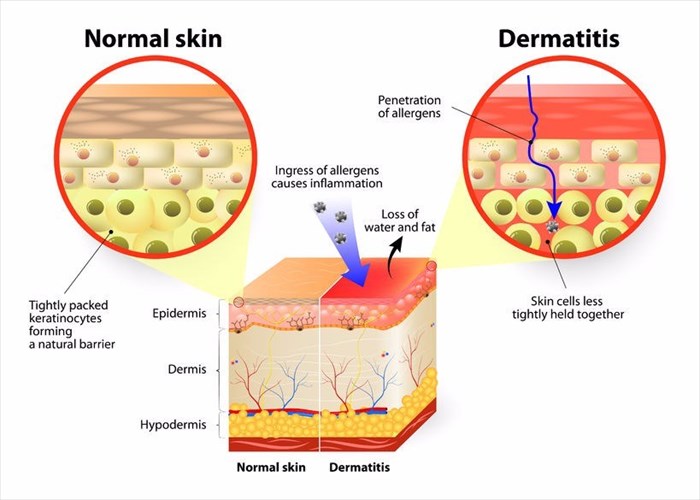 What's the difference between eczema and atopic dermatitis?

Eczema is the nonspecific term for several different types of skin inflammation, also known as dermatitis. There are a few different categories of eczema, some of these include allergic, irritant, contact and nummular eczema.

These types make it difficult to diagnose atopic dermatitis. Those with atopic dermatitis will typically suffer from inhalant allergies (hay fever) and asthma at some point in their lives, although not necessarily at the same time.

NEXT What are the symptoms and signs of eczema?
Back to top
Find this interesting? Share it!

What is dandruff? Is it a contagious condition? Can it ever really be cured? We take a look at defining just what dandruff actually is and outline the best ways to manage its symptoms.

An infection of hair follicles on the skin's surface characterises the condition. An infection causes painful red spots to develop in affected hair-bearing areas of the body. Learn more...

An asthma attack can be a terrifying experience for anyone suffering the condition. An inflammatory disease, asthma is not curable, and typically changes over time. It can be managed - here's how...

Allergies are something many people battle with but do not understand. This article explores all you need to know about dealing with allergens...

Hives are characterised as clusters of swollen, raised welts on the surface of the skin. What causes them? Are there different types? Learn more...