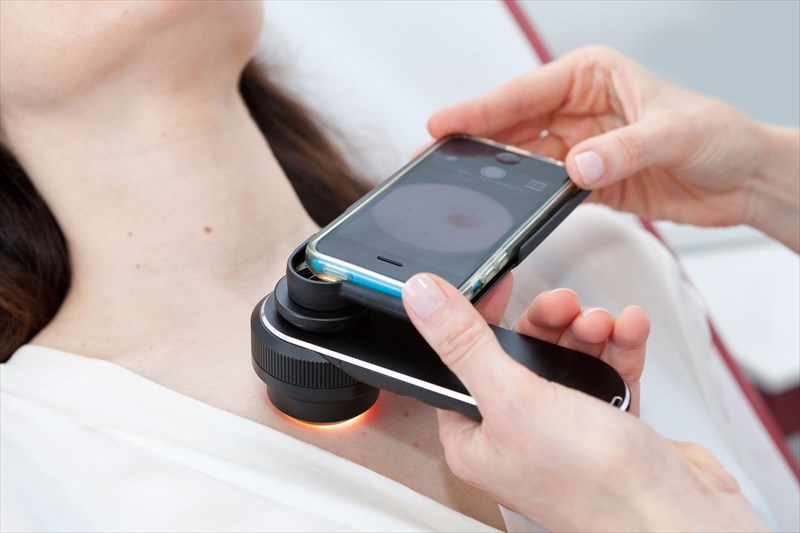 The majority of birthmarks do not require medical treatment, however there are certain factors to take into consideration.

It is advisable to have some marks evaluated, especially if a haemangioma forms, which can sometimes resemble a blood vessel tumour. When it comes to medical assessment, generally those markings which affect a child’s sight, hearing, feeding capability or breathing ability are of concern. If a birthmark causes other problems such as a painful ulcer / open sore, or begins to bleed from time to time, this needs to be attended to by a medical doctor (ideally before becoming infected). Any associated itching, inflammation and pain should also be evaluated as soon as possible, so that a doctor can rule out or diagnose any potential problems accurately and treat these appropriately.

A doctor will also likely want to monitor any markings that are identified near a bodily orifice. Although rare, some types of birthmarks have been linked to various medical conditions that involve growths in the lungs, liver, intestines and stomach.

A baby born with a particularly visible birthmark can be distressing for parents, and perhaps later on for the child too, but for the most part, a birthmark stabilises as a child grows and typically doesn’t cause any real problems. Many marks fade with age without any medical treatment influence. Others remain permanently.

Most birthmarks can be diagnosed by sight alone. If birthmarks affect the deeper skin layers (especially vascular marking forms), imaging tests can be useful for diagnosis. Suggestions a doctor may recommend include an ultrasound scan, magnetic resonance imaging (MRI scan) or computerised tomography (CT scan)11.

An MRI is particularly useful for helping to distinguish between superficial vascular malformations and deep haemangiomas (showing flow characteristics of a mass / marking). An MRI can also help a doctor to rule out or diagnose possible airway problems, eye structure distortions or neurological function issues if a large haemangioma is evident in the facial or neck region of a person’s body.

Ultrasound scans are often used as a monitoring tool as well as for diagnostic screening. Scans may be recommended in the case of steroid therapy, whereby response to such treatment can be carefully monitored. If a person has a large facial haemangioma, ultrasound scans are also useful for assessing potential arterial or cardiac abnormalities (PHACES / Posterior Cranial Fossa abnormalities, Haemangiomas, Arterial abnormalities, Coarctation and cardiac problems (narrowing of the aorta), Eye problems and Sternal clefts (breastbone split), which can occur.

A skin biopsy may be useful for evaluating both vascular or pigmented variations, and especially so in the case of a mole which may display malignant characteristics (growth pattern, colour, texture or shape change etc)12.

Medical treatment is available should a person wish to consider cosmetic removal of the mark. Certain birthmarks can be somewhat disfiguring, particularly red / vascular marks. This can cause some degree of emotional or psychological distress for the affected person, especially if the marking is undergoing rapid growth.

Treatment measures are available with some success, but do not always work and can sometimes be painful. Not all birthmarks should be treated, and some are better left alone. Sometimes a doctor may only recommend treatment options once a child has reached a certain age (normally a school-going age). Treatment may be considered earlier if a marking compromises vital functions. Benefits and risks, the type of birthmark and its specific characteristics, and location on the body will all be considered and discussed beforehand.

Treatment options a doctor can take a person (or a child’s parents) through include:

These medicated injections may be helpful in stunting the growth of a haemangioma, or reducing its size. Steroid hormone medications can be injected directly into a birthmark (alternatively, these can be taken orally), and are slowly absorbed (normally within the course of a month).

Some risks associated with this medication include hypertension (high blood pressure), elevated blood sugar levels, gastrointestinal upset, cataracts or poor growth. Steroid medications given to young children will come with a precautionary warning when it comes to vaccinations. While receiving treatment, a child will be advised not to have shots for measles, mumps, chickenpox, or rubella (German measles) until at least a month following treatment discontinuation.

Topical steroidal creams appear to be unpredictable when it comes to absorption, and are thus not as frequently used in treatment.

This is a protein which can be used as an alternative to corticosteroids, should these not be effective. This treatment also stunts the growth of a birthmark, and can help to shrink its size too.

Radiation, freezing, dermabrasion, sclerotherapy and even tattooing have all be tried for the treatment of port wine stains with varying degrees of success. The most effective treatment for port wine stain birthmarks or others that are fairly close to the surface layers of the skin (like haemangiomas), is generally considered to be laser therapy.

Laser light can only penetrate the skin by a few millimetres, and thus is not an effective treatment method for deeper markings (or those that are particularly thick). Laser treatment is one of the few treatments that destroy the capillaries in the skin without causing further damage to surrounding tissues.

A pulsed dye laser (PDL) technique has been able to achieve some success. Laser/light therapy involves an intense beam of light that is gentle on the skin (i.e. it is targeted at the birthmark but does not damage surrounding skin tissue). The laser treats abnormal blood vessels by targeting the blood itself. Light passes through the outermost layers of skin and is then absorbed into the blood through the chemical oxyhaemoglobin in the red blood cells. This heats the blood up and thus ‘selectively injures blood vessels’, causing them to either rupture (burst) or constrict (shrink). This laser therapy technique can lighten a birthmark by between 70 and 90%, with repeated treatments every one to three months until such time as the desired result is achieved.

Treatment normally follows a thorough medical review and physical evaluation. It is recommended that the patient avoid sun exposure, tanning beds, chemical peels, collagen injections, waxing, the use of perfumes and deodorants, as well as the taking of anti-inflammatory medications, aspirin and herbal supplements, before starting with treatments.

As a non-invasive procedure, recovery and pain or discomfort (including swelling) is temporary and minimal. A person may experience a slight stinging sensation (similar to that of a mild sunburn) for between 4 and 6 hours after a treatment, and a pink or red colouration of the skin for up to 8 hours after a treatment. Cool compresses can help to alleviate any stinging sensations. No potential irritants should come into contact with the skin for at least 24 hours after treatment, this includes the applications of creams, make-up, deodorants or perfumes. The treating doctor will recommend a soothing moisturiser to help keep the skin moist and hydrated.

Some risks are involved with this form of treatment and include skin discolouration, bleeding and scarring. Infection and crusting can also occur. Treatment is considered a cosmetic procedure and may not be covered by medical insurance organisations. It is advisable to consider this before commencing treatment if cost is a factor. 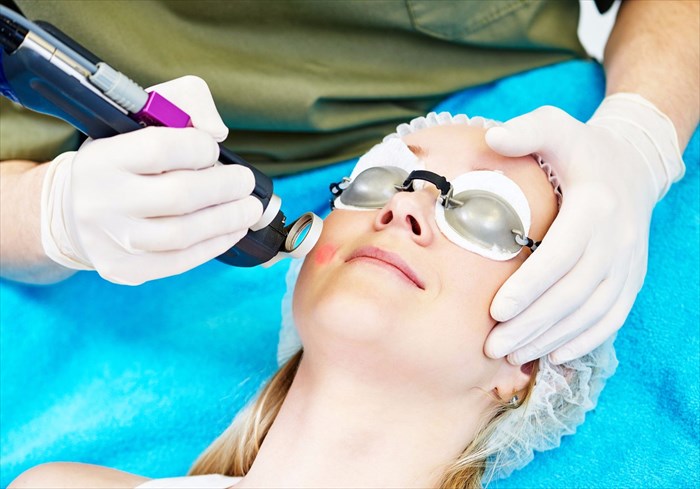 For certain birthmarks like haemangiomas, which cause a medical issue or complication such as a problem with eyesight, surgical removal can be considered.

Surgery can be considered for a severe port wine stain too, especially if the mark becomes significantly hypertrophied (i.e. undergoes a significant amount of tissue enlargement / volume). In this instance, surgery can help to restore symmetry and normal contour by removing redundant tissues. A skin graft may also be performed, covering the site, especially if the birthmark being removed is particularly large.

Usually other therapies will have been administered before surgery is considered. If these are unsuccessful, a doctor will assess the type of birthmark, it’s location on the body and the severity of the complications caused, as well as a person’s age and the type of tissue involved. Birthmarks that naturally regress (fade) can leave a mark that is far less scarring than if surgery is performed on a child who is particularly young. A doctor will carefully assess these specifics with this in mind, should surgery be an option for treatment. 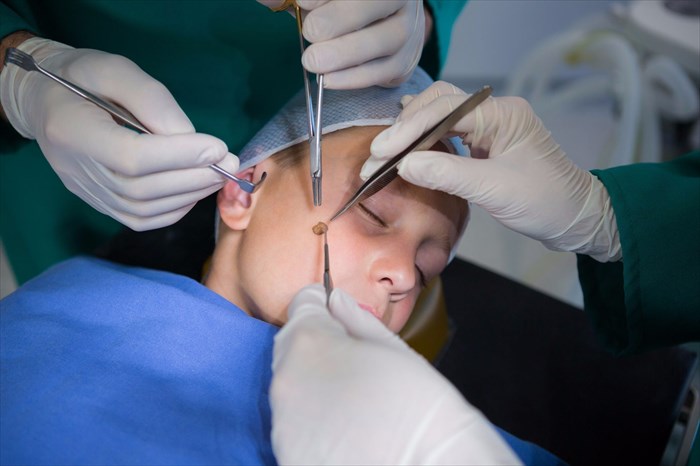 An assessment according to the stage of progression of a birthmark may determine when a surgical excision is performed.

Stages are as follows:

The last phase is ideal for surgery as a marking is not likely to grow again. Should complications develop before this phase, such as ulcerated sores or bleeding, surgery may be considered sooner. The possibility of excessive bleeding, facial nerve injury and significant scarring will also be factors to consider. A hospital stay is generally required, for between 2 and 5 days. A full recovery can be expected within 6 weeks 13. 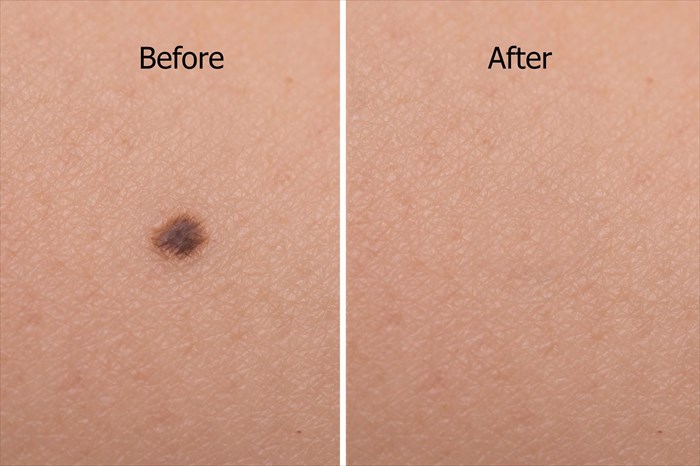 What is the outlook for those with birthmarks?

Birthmarks may not be preventable, but appropriate care can ensure that no real problems develop. Most are harmless in nature, with many fading somewhat in time. Those that do not become physically or emotionally bothersome can generally be left alone without any long-term problems.

For those with birthmarks that are medically treated, risks versus benefits must be discussed with the treating doctor. The treatments available all carry some degree of risk and while outcomes are relative to the individual, positive results can be achieved.

For the most part, skin that is well taken care of (i.e. protected from sun exposure and potential chemical and environmental irritants) should not develop any health complications. Excessive sun exposure should be avoided as darker pigmentation is more prone to absorbing sunlight, and thus increases a person’s risk for potentially developing skin cancer.

It is important to know the type of birthmark present and understand it’s predictable patterns (i.e. is it likely to grow or fade?). Those which require monitoring, such as moles or markings that are located near a portion of the body, such as the eyes, which may interfere with vital function will be identified by a paediatrician or medical doctor.

A person should also be well aware of warning signs, such as rapid growth, itching, dramatic colour changes, oozing or bleeding, and if any of these occur a medical doctor should be consulted as soon as possible. The earlier these symptoms are evaluated, the better they can be medically managed.

PREVIOUS Types of birthmarks and their characteristics
NEXT What complications are associated with birthmarks?
Back to top
Find this interesting? Share it!