What are the signs and symptoms of frostbite? 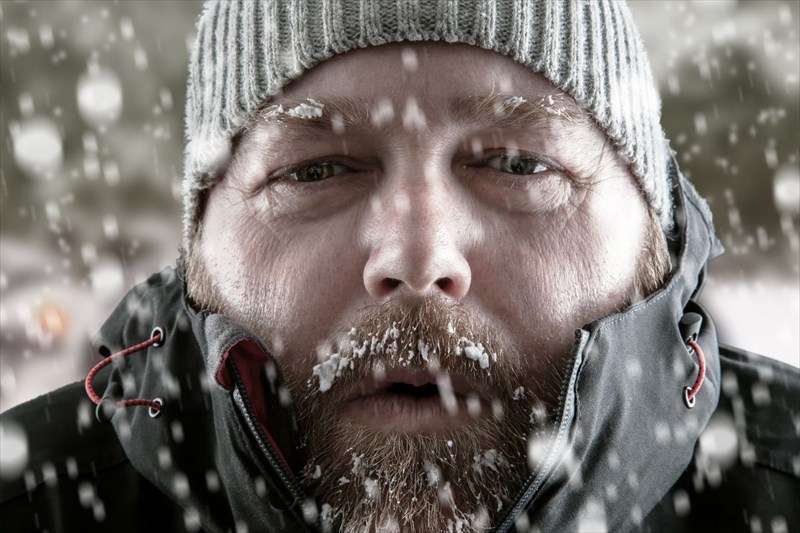 What are the signs and symptoms of frostbite?

To understand the nature of frostbite signs and symptoms, it is best to learn how to recognise the stages of tissues affected by the freezing process…

The initial stage of frostbite > frostnip:

Tissue damage is considered mild / superficial. It all begins with skin discolouration – the skin may turn pale or redden. In either instance, the skin feels very cold and waxy to the touch. Exposure to cold that lingers causes the skin to experience sensation changes – numbness and or / prickling occur in the affected portions of the body.

Skin tissue will feel numb, but soft. Once the skin is warmed, tingling sensations and or / itching, burning and pain may be experienced, as blood flow rushes back to the affected areas. Skin will also become pink or redden. Frostnip is most typically experienced in the earlobes, cheeks, fingers and toes. Discolouration and changes in sensation do not typically result in extensive damage (like necrosis / tissue death) which is irreversible / permanent. Rewarming does restore sensation and normal colour of the skin without long-term effects.

This stage is classified as first-degree frostbite (or grade 1) whereby superficial injury presents as visible signs of a central white region of the skin that is surrounded by redness within the superficial capillaries (this is known as erythema and occurs as a result of excess blood supply being carried in the vessels / hyperaemia). No cyanosis (i.e. blue discolouration) typically occurs during this stage.

Progressive stages and their related symptoms …

If exposure to cold continues for a longer period of time, the condition moves into the superficial stage. Skin that has reddened will now begin to pale or turn white. At this stage ice crystals begin to form on the skin, which remains soft to the touch. Should rewarming occur at this stage, further skin discolouration known as cyanosis occurs wherein the skin is blue or purple in colour and has a mottled appearance.

Changes in sensation also involve some burning or stinging, and the area may begin to swell due to an accumulation of fluid in the tissue cells (this is known as oedema). Within approximately 24 to 36 hours of rewarming, clear or cloudy fluid-filled blisters may develop. If the skin is pressed, there will be some signs of resistance (i.e. firm-feeling skin with soft underlying tissue).

Such signs indicate second-degree frostbite (or grade 2). Blisters may form an eschar (i.e. piece of dead tissue) which is normally shed from the body but will reveal new connective tissue and microscopic blood vessels (no tissue loss occurs). Some cyanosis may occur during this stage but is merely confined to the fingertips (distal phalanx), fingernails or toenails.

At this stage, frostbite goes beyond the skin layers and begins affecting the tissues beneath (including the tendons, nerves, muscles and even bone). It is at this point that all sensation of cold, discomfort and pain may be lost resulting in complete numbness. Muscle and joint function may also be lost (as these become frozen), and the affected person will experience difficulty with movement.

Rewarming which takes place at this stage (helping to restore blood flow) results in the formation of smaller blisters (sometimes containing blood and other fluid) and painful, throbbing sensations, including paraesthesia / burning and prickling sensations (which may last for at least and up to a few weeks or months when tissue separation occurs). Hyperaemia (an excess of blood supply) also occurs and can last for several weeks. These haemorrhagic blister formations indicate third-degree frostbite (or grade 3) and could rupture or burst. Black eschars may also form. Frostbite at this stage is also indicative of cyanosis affecting the proximal and intermediate phalanges of the toes (i.e. the largest bones in the toes).

Fourth-degree frostbite (or grade 4) is marked by affected areas beginning to show signs of necrosis by turning yellow, blue, grey or black, and becoming hardened (much like wood) – sometimes only after being rewarmed and treated by a medical team of professionals. This stage of frostbite progresses to the muscle and bone tissues and can result in permanent damage which affects all layers of the skin, as well as cyanosis of the carpal and tarsal bones in the hands and feet. Complete tissue necrosis can occur. A black scab-like crust (or eschar) may develop within several weeks of cold exposure. The development of gangrene places a person as considerable risk for infection. At this point the extent of tissue damage can be carefully evaluated and determined. If skin is pressed, there will be no signs of resistance at all (firm-feeling skin, as well as underlying tissue – hard and solid).

This stage of frostbite can result in some symptoms over the long-term, whereby a person will experience sensitivity to cold, loss of sensation and hyperhidrosis (excessive sweating).

When to seek medical attention

All instances of frostbite, must be attended to by a medical professional as soon as possible. Once the skin becomes painful (and increasingly so), hard to the touch, and shows signs of discolouration associated with necrosis (or the development of blisters with signs of cyanosis - dark blue or black discolouration just beneath the skin’s surface), or if these signs are accompanied by symptoms such as fever, oedema (swelling accompanied by redness or a discharge in the affected areas), as well as dizziness, the affected person must get to an emergency room urgently.

Frostbite can also occur alongside hypothermia (a life-threatening condition wherein body heat is lost at a faster rate than the body can produce on its own, rendering it incapable of rewarming itself which adversely affects heart, organ and nervous system function)

Signs of hypothermia include:

If this occurs, it is considered a medical emergency and will take precedence over frostbite treatment in a medical setting.

The degree of complications experienced due to frostbite are largely determined by the extent of the injuries sustained.

PREVIOUS What causes frostbite?
NEXT Frostbite versus hypothermia – what should you do
Back to top
Find this interesting? Share it!