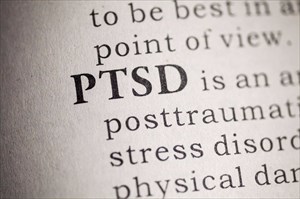 As the name suggests, post-traumatic stress disorder (PTSD) occurs as a result of an experienced or witnessed traumatic event, or a perceived threat of danger, injury or even death. Many instances of PTSD follow major life-threatening events, such as a natural disaster, war or combat, an accident causing physical harm, assault or physical abuse, and sexual abuse. Any trauma with a heightened sense of danger, which results in debilitating anxiety can lead to PTSD.

The condition spiked during periods of war in recent years, and became known as ‘battle fatigue’ or ‘shell shock’ syndrome. A high number of war veterans experience PTSD, but the disorder can be experienced by anyone who is exposed to a level of trauma that triggers such a reaction. PTSD is also not uncommon amongst rescue workers and emergency personnel who are continuously exposed to the results of traumatic events.

PTSD is not a condition which may be stereotyped to a specific type of character flaw or behavioural weakness but is rather a response to trauma that effectively triggers a chemical change in the brain. The result of the chemical change? A person experiencing this severe anxiety disorder is unable to respond in a normal ‘fight-or-flight’ mode and can become severely fearful, even at inappropriate times when they are not in any danger at all.

The effects of this severe fear bring about a sense of helplessness and even horror. Fear that is experienced is intense. Other normal emotional responses such as anger, apprehension, shock, and guilt do not generally subside for a person experiencing PTSD, they continue and often intensify. The intensity of fearful emotions (terror) can severely impact a person’s ability to lead a normal life. A PTSD sufferer will have great difficulty in comfortable day-to-day function, finding adjustment post event difficult due to frequent trauma flashbacks, severe anxiety, intense nightmares, sleeping problems and uncontrollable thoughts. A PTSD suffer often feels estranged from normality and detached from others and their surroundings.

Such adjustment difficulty and lack of effective coping responses can occur for at least four weeks to several months and even years. Not all PTSD symptoms begin shortly after a traumatic event. Some develop symptoms after a period of time, and for others intense stress reactions come and go over time. Symptoms do not ‘go away’ on their own and most often intensify over time.

It’s important for PTSD to be diagnosed in order for treatment to be implanted in a way that improves a person’s quality of life. Additional disorders are not uncommon in a person suffering PTSD, these include depression, and a variety of other problems which result in substance abuse and addiction.

Memory and cognitive ability can become severely compromised, adding to severe stress reactions.
Medical intervention can help a person to learn better coping skills and ultimately be able to function normally on a day-to-day basis. Treatment can also have positive effects on a person’s ability to engage with others and teach ways and means to help a person improve relations in the family and their social life. This extends into areas of occupation as well. The earlier intervention takes place, the better for the sufferer of PTSD as this can dramatically reduce the long-term effects of this mental disorder.

What happens to cause post-traumatic stress disorder?

Traumatic events affect people differently. To date, it is not fully understood why feelings of shock, anxiety, fear or guilt appear to subside in time for some, and for others intensify to a debilitating degree.

It is generally felt that the development of PTSD is likely a result of a complex mix of the following:

NEXT Signs and symptoms of post-traumatic stress disorder (PTSD)
Back to top
Find this interesting? Share it!

Suffering from a runny tummy? Having diarrhoea can often be an embarrassing and even painful experience. Find out all you need to know about dealing with and combating this condition here...

Anxiety is a psychological, physiological, and behavioural state that may cause a sufferer intense distress. Here's everything you need to know...

Addiction is defined as a chronic dysfunction in the brain that typically involves motivation, memory and reward. What are the most common types?