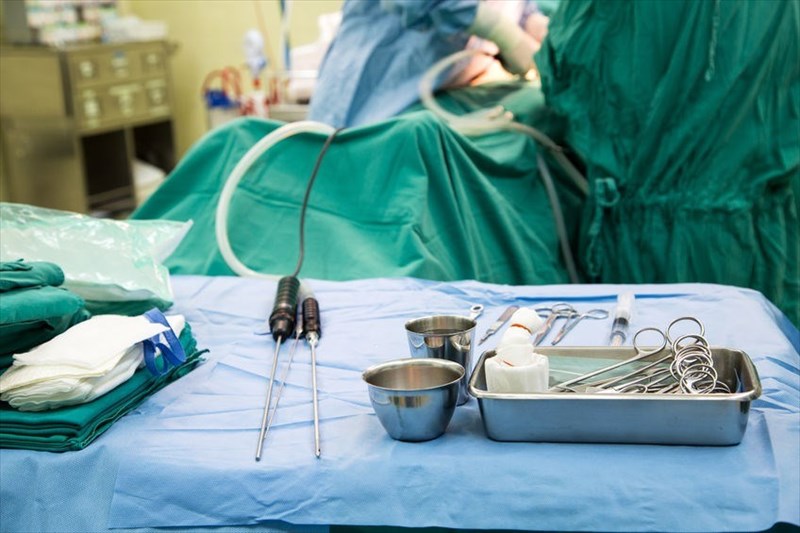 Liposuction as a surgical technique debuted around the late 1970s when it was noted that a cannula could be used as a tunnelling method that could extract or remove localised fat deposits. This technique meant that long incisions (cuts into the body) were not required and thus reduced the recovery time for the patient significantly. From the original tools, hollow, blunt-tipped cannulas were developed, connected to a closed suction system (suction-assisted liposuction / SAL). The techniques and tools used have consistently been modified so as to improve the aesthetic result for patients, as well as minimise the risk of complications, especially that of bleeding.

Liposuction techniques have, through the years, been used with several wetting solution methods as a means to extract fatty deposits. The main aim of IV administered wetting solutions is to provide the body with maintenance fluids during the harvesting process and replace any pre-operative deficit.

The primary difference between the wetting solutions is the amount of intravenously administered fluids given to a patient during the procedure, as well as the volume of blood loss which occurs as a result (this is measured as a percentage of the removed fluids).

The different wetting-related solutions are: (3)

* Dry and wet type solutions are no longer commonly used due to their higher levels of blood loss during a liposuction procedure, which increases complication risks considerably. 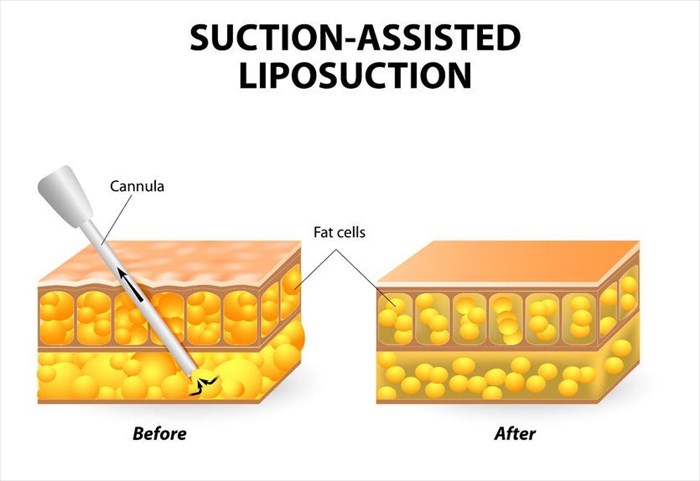 The tumescent liposuction (‘to swell’) technique

This technique is widely used and involves injecting large amounts of medicated solutions (fluid) into targeted areas where fat is intended to be removed. As the name suggests, this technique involves the administration of fluid solutions in order to achieve a ‘swollen and firm’ effect, and thereby significantly reduce blood loss during the procedure.

The fluid solution normally consists of a local anaesthetic (such as lidocaine – also known as lignocaine or xylocaine), a drug which causes blood vessels to contract / constrict (such as epinephrine) and a salt (sodium bicarbonate) liquid - given intravenously. The quantity of injected fluid can amount to three times that of fat which is removed.

Anaesthetic is needed in order to numb the targeted body areas during surgery and for a short time thereafter. Drugs which contract blood vessels (known as vasoconstrictors) reduce blood circulation to the body’s tissues, delaying the absorption of the anaesthetic, and thus assist in reducing any blood loss, bruising and swelling during and after the procedure. The IV salt solution aids in making for easier removal of fat during the procedure. It also helps to reduce burning sensations (by raising the body’s pH level) which can be felt when fluid solutions are injected during the procedure, as well as facilitates the rapid absorption thereof into the nerve cells.

Tumescent liposuction may take some time to perform, sometimes longer than that of other liposuction techniques as the fluid required to perform this procedure is slowly injected in stages. This technique is most effective when fatty deposits occur in well-defined, localised areas. A surgeon may also consider using this technique in the case of certain conditions. These include:

Advantages of the procedure include:

Commonly targeted areas of the body in liposuction procedures

Some surgeons may consider this technique as an alternative to that which is used for breast reduction, however, this is currently regarded as fairly controversial.

A relatively new spin-off technique, known as water-jet liposuction (or water-assisted liposuction / WAL) makes use of fan-shaped water jets, called Body-Jet. These jets effectively administer a gentle jet of fluid (comprised of tumescent solutions and water) which breaks down the fatty tissue deposits being targeted and separates fat cells from the surrounding connective tissues, stimulating aspiration (removal) thereof. The process is considered to be ‘gentle’ as the technique has a minimally damaging effect on surrounding tissues, nerves and blood vessels.

With this technique, a surgeon is able to better control the simultaneous administration of fluids (without ‘flooding’ the body all at once) and fat harvesting using minimal amounts at a time. The reduction in volume exposure to tumescent fluids contributes to lower levels of swelling, reduces surgery time and allows the surgeon more ‘real-time’ flexibility in achieving a patient’s desired contouring results. General anaesthesia may also not be necessary.

Other liposuction techniques and related modifications

Methods used in this technique are similar to those of tumescent liposuction in that fluid solutions are used. The quantity of fluid administered however, the distinctive difference. Where the fluid ratio used in the tumescent technique is more than that of the fat removed, in this instance, the injected quantity is equal to that of the tissues extracted.

This means that the technique takes a little less time, but still requires sedation of the patient – either in a local (leading to slight drowsiness) or general (completely asleep and unaware of the procedural happenings) anaesthetic capacity. 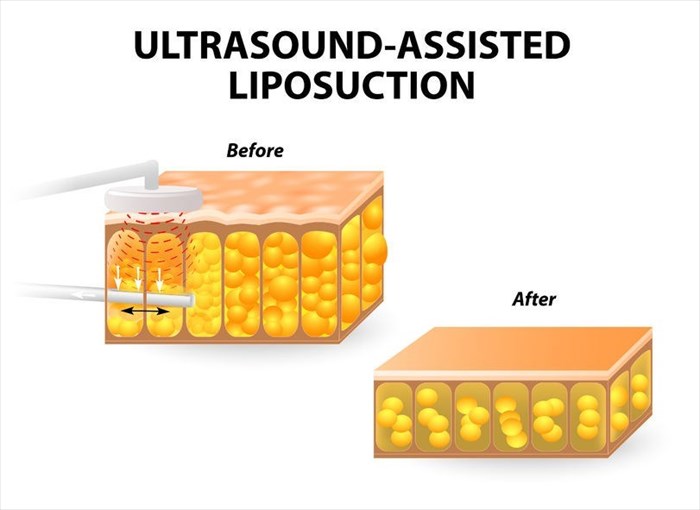 This technique requires the application of high-frequency ultrasonic energy administered (or delivered) to wetted tissues. In this technique a surgeon makes use of ultrasonic vibrations as a means to liquify targeted fat cells in the body (weakening their structure and causing them to burst or rupture). The frequency of the ultrasonic vibrations creates ‘bubbles’ (microcavities) within targeted low-density tissues (including fat and water), resulting in the disruption of the fat cell membrane.

Fat cells are considered low-density tissues in the body, which means their molecular cohesion capabilities are low. The ultrasound technique encourages an accumulation of negative pressure and energy, causing the microcavities to enlarge and form gas bubbles, which are unstable in the low-density tissues (fat). Instability results in expansion and contraction, which is aided by the moist environment. The bubbles absorb energy resulting in a higher rate of expansion than contraction, ultimately causing them to burst. Connective and muscle tissues are not negatively impacted by the imploding bubbles (emulsification by microcavitation) as they are denser structures. These liquified cells are then vacuum-extracted (in a process known as aspiration removal).

Prior to surgery, a surgeon will discuss the available methods of administering these vibrations with a patient. This is because the technique involves two ways to achieve this:

Both applications are useful for removing fat deposits from the dense, fibrous portions of the body, like the upper back or enlarged (male) breast tissue. This technique can sometimes be used as a follow-up procedure to an initial tumescent liposuction when further fat removal is required. As a secondary procedure, a surgeon can sometimes achieve higher precision levels. The technique does not require as much time to perform as the tumescent approach but can take a little longer than the super-wet technique.

There is a higher risk of seroma formation (a pocket of clear serous / inflammatory fluid containing blood that has leaked from blood vessels) or burns on the skin (cutaneous wounds) associated with this liposuction technique type. This is because the technique involves generating a significant amount of heat in order to work. Heat will only be applied in a wet environment where temperature can be controlled at levels that can still achieve cell liquification, and the energy applied to the cannula only while it is directly in use – this should help to alleviate risk of burns.

In terms of results, ultrasound-assisted liposuction may be able to achieve improved contouring and a smoother effect.

Internal UAL may be considered a secondary procedure to the more commonly used liposuction techniques, rather than an alternative option. It may be able to achieve satisfactory results in more fibrous areas (dense tissues) of the body – the back, upper abdomen, posterior hip rolls and in men with gynecomastia (man boobs).

External UAL can have some favourable body contouring capability as a liposuction technique, especially so for patients with dense (fibrous) cellulite which has been a problem for some time. Dense breast tissue (fatty and connective tissues) in men is another option for consideration using this technique as it loosens cell-to-cell interactions and modifies the structure of collagen. This makes it easier for fatty deposits to be removed via liposuction (with minimal scarring).

The application of external ultrasound helps to soften and disrupt fatty tissues, which then assists in facilitating the suctioning phase of the procedure and improving the quality of the harvested tissues (there is less blood in the harvested aspirate). It is also a more tolerable process for a patient – both during and after the procedure.

As the ultrasound probe is used externally, there is no physical contact with internal tissues, resulting in significantly less blood loss. Other benefits include easier access through scar tissues, as well as being able to treat larger areas of dense tissues including the abdomen, flanks and thighs (this sometimes includes body portions which may be difficult to treat with the more commonly used liposuction techniques).

A fairly new technique, power-assisted liposuction (PAL) reduces the workload for a surgeon by limiting the number of physical movements required to perform the surgery. The technique involves a motor-driven cannula (a small, rotating blade located at the very tip of the cannula) that is attached to the normally used vacuum or aspiration equipment.

The modified tools also help a surgeon to better remove fatty deposits from particularly challenging or tight portions of the body (with physical space constraints) without the need for more forceful movements.

Laser-assisted liposuction (LAL) also involves the liquification of fat cells, but with the use of laser energy (low energy waves). Once again, liquified cells are vacuumed from the body or drained through small tubes. The tubes / cannulas are smaller than those used in the tumescent liposuction technique. A surgeon may opt to use this technique if fatty deposits can be better removed from confined body portions – like those of the facial area, including the jowls and chin.

The procedure reduces the physical movement required by the surgeon, making the procedure more comfortable to perform. It can achieve higher volumes of fat removal and reduced periods of recovery downtime for the patient and also results in less swelling or bruising.

The energy generated by the laser (through the skin and deeper dermis layer) has been noted to stimulate collagen production in the skin somewhat and this may help to reduce possible sagging side-effects (by boosting the fibre-like proteins involved in maintaining skin structure).

This technique may also be referred to as SlimLipo, SmartLipo or CoolLipo.

In the traditional sense, deep layer fat deposit extraction defines liposuction treatment. There are times when a surgeon may consider superficial layer liposuction, most often to try and improve the contour of the skin affected by cellulite or laxity (sagging – also referred to as flaccid skin).

Superficial methods involve the use of a thin cannula. With this narrow tube, a surgeon will pass over subdermal fat deposits in a targeted area with numerous closely-spaced suctions to try and stimulate skin retraction. Cellulite on the thighs may best respond to superficial treatment.

Areas where superficial liposuction may be effective include:

PREVIOUS Why is liposuction performed?
NEXT What risk factors and complications are associated with liposuction?
Back to top
Find this interesting? Share it!