What are the different types of periodontitis? 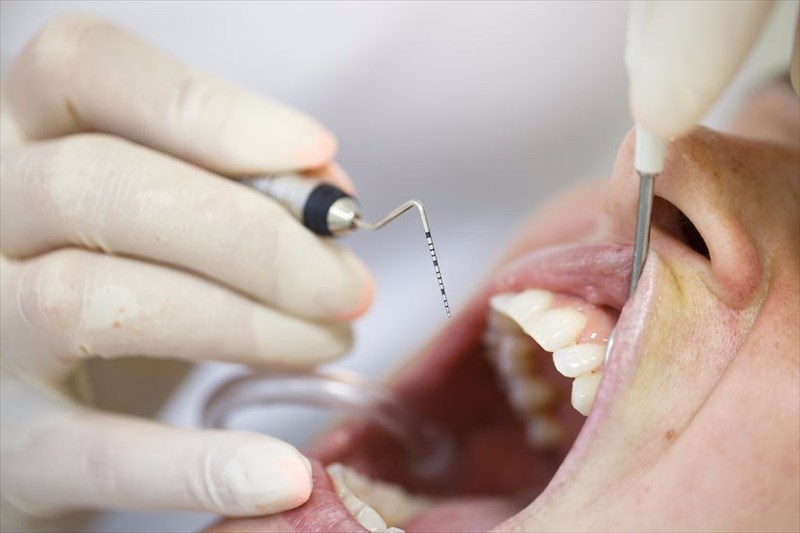 What are the different types of periodontitis?

Periodontitis begins when the toxins from plaque start to attack and damage the soft gum tissues that surround your teeth. The bacteria implants itself in the gingival tissue (gums) and then breeds at a rapid pace, causing a bacterial infection.

If the infection progresses, the bacteria burrows even deeper into the gum tissue and results in irritation and inflammation of the gums and teeth. Due to the body’s immune response which attempts to destroy bacterial invader, the infected tissues are targeted, which is why your gums recede. This results in the pockets becoming larger and eventually, the jawbone can also recede, leading to your teeth becoming unstable and loosening.

We have mentioned the stages of periodontitis. However, there are a number of different ways in which periodontal infections can manifest. All of these infections will require immediate treatment and action by you and a dentist, or a periodontist (specialist in periodontal diseases and infections) in order for the progression of the infection to be halted and bone and gum tissue to be saved.

The following are some of the most prevalent forms of periodontitis (periodontal disease), as well as a brief overview of the treatments needed for each one:

By now you should already have a clear understanding that gingivitis is the predecessor of periodontitis and is a result of the toxins found in plaque and the bacteria that if left unchecked can also lead to periodontitis.

Those with an increased risk of gingivitis developing are those who:

The above list involves those who may experience hormonal fluctuations or imbalances due to certain medications or conditions, which can disrupt the natural level of bacteria in their mouths.

The treatment for gingivitis typically involves a combination of professional cleaning and person oral hygiene and care. Gingivitis is a mild form of gum disease and is easily preventable. Your dentist or an oral hygienist may also perform deep scaling and root planing to cleanse the pockets that are full of bacteria and debris. A mouthwash and antibiotics can also be used to eliminate any of the remaining bacteria and allow for the pockets to heal.

This is the most prevalent form of gum disease and occurs commonly amongst those over the age of 45. Chronic periodontitis is marked by the gum line being inflamed which leads to the progressive destruction of both the bone and gum tissue. It often seems as though the teeth are growing in length, however, this elongation is actually due to the recession of the gums.

The treatment for chronic periodontitis typically involves antibiotics coupled with root planing and scaling. Unfortunately, the damage done to supportive tissues cannot be reversed, however, the progression of the infection can be halted and further damage prevented.

It may sometimes be necessary for a dentist or periodontist to perform a surgical treatment such as a pocket reduction. Tissue and bone grafts are also used to improve the appearance of your oral cavity and strengthen the supporting bone where necessary.

When periodontal disease is aggressive, it is characterised by a rapid loss of bone and gum tissue and attachment. The infection is similar to that of chronic periodontitis, however, the progression takes place more rapidly. Those who have a genetic predisposition (family history) of the disease or are smokers have a higher risk of developing this type of infection.

The treatment for aggressive periodontitis is similar to that of chronic periodontitis, however, those with this condition are more likely to need surgery of some kind. This infection is also harder to eliminate and treat.

Dentists will opt for scaling procedures, antibiotic administration and surgery as a combination treatment approach. A laser procedure may also be performed to try and save the valuable bone and tissue. A dental laser will be used to remove the bacteria and inflamed gum tissue surrounding the roots of the teeth.

In some cases, periodontitis may be the result of a certain condition or disease that is affecting your body. The characteristics and behaviour of periodontitis will be dependent on the underlying disease or condition.

Diabetes, heart disease and respiratory disease are common co-factors for gum disease.  Bear in mind, however, that there are a number of other conditions that may also play a role in its development.

**My Med Memo – The term ‘systemic’ refers to the body’s entire system. A systemic disease is, therefore, one that has an impact on several of your organs and tissues or affects your body as a whole. Therefore, the above-mentioned conditions affect a number of organs and tissues (not just one) and thus the entire body, meaning their influence on your oral health may be severe and play a role in the development and/or progression of gum disease.

Certain medical conditions can accelerate and intensify the progression of gum disease even where there is very little plaque coating the teeth.

The relationship between systemic and periodontal disease is one that could be a pivotal factor when conducting further research into the cause of periodontal infections.

The treatment for situations such as these will begin with treating and controlling the systemic condition responsible for gum disease first and then addressing the resulting secondary conditions.

Your dentist will attempt to stop or slow down the progression of the gum disease through the use of treatments similar to those used to control chronic and aggressive periodontal disease.

This is a form of gum disease that rapidly progresses and is commonly seen amongst those who suffer from immunosuppression (i.e. suppression of the immune system caused by diseases such as HIV/AIDS), malnutrition, chronic stress, smoke cigarettes and other tobacco products. Necrotising periodontitis is a very rare condition.

Necrosis refers to the death of tissues, this is often seen to affect the gingival (gum) tissues, the periodontal ligament, as well as the alveolar bone (bone holding the teeth in place).

The treatment process for necrotising periodontitis (gum disease that causes tissue death), will typically involve a dentist consulting with a doctor before treatment is commenced. Root planing, scaling, mouthwash (medicated), antibiotics, as well as fungicidal medications will generally be administered as the treatment for this condition.