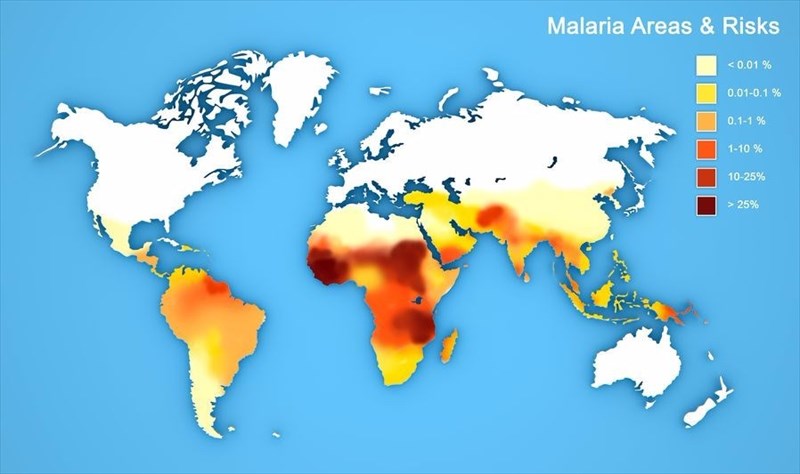 The biggest risk factor associated with malaria is location. Where the malaria carrying mosquito is rife, many subtypes of parasites exist. The highest number of malaria cases with the deadliest of associated infection complications are most notably seen in the Asian subcontinent, African countries (south of the Sahara Desert), Haiti, the Solomon Islands and Papua New Guinea.

The CDC (Centers for Disease Control and prevention) consistently updates their world map with areas known to be high-risk. This is especially useful for those who frequently travel or who live in these locations. You can view the map here.

Those at highest risk include:

A lack of knowledge, particularly in areas with high poverty rates and little to no access to sufficient health care can also lead to high numbers of fatalities as a result of malarial infections.

It is also possible that people, who are exposed to the condition so frequently (in high risk areas), become partially immune and sometimes experience milder symptoms when infected with malaria. Still, all cases of malaria must be treated by a medical professional.

It is also possible for malarial infections to relapse, causing an infected person to experience symptoms again. This is most commonly noted in some parasite varieties causing milder symptoms.

When complications happen, the results can be severe. The biggest concern in all malaria related diagnoses is preventing another fatality.

The highest number of fatalities related to malarial infections happen in Africa (almost 90%). Children under the age of 5 make up the largest portion of those who have lost their lives as a result of malarial infection. When the parasite in the bloodstream results in damage to the organs of the body (in particular), serious life-threatening complications occur.

PREVIOUS How does malaria affect the body?
NEXT Diagnosing and treating malaria
Back to top
Find this interesting? Share it!