Signs and symptoms of vitiligo 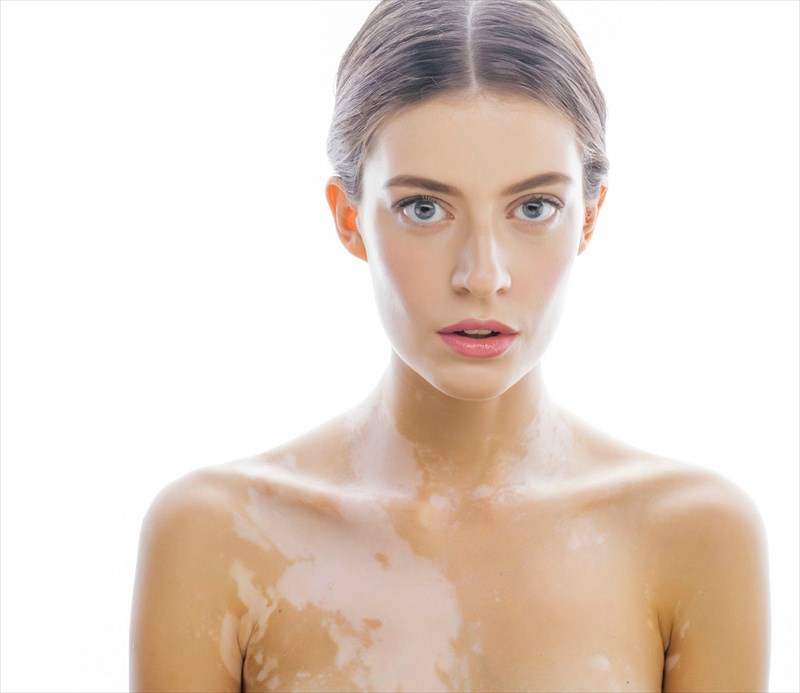 Signs and symptoms of vitiligo

Loss of skin colour is the primary characteristic trait of vitiligo. Onset is most typical in areas of the body that are generally exposed to the sun such as the facial area, neck, limbs, hands and feet. Vitiligo may begin as a tiny spot of lightened skin, which gradually becomes paler (as it grows) until it turns completely white (most often described as milk-white).

Patches can display more than one colour:

Patches are somewhat irregular in shape (but are commonly round, oval or linear), and are very distinctive (with obvious margins which may be convex / curved like the exterior of a sphere). These well demarcated margins or edges can become a little inflamed giving them a slightly red tone, which can cause some itchiness. It is, however, very rare for the affected skin to become itchy, dry or painful as a result of the condition. For most, patches do not display sensations. Affected skin areas are sensitive to sunlight (photosensitive), more so than pigmented areas of the body.

For many no other symptoms are present other than depigmentation that affects the skin and related structures.

General signs and symptoms of vitiligo can be broken down as follows:

There is no distinct way to predict the pattern of patches that develop, or if they will spread and to what extent spreading will take place. The type of vitiligo also comes into play here, providing clues. For some patches are small and localised, and may never increase dramatically in size. For others, patches appear to spread to other portions of the body. For some, spreading is a slow process, taking many years. For others, spreading occurs over a shorter period of time, sometimes in a matter of weeks before becoming stable for a few months or even years. Macules (patches) generally enlarge centrifugally (away from the centre or axis of the patch).

Normally, if the first patches that present are symmetrical, it is likely that the condition will be classified as non-segmental vitiligo. Sometimes a handful of small white dots develop and no more, other times larger patches develop and join others, effectively producing bigger areas of skin depigmentation. 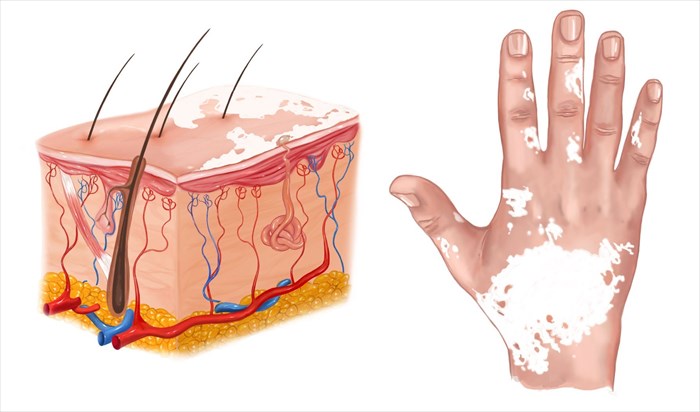 Characteristic differences between non-segmental and segmental types of vitiligo include:

The distribution of vitiligo patches typically follows the trigeminal nerve - the fifth cranial nerve which is linked with sensation in the facial area, as well as with functions of biting and chewing. The pattern of macules / patches is generally described as dermatomal or quasi-dermatomal and does not cross the midline of the body. Macules very rarely spread beyond the affected dermatome (i.e. area of skin that is supplied by a spinal nerve, relaying sensation), typically stabilising within about a year of formation.

This type of vitiligo most often develops during childhood and can sometimes involve the breaking down of melanin producing hair follicles as well (leukotrichia), resulting in colour loss (i.e. white hair).

When multiple areas of the body display unilateral or bilateral macule distribution this is sometimes referred to as ‘pluri-segmental vitiligo’. Distribution also stops at the midline and typically follows a dermatomal pattern.

When to consult a doctor

Losing colour in the skin, eyes or hair can be worrying for most. Many may not seek medical treatment since the condition does not present any particularly bothersome characteristics, like physical pain or inflammation and other sickly symptoms such as nausea or vomiting.

The appearance of skin changes alone does indicate something which should be checked. There are other conditions that can resemble or be mistaken for vitiligo. In order to determine an accurate diagnosis, a medical doctor (dermatologist) will need to conduct a thorough evaluation. Medical doctors and dermatologists in particular, are able to advise on treatment for the condition, which involves ways to potentially slow down the discolouration process or even return some pigment to areas where it has been lost.

Conditions which can be mistaken for vitiligo include:

PREVIOUS What causes vitiligo?
NEXT How is vitiligo diagnosed?
Back to top
Find this interesting? Share it!