Is blue light all that bad for health and well-being? 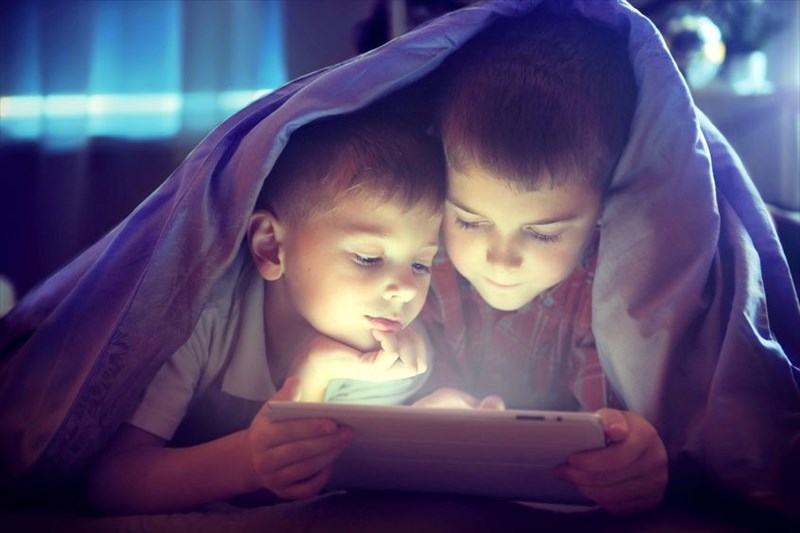 Any light exposure at night can influence the secretion levels of melatonin. Harvard University researchers have found over the years, that blue light does so too, and more powerfully. In research testing, comparable brightness levels of both blue and green light exposure were assessed (up to 6.5 hours of exposure each). Blue light resulted in melatonin suppression for twice as long as did green light, and shifted circadian rhythms by twice as much too. Where green light had an interference impact of 1 and a half hours, blue light showed a 3-hour difference.

Many a study has been done, introducing different variables and addressing all sorts of questions (even the testing of eyewear that blocks blue light), and most conclude the same – blue light is a potent suppressor of melatonin.

Why has this raised alarm bells?

Technological advancements are continuously developing a serious dependency on devices that promote screen time, and especially so during night time hours. Modern society is virtually consumed by screens – in the workplace, in the home and integrated with overall lifestyle, everywhere we go. TVs, mobile phones, tablet devices… you name it. Modern lifestyle is doing more to promote ‘staring into the depths of technology for hours’ than it isn’t.

So, what’s the problem? In short, blue light, and all of its potential side-effects. There’s a good side to blue light, however. It may come down to the timing of use.

Natural blue light radiates from the sun. This natural process is important to maintain our circadian rhythm and keep it functioning as it should each and every day. In essence, it is this blue light that strongly influences and regulates our sleep and wake cycles every 24 hours.

Research has indicated that we, due to modern lifestyle, are becoming increasingly overexposed to blue light through increased computer usage, TV watching and use of mobile phone screen time. This is thus impacting our natural sleep and wake cycles and having adverse effects, overall, on our general alertness and wellbeing.

For nearly a decade, research has been toying with the adverse effects of blue light overexposure. Not only the general public living a regular lifestyle are showing signs for concern. Even those in the medical field, such as doctors and nurses who do shift work in medical facilities are affected. One such concern is the increased risk for melanoma (a severe form of skin cancer).

How is overexposure to blue light a cause for concern?

Exposure to blue light at inappropriate times for the body tricks it into ‘thinking it is meant to be awake’ and effectively disrupts the cycle flow. Physically, the body doesn’t sufficiently prepare for slumber and impacts the quality of sleep we are able to get. Even if you are managing to get in 8 hours of sleep overnight, the quality may be lacking and thus means that it will prove difficult to function properly in the day ahead.

The impact of disrupting the body’s natural biological clock (physiological process) affects not only sleeping and feeding cycles, but also brain activity, cell regeneration and hormone production. Effectively, overexposure confuses the hypothalamus in the brain – it simply doesn’t know how to operate seamlessly.

When we add needless amounts of additional artificial light exposure, we cut into the natural sleep cycle by allowing the retina to receive light and transmit brain messages for hormone suppression and production at any time of day. The body doesn’t know when to actually get ready for sleep. 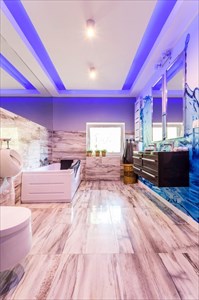 Fluorescent and LED lighting not only provides artificial light to cause disruption, but also blue light too. The purpose of LEDs and fluorescent bulbs is to provide more energy efficiency. These bulbs also provide better lighting than incandescent bulbs. Many appliances and technological devices and products make use of these bulbs too.

Products with these bulbs, such as TVs, tablets and smartphones, produce blue light wavelengths that effectively influence out attention spans, mood and reaction times. During the day, when we are at our most alert, this is more of a positive influence. At night, it breaks the cycle flow. The shorter wavelengths of blue light stimulate the suppression of melatonin. At night, we are far more sensitive to the effects of blue light.

A professor and circadian rhythms expert at the Texas A&M Health Science Center College of Medicine, David Earnest, says that the spectrum of wavelengths has a definite influence on the human circadian system.

"Blue light is the most sensitive side of the spectrum," he says.

Is sending off that last batch of emails at night really something we need to think twice about?

A growing number of researchers think so, yes. PhD, MD, chief of the Division of Sleep and Circadian Disorders at Brigham and Women’s Hospital in Boston, Charles Czeisler adds his name to the growing list too and believes that it should be of greater concern to the public.

“The more research we do, the more evidence we have that excess artificial light at night can have a profound, deleterious effect on many aspects of human health,” he says.

E-readers, mobile phones, tablets, laptops, TVs and various household appliances and eco-friendly street lamps… all emit shorter, brighter bluish wavelengths and light that is brighter. When it comes to overall health, Czeisler believes that it is just as important to better manage blue light exposure at night as it is to take the best care when it comes to our nutritional and exercise regimes. We’re compromising it all by influencing restorative sleeping habits in a negative way.

Studies and workshops looking into the effects have been countless. All have looked at the influences on problems with sleep, but have also found linked to issues with weight gain, cancer, heart disease and depression. Many claims continue to be made, showing growing concern for the risk of other chronic health conditions.

The majority of claims, however, have either been assessed based on animal studies or from larger populations, showing distinctive patterns. As yet, a direct cause and effect is still to be conclusively determined.

Does that mean we shouldn’t yet pay attention to the alarm bells? The number of health experts in agreement is still growing. Many appear adamant that even without a direct causal link, the result patterns show enough to take seriously and warrant steps to correct now.

Some organisations are taking steps. For instance, in October 2016, NASA implemented a change in lighting at the International Space Station (ISS) which automatically dimmed light at night, emitting longer-wavelength light instead.

Experts all agree, it’s not that complicated a solution either. Dim lights at night and tone down on blue light exposure. There’s little harm during the day. It’s night-time exposure that should be taken more seriously. Allowing the kids, one last game on the tablet before bed-time or quickly shooting off a batch of mails to finish out the day may seem harmless, but research findings are suggesting there may be long-term health effects.

The first indication that blue light may be affecting our health was short-term sleep disruption. This arose from a study that placed participants in a sleep laboratory, allowing access to read an e-reader at night for 5 days. Findings saw that melatonin levels decreased by 55%. Along with that, participants took longer to fall asleep and experienced poor REM (rapid eye movement) sleep. All felt somewhat groggy the following morning. This was compared to participants who read a newspaper or a book before bedtime, providing a strong hint that the light emitted from an e-reader has an effect on the quality of sleep.

Studies have also assessed teenagers who appear to be sensitive to light during the night. Participants were allowed an hour of exposure from mobile / tablet devices. Findings showed melatonin levels lowered by 23%. When usage time was increased to 2 hours, melatonin levels dropped further (38%).

When it was noted that blue light may influence our natural hunger cycles as well, investigations continued, looking for ways it may be fuelling metabolic diseases and weight gain. Why? Study participants who were exposed to bright light (blue light) at night appeared hungrier and produced less insulin. This means that ‘late-night snacks’ are more easily stored as fat in the body and can increase the likelihood of diabetes.

Obesity came under the spotlight too. In March 2016, a group of researchers from the University of Haifa, Israel, conducted a comparison of data with that of the WHO (World Health Organization). The comparison looked at obesity data and night-time military satellite images (showing lighting). The comparison found similarities between the most night-time illuminated areas and number of obese individuals.

Where children are concerned, studies have made use of animal testing. The Ohio State University found a measurable impact on the brain whereby inflammation increased and hormones needed for promoting new brain cell growth considerably decreased with bright light exposure just 3 feet away. Researchers noted a strong possibility for ‘depressive-like symptoms’ and concerns with memory function as a result.

What about children with existing medical conditions? Those with autism and Attention Deficit Hyperactivity Disorder (ADHD) should be taken into consideration too. Many with these conditions also experience gastrointestinal issues. Overexposure to blue light biologically inhibits the production of melatonin in the bodies of affected individuals and thus affects circadian rhythms, which in turn can make for difficult treatment programmes.

Many parents of children with these conditions utilise screen time as a reward. If a child accomplishes a task or chore successfully, they are then allowed set time using a device such as a tablet. Parents will need to better understand the relationship between blue light and melatonin, especially when coping with an autistic or ADHD affected child. The reward is likely overriding positive effects of treatment to better regulate the body and promote better overall health and functionality.

Studies have also looked at specific populations, including emergency care workers and oilfield workers. Both are chronically exposed to bright light at night. They too showed similar mood impairments and concentration issues to those exhibited in the tested animals.

Chairman of the department of neuroscience at Ohio State University and study author, Randy Nelson sums the findings up as follows, “This is not just a sleep problem. This is a problem of disruption of the entire circadian clock, and sleep is just one hand of that clock.”

Findings from studies have also noted a dramatic risk increase for breast cancer in women – between 50% and 70%. Why? Melatonin is a known anti-cancer agent. Lower levels in the blood stream for female night shift workers places them at higher risk of developing cancer during their lifetime.

With increased blue light exposure at night in the average city / suburban home, are we all effectively ‘becoming night shift workers?’

Experts do agree that although there has been a considerable amount of research, it is still in its infancy. It’s still enough to take note of, however, in order to try and prevent long-term damage.

PREVIOUS Is blue light negatively affecting our health?
NEXT Blue light - What should you do?
Back to top
Find this interesting? Share it!