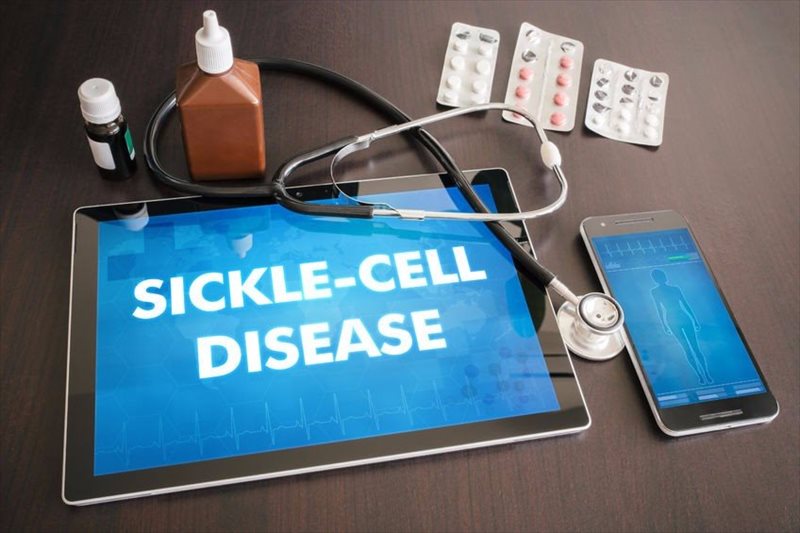 What is sickle cell disease?

An autosomal recessive condition, sickle cell disease (SCD), also known as sickle cell anaemia, is characterised by a group of inherited red blood cell (RBCs) disorders. A person with the condition typically has two copies of the autosome gene (non-sex chromosome). Essentially, the normal function of red blood cells in the body is compromised and they aren’t able to carry a sufficient amount of oxygen throughout the body.

Normally, the body’s red blood cells are round in shape (like little discs) which enables them to travel easily throughout the body. The shape gives them enough movement flexibility to be carried through even the smallest blood vessels in the body.

A person with SCD does not have many round shaped red blood cells. Their RBCs are crescent-shaped, like that of the crescent-shaped blade known as a sickle (almost crescent moon or banana-shaped). This shape is not as flexible for the cells to perform their normal functions and thus makes them ‘sticky’ and more susceptible to becoming ‘trapped’ or ‘stuck’ as they move, particularly in smaller blood vessels. This in turn means that blood and the oxygen they carry is restricted from reaching various parts of the body that require it for normal function. The lack of sufficient blood flow and oxygen then results in tissue damage (organs, bones and muscles) and pain.

A person with SCD is also more susceptible to anaemia, infections and even stroke. As an inherited disease, the condition is managed with a daily treatment plan to alleviate symptoms and prevent as many complications as possible. As yet, there is no cure for sickle cell disease. 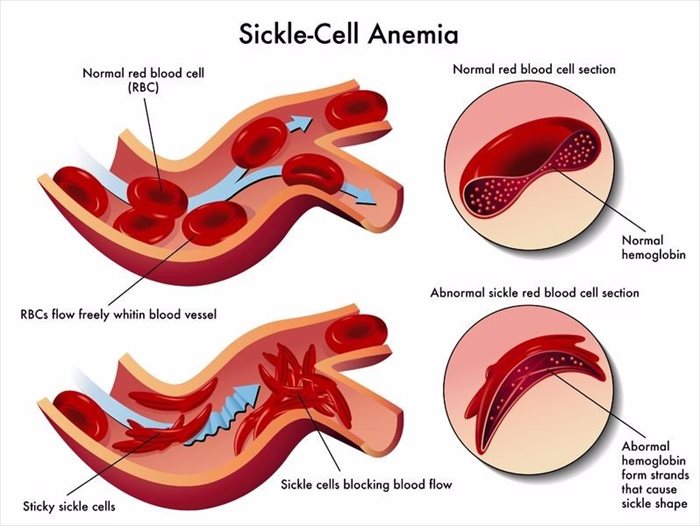 As an inherited blood disorder, sickle cell disease is passed from one generation to another (known as ‘autosomal recessive inheritance’). A mother and father must each pass on to their offspring a defective form of the gene (haemoglobin S gene) that normally produces healthy and red, iron-rich compounds (haemoglobin – the protein which carries oxygen in the blood) for SCD to occur.

It can happen that only one biological parent passes on this defective gene to their child. In this instance, a child may be diagnosed as having the sickle cell trait. This means that a child will have one defective form of the gene and one normal haemoglobin gene. This enables the body to produce a healthy supply of haemoglobin (with normal red blood cell function) as well as sickle cell haemoglobin (defective function causing damage to the body).

A person with the sickle cell trait may not have symptoms of pain as result of damage to the body, even though there is a presence of abnormally shaped RBCs. They will, however, be carriers of the disease, which means it is entirely possible to pass on the gene to their offspring.

Different mutations in these genes (4 polypeptide chains) result in the four main types of sickle cell disease. These are:

NEXT How does sickle cell disease affect the body?
Back to top
Find this interesting? Share it!

We all know that a person having a stroke is in a serious and life-threatening situation, but do we really know what to do in the event of an emergency? Here's all you need to know...

A heart attack can be a scary occurrence for you or someone you love. Take a look into the causes, treatment and symptoms for a heart attack so that you know what to do if it occurs...

Stress can affect everyone differently. It is your body's biological response to a certain situation. It is important to know how to deal with stress in order to develop effective coping mechanisms...

Did you know that there are over 400 variations of anaemia? We define the condition, it's causes, symptoms and treatment procedures here...

The biggest flags for jaundice are a yellowing of the skin and the whites of the eyes. It's underlying causes can be different for babies & adults.