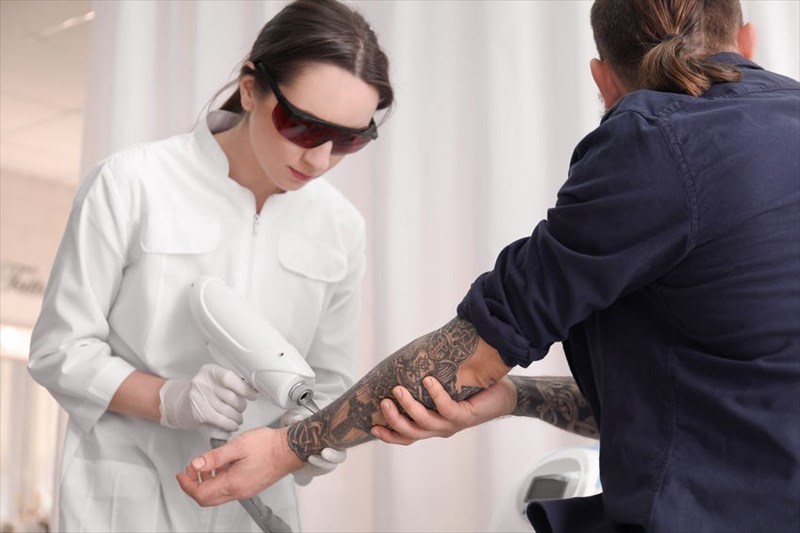 Unfortunately, not all decisions to get a tattoo are made with a clear head or done in the best of circumstances, in fact around 23% of people who have tattoos consider removing them at one point or another11. Having a tattoo removed is entirely possible but the process is both expensive and depending on the method used, may be painful.

There are a number of ways that tattoos can be removed. In the past, surgical removal, dermabrasion or the use of traditional ablative lasers were the only options of getting rid of permanent ink. Each method had its own drawbacks and various degrees of scarring were common end-products of the removal.

Today quality-switched (QS) lasers are the preferred tool when it comes to tattoo removal (with the exception of tattoos which have caused an allergic reaction as this may worsen after laser treatment) as the short pulse durations ensures effective treatment and tattoo removal with less scarring. The bursts of light emitted by these lasers heats and breaks apart the tattoo pigments in the skin, these then remain in the skin or are removed by the lymphatic system and end up in the lymph nodes12.

When determining if someone is a candidate for tattoo removal, a therapist will assess: 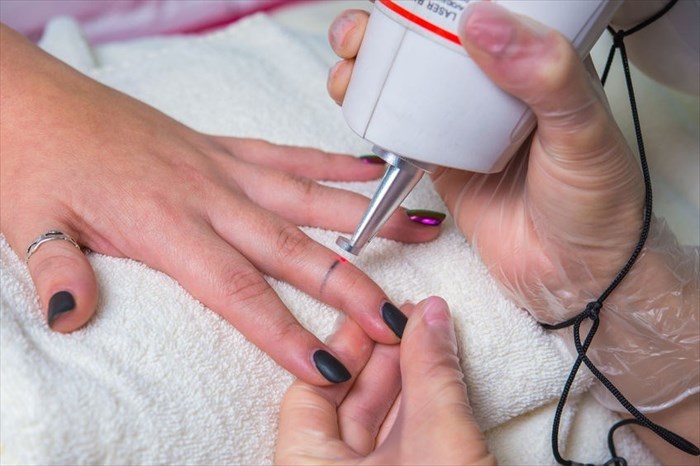 What to expect during a laser tattoo removal session

Prior to your session the doctor or therapist will have discussed your requirements, the need for anaesthetic cream or an injection and your medical history as well as the medications you are currently taking. One the day of the procedure you can expect hte following

Having a tattoo removed with a laser does involve a degree of pain, although most people seem to feel it hurts less than expected. The level of pain experienced is generally compared to that of having the tattoo done.

The actual sensation is likened to being repeatedly snapped with an elastic band or the feeling of cooking oil spattering onto the skin when frying food.

Can I take a pain reliever before a laser tattoo removal procedure?

If you plan to take a pain-reliever before your laser procedure, it is best to discuss this with your doctor or the technician first. It is generally advisable to only use non-aspirin products to minimise post-procedural bruising which aspirin and non-steroidal anti-inflammatories may cause.

Do they give you anaesthetic before laser tattoo removal?

You will often be asked if you would prefer some form of anaesthetic before having your tattoo removed. If so, a prescription anesthetic cream will generally be applied approximately two hours prior to laser therapy and will be wiped away just before tattoo removal begins. In some cases a local anesthetic may be injected at the tattoo site before the procedure commences.

What does your skin look and feel like after removing a laser therapy session to remove a tattoo?

Your skin may be inflamed and red and feel sunburned for a few days after a laser therapy session. A scab may form in the area. It is important to follow your doctor or therapist's instructions and not pick, scrub or otherwise irritate the area in question. Bathing and showering is acceptable the day after treatement but otherwise the area should be kept clean and dry. Apply the antibacterial ointment prescribed as directed.

How long does a laser tattoo removal session last and how many will I need?

Laser therapy sessions usually only last a few minutes but the larger the surface area of the tattoo, the longer removal will take.  Multiple sessions (often 10 ore more) are usually required to achieve removal.

Generally it is recommended that laser therapy takes place at three-week intervals to allow the ink residue to be absorbed by the body.

Not all tattoos can be removed from the skin entirely through laser therapy, especially with the more difficult colour (yellow, orange, and to a lesser extent purple and green). This means that residual pigment and marks may be visible on the skin once the removal is complete in some individuals. Results vary depending on the original colours, the practitioner used and the number of sessions.

How much does laser tattoo removal cost?

Depending on your location, and the size of your ink, laser removal procedures can be costly. In the US, tattoo removal can run at anywhere between $100 and $500 per session and in the UK prices range from £150 to £800 a time. Multiply this by 10 or more and you're looking at quite a heft sum.

Can you tattoo over a lasered area?

If you're removing a tattoo but feel like you'd like to have another in its place, you'll have to wait until the lasered area has fully healed, but it is possible to have another tattoo in the same area that you lasered another one off of.

11. Statista. 2017. Where Are People Regretting Their Tattoos The Most: https://www.statista.com/chart/12025/where-are-people-regretting-their-tattoos-the-most/ [Accessed 25 September 2018]

12. US National Library of Medicine. 2015. Complications of Tattoos and Tattoo Removal: Stop and Think Before you ink: https://www.ncbi.nlm.nih.gov/pmc/articles/PMC4411590/ [Accessed 25 September 2018]

PREVIOUS Signs and symptoms of tattoo infection (and what to do about it)
Back to top
Find this interesting? Share it!