How do genes determine eye colour? 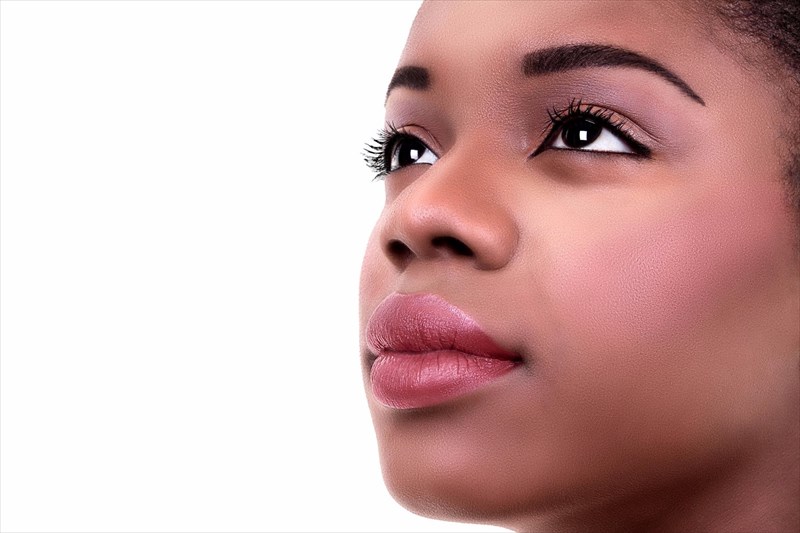 How do genes determine eye colour?

So, what are the genetic traits that determine eye colour and just how complex a process is it?

It’s all in the genes 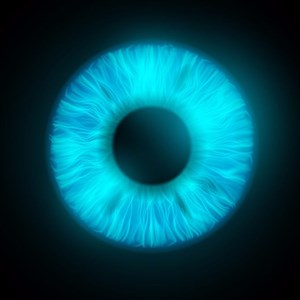 A child is formed through a complex mix of genetic material (chromosomes) from either conceiving parent. This then mixes and matches in different ways to produce a unique little human being.

Pigmentation in the iris, the coloured circle that surrounds the pupil, is what determines the colour of the eye. This pigment effectively originates from at least three different genes, which then determine the most dominant colours – blue, brown and green. The precise nature of how these genes determine colour is still being researched. Not all genetic material is yet fully understood in relation to the formation of pigment.

Iris-holding pigment also helps to control just how much light will be allowed to enter the eye (how light is scattered throughout once passed through). Melanin works in conjunction with white collagen fibres, which help to produce varying shades of green, hazel and grey. In the case of a relatively melanin-free iris (light coloured eyes), the collagen fibres scatter any blue light coming through to the surface, thus creating a blue looking iris (blue eyes).

Iris colour patterns exist in gradient shades of blue to dark brown, and every colour in between. Thus, pigment ranges from a very light blue colour, to darker shades of blue, green and hazel to an intensely dark brown / black.

Being the dominant colour, brown is the more common eye colour across the world. Blue and green eyes are predominantly found amongst those with a European ancestry.

Researchers from all over the world are working on finding accurate ways to predict eye colour, including variable eye colours, through developing sophisticated DNA analysis. Dutch researchers have been working to achieve at least 90% accuracy using these analysis processes. Through analysis, researchers hope to gain an accurate understanding as to just how genetics directly determine a person’s eye colour.

Once this research accomplishes its goals, eye colour prediction may have other uses other than just for interest’s sake, such as in forensic investigations. If DNA recovered from a crime scene can be analysed to the point of being able to accurately determine details of a suspect’s appearance, these clues can have a positive impact for resolving wrongdoing in society.

How are genes thought to determine eye colour? 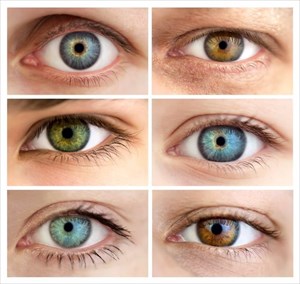 It all starts with a collection of chromosomes. The genetic material that ‘carries the code’ for human form, and effectively develops and maintains the body (throughout a person’s lifetime), is contained in what is known as chromosomes. All inherited traits come from these genes which form every cell of the human body. Within each cell is a nucleus where genetic material is stored from the time of conception to the end of a human life. Genes are thus exclusively responsible for how the human body looks and functions.

Genes effectively function as instructions for the production of proteins. Genes are structured in two primary parts – to carry the code for instructions to produce a protein, and carry non-coding instructions which prompt where and when a protein is needed to be made, as well as how much is required.

Once an egg and sperm become fertilised, forming an embryo, 23 pairs (or copies) of chromosomes (46 in total) begin the process of creating a human being. One half of the chromosome pairs comes from a woman’s egg cell (ovum) and the other from those of a man’s sperm. The correct number effectively creates the most ideal form. Any abnormal division can result in genetic defects.

The production, transport and storage of the pigment, melanin (two black and yellow pigments) is dependent on various factors concerning individual genetic material. The amount and quality of this pigment in the 2 outer layers of the iris has a direct involvement in the development of eye colour.

This means that a higher amount of melanin in these layers in the iris (more black and yellow pigments) contributes to darker colour eyes. Less melanin results in lighter colour eyes.

The OCA2 gene was formerly known as the P gene (or P protein). This gene is responsible for the production of P protein, which is responsible for the production of melanin through a maturation process of melanosomes. Melanin not only is linked to eye colour, but has a direct role in the shade of skin and hair too. Polymorphisms in this gene (i.e. genetic variations) can result in a lower amount of P protein that is functional, which results in less melanin in the outer layers of the iris. Thus brown-eyed people have a higher amount of polymorphism in their genes, producing higher quantities of melanin in the iris. The OCA2 gene is thus a key factor in what determines the colour of a person’s eyes, and the shade.

An impairment that occurs with this gene can also lead to the kind of results seen with certain types of albinism. When pigmentation of the iris is severely low, ocular albinism can occur, resulting in very light-coloured eyes with accompanying vision problems. Eyes that are very light in colour and are accompanied by fair skin and light-coloured hair (including white) can also occur, and is known as oculocutaneous albinism.

The HERC2 gene is also known as intron 86. This contains a DNA segment which influences expression (or controls activity) of the OCA2 gene. This ‘control’ function effectively turns the expression of the OCA2 ‘on and off’ as needed.

Lighter coloured eyes may have more to do with the non-coding region of the HERC2 gene. The theory is that a change in colour must be where the protein is made (i.e. not a change in the protein itself). It was previously thought that that non-coding region of the OCA2 gene was responsible, but subsequent research has pointed to the HERC2 gene instead.

Research has determined that at least one polymorphism contained in the HERC2 gene can reduce OCS2 expression, which in turn lowers melanin production, thus resulting in lighter colour eyes. Effectively a ‘non-working’ OCA2 gene is one of the determining factors for lighter coloured eyes (and not just blue shades).

The HERC2 non-coding region effectively functions like a switch. What research has been able to pinpoint relates to what is known as transcription factors (TFs). These are special proteins which are, theoretically, capable of recognising portions of DNA in order to bind them. When turned on in nearby genes (such as the HERC2 gene), a TF results in binding where it hadn’t occurred before, resulting in the switching off of the OCA2 gene.

Most human cells contain the same DNA but not all function alike, and we can see this in the way the body works. A skin cell does not function in the same way those in the brain are required to. All of the body’s different cells have different transcription factors which are switched on and off.

A non-coding HERC2 gene region that contains a blue-eyed version is switched off and results in blue colour eyes. Non-coding portions containing brown eyed versions result in enough P protein to produce darker eyes. If a child receives a brown version of the OCA2 gene (i.e. where the OCA2 gene is turned on) from one parent and a blue version (i.e. where the OCA2 gene is turned off) from the other, the more dominant of the two is likely to result in brown-eyes (overriding the lighter colour because it produces more pigment).

This effectively explains how genes influence blue or darker eye colours. Research has not yet been able to pinpoint the genes directly responsible for green eyes. This is possibly because there may be more than one gene involved, not just versions of the OAC2 and HERC2 genes.

Different colour eyes are not based on a set of ‘different colour based genes’. Difference in colour is based on distinct versions of the same protein / gene. Every person has a different version of the OCA2 gene. The variations of the P-protein produced by the gene influences whether a person has less of it, very little at all, a weak form of it, or more.

A single eye colour is obtained in multiple ways (polygenic traits / multiple genes). How different genes and their unique versions work together has a multi-layered effect on how a final eye colour is produced. Every layer has a function, much like a factory full of workers doing their bit to produce a final product. The same applies to the body. 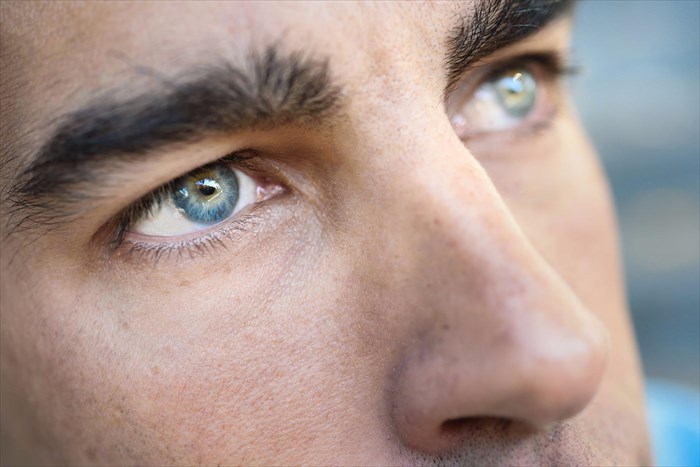 You may have heard the theory that all blue-eyed people in the world today are descendants of one ancestor who existed some 6 000 years ago.

Scientists are certainly curious about this and are researching genetic material to gain a better understanding. The theory, has focussed on trying to establish just where blue eyes actually come from in the world. Even when samples of participants were looked at from different parts of the world (initially just Europe), the same DNA difference in HERC2 genes were noted. Many of the participants, however, were not related. Researchers are looking into potentially more than one version of the OCA2 gene which could be a reason so many unrelated individuals develop blue eyes – such as in the case of red hair (there are at least 4 versions of the MC1R gene that causes red hair).

Some scientists have theorised that a blue-eyed mutation could have originated from the Black Sea region, with a population having migrated to Europe at least 6 000 to 10 000 years ago. Theories also include potential influences regarding vitamin D (specifically from sources such as sunlight) and lighter pigment skin. Perhaps ancestors also favoured certain aesthetic traits which also resulted in a growing number of blue-eyed people being reproduced (blue-eyed parents are more likely to produced blue-eyed children). One blue-eyed ancestor is theoretically (mathematically) possible, but is yet to actually be determined.

Theories also speculate that perhaps the human race all started with brown-eyed individuals, and due to genetic mutations, other colours developed through the ages. Perhaps this is why brown eyes are more common around the world?

Researchers have determined a variety of other genes linked to determining eye colour. Those that play a smaller role include:

All of the above are believed to combine with the functions of OCA2 and HERC2 in order to produce an eye colour that is lifelasting. As many as 16 different genes, however, may have some influence on how colour is formed. (1)

What does it mean when genes are described as dominant or recessive?

One of the pair is dominant in nature (expressive) and the other recessive (non-expressive). Dominant features are typically the traits which appear, such as dark eyes. So why then is red hair considered recessive, and appears in certain people? If a pair of alleles are only recessive and one is not a dominant one, this can happen. This means that an unexpressed trait can appear.

The most common eye shades are brown and blue. It is already established that darker eye colour shades are more dominant over all colours. Green alleles are however, more dominant over those that are blue. Research believes that a blue-eyed person must have inherited blue alleles from both parents.

PREVIOUS What determines your eye colour?
NEXT When eye colour changes…
Back to top
Find this interesting? Share it!