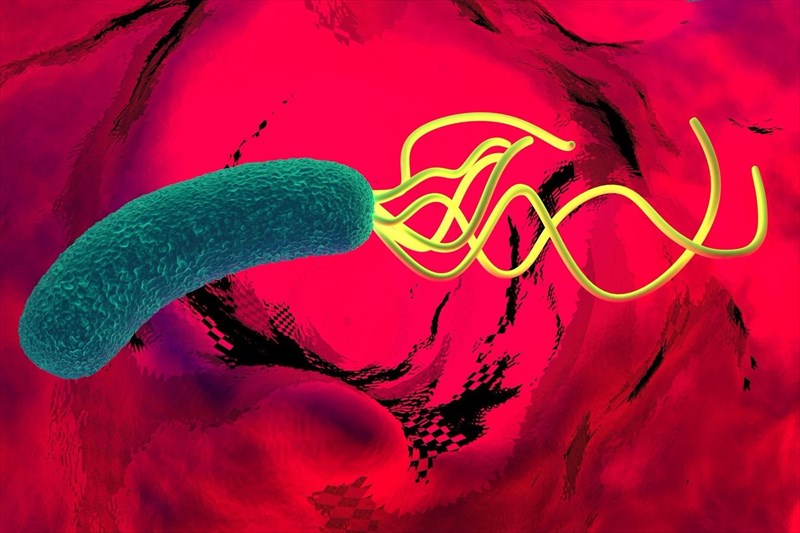 What is H. pylori?

Helicobacter pylori (H. pylori) is a type of spiral-shaped genetically heterogeneous bacterium (’Helico’ originating from Latin, meaning spiral) that most often causes an infection within the stomach. The bacteria (genetically diverse in content or character) typically grows in the digestive tract, once entering the body, and can cause digestive and gastrointestinal illnesses.

Did you know? H. pylori is considered the first formally recognised bacterial carcinogen and has ‘colonised’ more than half of the world’s population (once infected, the bacterium can live in the body for life). (1)

For more than a century, medical professionals have been aware of the fact that bacteria thrive in the human stomach. For the most part, it was believed that bacteria came directly from the ingestion of contaminated foodstuffs.

But in 1982, Drs Barry Marshall and Robin Warren (from Perth, Australia) discovered this spiral bacterial species, later named H. pylori, and more specifically that it could thrive in an acidic environment (the human stomach) – a true gastric coloniser (something that was not previously thought possible).

The discovery was an important one, as it had a major clinical impact on the treatment procedures of associated gastrointestinal diseases linked with the bacterium. The doctors were thus both awarded a Nobel Prize in Physiology or Medicine in 2005 for the “discovery of the bacterium Helicobacter  pylori and its role in gastritis and peptic ulcer disease”.

For most, a H. pylori infection is fairly common, presenting no noticeable symptoms (i.e. an infection can be present but not result in illness) and is more often than not, harmless. More noticeable symptoms may be as a result of an illness that has developed, such as a peptic ulcer (a sore which slowly develops in the lining of the stomach, upper portion of the small intestine / duodenum and sometimes, the oesophagus), or gastritis (inflammation of the stomach). In rare instances, this bacterium has also been linked with contributing to the development of stomach cancer. Studies have indicated that nearly all peptic ulcers diagnosed and treated are as a result of a H. pylori infection (with only a few resulting from long-term use of NSAID / non-steroidal anti-inflammatory medications).

H. pylori strains are known to adapt to harsh and acidic environments (like the stomach – their host), and are capable of reducing acidity in order to thrive. The shape of the bacterium also makes for easier penetration to the lining of the stomach, where it can be better protected in mucous (which normally protects the stomach from acid), away from active immune cells (which will be triggered when signs of infection are present and work to combat the unwelcome substance). In this way, H. pylori interferes with the body’s natural immune response to protect itself and ‘attacks’ the lining of the stomach (disrupting normal digestion processes), and in so doing gives itself opportunity to live (often referred to as ‘colonising’ the stomach / ‘populating’ the organ). Acid can then penetrate the lining of the stomach. The result is stomach-related ailments and discomforts – food which does not digest properly and cannot move through the digestive tract, infections or bleeding.

H. pylori is contagious and can be passed from person-to-person, commonly via contact with saliva, faecal contamination or contact and poor hygiene practices. With more of the world’s societies developing better sanitation practices and access to clean water, it is believed that fewer populations are becoming infected with this bacterium. Infections with the bacterium, however are widespread, particularly in the developing world.

Children are seemingly most susceptible to getting an infection, but presenting no symptoms. Some only become aware of an infection later in life when symptoms present themselves and a digestive related illness with signs of inflammation occurs.

H. pylori is easily diagnosed and can be successfully treated with a short course of antibiotic medications. However, much about evolving strains of the bacterium and the influences on antibiotic resistance still needs more research. For this reason, a vaccine has yet to be successfully developed.

NEXT What causes a H. pylori infection?
Back to top
Find this interesting? Share it!

Peptic ulcers are a commonly seen ailment in a number of people and can result from a number of factors. Find out about the symptoms, treatment and diet here.

What your poop says about your health

What does the colour and shape of your poop say about your health? Here's what to look out for...

When inflammation, irritation, or erosion of the protective lining of the stomach occurs, gastritis develops. Find out how to recognise the symptoms.