What did the process of foot binding entail?

What did the process of foot binding entail?

The process of foot binding was one that took years and involved a significant amount of excruciating pain that resulted in a permanent deformity of the feet in order for them to appear smaller. The result of foot binding was shorter and narrower feet due to the forcing of the heel and the big toe to move closer together than nature intended.

Chinese girls would typically have their feet broken and bound from the age of five, some sources suggest that foot binding began when the girls were as young as three years old4. The reason for starting the process at such a young age was due to the fact that children’s feet are made of cartilage that is still in its developmental stages, therefore, it can be broken more easily and moulded into the desired shape which was referred to as the “Golden Lotus”, something that could only be achieved through foot binding.

The process would begin with either the mother of the girl or another older women from her family, such as her grandmother, clipping the toenails of the girl’s feet and then soaking the feet in either hot water or a special concoction of ingredients that ranged from various nuts to herbs. This was done in order for the tissues and bones of the feet to soften in order to easily facilitate manipulation. After soaking, the feet were then massaged and doused in alum – a chemical substance that is used in the dyeing of cloth and also causes the skin to tighten. The process would begin during the months of winter so as to allow for the cold to numb some of the pain experienced.

All of the girl’s toes on her feet, except for her big toes, were then broken and folded under the foot (i.e. the sole). The toes were bound in this position with a cotton or silk bandage, keeping the feet shorter than ten centimetres (roughly four inches).

Every two days the wrappings were removed to be washed and the toenails manicured as meticulously as possible so as to avoid potential infection. The foot’s arch would also be broken, and the foot pulled straight using the leg. Over time, the size of the shoes the girl had to wear would be reduced in order for her shrinking feet to be accommodated. In order for the intended conformation of the feet to be achieved, the girl would have to walk far distances in order for her weight to crush her feet.

The flesh of her feet would be lacerated, or the woman performing the foot binding would insert sharp objects into the bandages in order to promote the rotting of ‘excess flesh’ to achieve tinier feet.

As a girl aged, she would have to perform these acts herself. After two years, a small pair of folded feet would be achieved. In order to ensure that the toes did not return to their natural position, foot binding would continue for a further ten years. In total, a young girl would endure twelve years or more of excruciating pain through this extreme body modification technique.

Although there are a number of theories and schools of thought as to why this practice came about, there are also a variety of ideas that explore just why such a painful practice only grew in popularity. In order for a culture and the traditions that fall within it to survive, it has to have the backing of a system that provides support and legitimacy to its beliefs. The tradition of binding one’s feet was backed by the belief system of the Neo-Confucian Doctrine, which was the dominant way of thinking in China during this time.

The teachings of this ethical and social philosophy noted that the ideal woman is faithful to her husband and family and does not easily complain about pain and suffering. Therefore, foot binding quickly became the ideal practice to exhibit one’s obedience and adherence to the teachings of this doctrine. If a woman showed perseverance despite the pain that accompanied foot binding, this was considered a sign of good character and something that all women should encompass. Daughters who did not adhere to foot binding practices were regarded as disobedient and unappreciative of the families who raised them.

Apart from these ideologies which ruled in China during this time, encouraging and enforcing foot binding as a norm, there was more to having smaller feet than simply obeying cultural expectations…

There are various theories as to why smaller feet were seen as more attractive. Within all of the legends that portray how foot binding may have originated, is the common thread that small feet were regarded as a rarity, one that incorporated an air of sexual elegance, grace and beauty, becoming a beauty trend. Experts believe that Chinese society was male-dominated at this time and thus the practice of foot binding was legitimised as an expressional means of elegance and purity in order to please men.

As soon as it was deemed socially acceptable to bind one’s feet as a symbol of beauty and obedience, women across China quickly took up the practice.

Following on from the perceived beauty that lies within smaller feet, sexuality then became associated with foot binding. Some historians and scholars believe that the fetish that surrounded bound feet involved the fact that when seen out of their wrappings, some thought the feet resembled the most sacred and secret of things, and that was the female genitalia3. In addition to this, a foot in its bindings or wrapping is thought to have resembled the male penis. Thus, the sex appeal that surrounded foot binding is one of the most well-known ideals behind the practice. 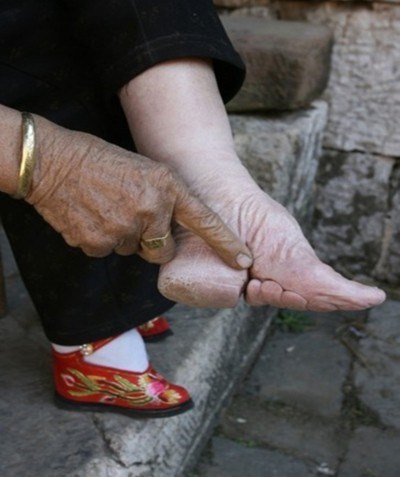 Following from the symbols of beauty and sex appeal that were linked to foot binding, the practice then progressed into being used as a tool for marriage. Men began to prefer women who had bound feet, thus women across China began binding their feet so as to attract a suitor and please their future husband3.  A number of marriages were arranged during this time, as a result, daughters who had bound feet were not only attempting to attract a suitable husband, but more importantly his family and potentially, their shared wealth and status. Foot binding was thus thought to enhance a women’s prospects in marriage.

Scholars have suggested that, although foot binding is heavily associated with beauty and sex appeal, the practice also signalled morality and modesty. This led to parents bind their daughters’ feet from a young age so as to enhance her prospects of marriage to a respected family.

As foot binding progressed, the practice started to become something that symbolised status and wealth. When foot binding initially began, it was thought to only be performed by women who belonged to the higher classes of society, as these women had the time to bind their feet and could afford to not work. Women who were considered poor and lower class had to be on their feet to provide for their families through gruelling physical labour. This resulted in men who belonged to the higher classes of society only choosing to marry women of comparable status whose families could afford to support them.

The lower classes quickly realised this and chose to bind their daughters’ feet so as to attract wealthy suitors. The implementation of this practice was deemed as a significant sacrifice for the families from the lower class as each daughter who had her feet bound, meant less income for the family as she would be unable to perform physical labour that required lengthy periods of standing and walking to earn her keep.

Some scholars have written accounts of girls from lower class families begging their mothers to bind their feet after seeing other girls with extremely small feet in beautiful shoes and wanting to wear shoes and look just like them3.

China was a country that was dominated by men during this time and the customs of foot binding was a reflection of this. Women were subjected to excruciating pain in an attempt to showcase their obedience in order to please their families and husbands.

Some theories suggest that foot binding made it more difficult for women to run away from their husbands and due to their difficulty in balancing on such small feet and the pain that resulted from foot binding, they were more likely to stay home and remain loyal to their husbands.

Walking more than a few miles was difficult for most women with bound feet, this meant that women would never wander outside of their villages, thus making them more conservative as a result of limited exposure to the outside world. As a result of their diminished mobility, they were also less likely to have affairs or run from the beatings or unfair treatment of their husbands. In these ways, foot binding was regarded as a form of control which men used to keep women loyal and submissive. 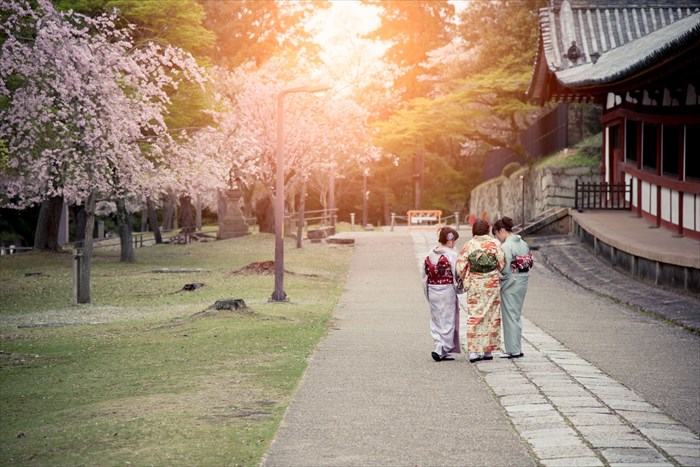 Foot binding was also linked to another vital role assigned to Chinese women, the production of Lotus shoes (the name given to the tiny shoes made for women with bound feet). Shoes became a prominent feature and means of expression among women in the Chinese culture. Lotus shoes were not regarded as an inanimate object during this time and were viewed as the material extensions of a woman’s body and her outlet of personal communication as a product of her own hard work.

It became social custom for female relatives and even distant friends to make shoes as gifts for the young girls who were undergoing foot binding. The admiration and respect for these girls was reflected in elaborately embroidered shoes with decorative patterns. These patterns not only adorned the sides of the shoes, but also the soles.

The styles and colours that were used reflected a sense of pride that women had in their shoes. Some shoes reflected certain regional styles, with many bearing the Buddhist symbols for wisdom and longevity, or animal symbols like that of a bat which symbolised happiness.

Shoes were worn for special events and occasions which included weddings and even in times of mourning. Extremely small votive shoes would be placed on the household altar which showcased the skills of the woman who had made them.

Therefore, the attractiveness and importance associated with small shoes themselves played a significant role in a girl’s willingness to undergo foot binding, as beautiful shoes allowed girls and women with small, bound feet to be displayed.

A woman would often be judged by her Lotus shoes, particularly by potential in-laws and matchmakers. In abiding by the teachings of Confucius, women had to bring honour to their families and their bound feet and extravagantly beautiful shoes aided in doing this. 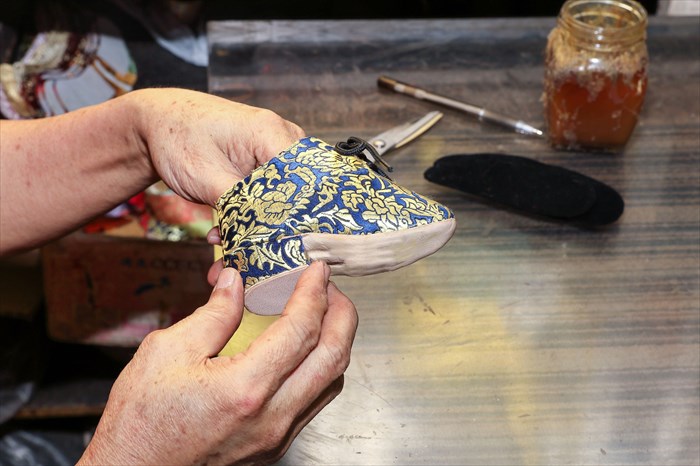 PREVIOUS The history behind foot binding in China
NEXT What are some of the health complications of foot binding?
Back to top
Find this interesting? Share it!