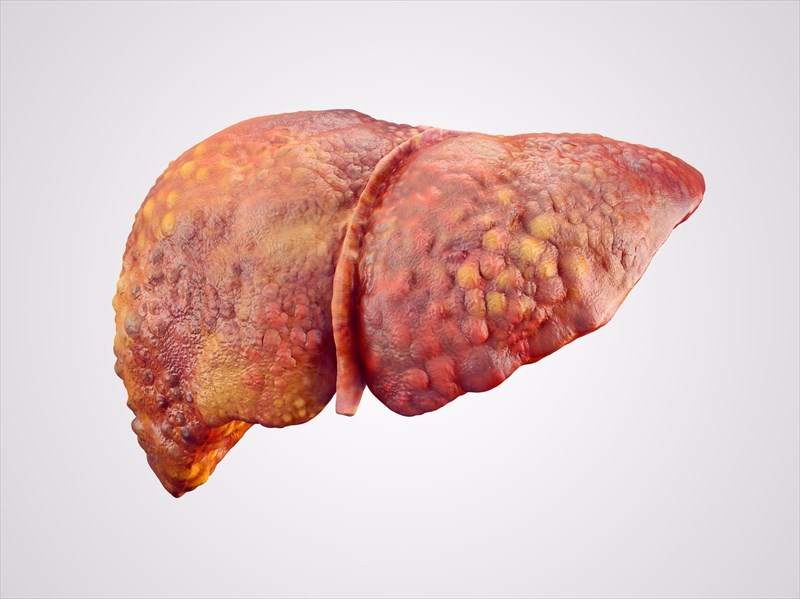 What is cirrhosis of the liver?

The late stages of liver fibrosis (severe scarring due to the accumulation of an abnormally large amount of scar tissue on the liver) or chronic liver disease is known as cirrhosis. At this stage, extensive damage results in poor function of the liver due to long-term exposure to toxic causes, such as excessive alcohol consumption (which is chronic) or infections (specifically hepatitis B and C). Damage to the liver prevents it from performing its normal functions, one of these is  to effectively detoxify the body of harmful substances, allowing vital nutrients to circulate and cleaning out the blood.

Scarring occurs as a result of injury and damage inflicted on the organ. Injury may occur as a ‘single event’ (new or short-term acute cause) such as the contraction of an infection (like hepatitis) or chronically (i.e. repetitive damage over the course of months or years), such as chronic infections or daily alcoholism.

With each injury occurrence (including infection and disease), the liver responds by trying to repair itself, resulting in the build-up of strands of scar tissue. Cells in the liver respond to damage by becoming inflamed, some dying off and forming scarred tissue. Those cells that do not ‘die off’ multiply as a way of attempting to regenerate the organ, forming regenerative nodules (clusters of newly-formed liver cells). The liver hardens and becomes lumpy as nodules of cells develop and accumulate. Inflammation in the liver causes the organ to swell, which can later shrink and increasing damage hinders the organ’s required function.

The repetitive cycle of damage, which can take many years to develop, ultimately makes it increasingly difficult for the liver to function as it should, and thus has negative effects on the remainder of the body. It becomes increasingly difficult for blood to travel through the portal vein (a large vein which normally allows blood flow into the liver), and blood can then accumulate or leak into the spleen with the building pressure. The more damage occurs, the higher the risk of developing complications, known as decompensated cirrhosis, which can be life-threatening.

Once damaged, scarring of the liver cannot be reversed. The more the liver is unable to function normally, the higher the risk of total liver failure (the final stage of liver disease). An early diagnosis is the best possible scenario whereby the underlying cause of cirrhosis may be effectively treated, preventing further damage.

As yet, there is no effective cure for cirrhosis, but there has been some recorded success with liver transplants.  Treatment options should be focused on alleviating symptoms of an underlying cause and thereby slowing down the scarring cycle, preventing further irreversible damage. 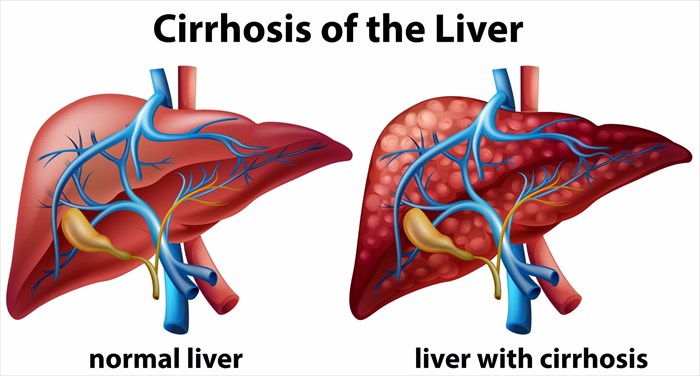 Cirrhosis and the liver

The largest organ in the body, the liver is one of the most crucial. Located on the upper right side of the body (abdomen), just beneath the diaphragm and lower rib cage, the liver is responsible for producing substances that fend off infections when they occur, assisting with blood clotting, filtering toxins or other infectious agents, such as bacteria, from the blood (thus purifying the blood), as well as assisting with storing energy (sugar and vitamins) and the digestion of nutrients consumed (through the production of bile which assists with the absorption of fats, vitamins A, D, E and K, and cholesterol). 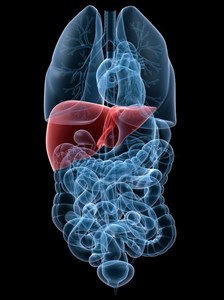 Some of the main functions of the liver include:

In order to maintain these essential processes in the body, liver cells are required to function normally and the organ must be able to function seamlessly with the body’s blood flow. All substances in the body which are added or removed by the liver are also transferred to and from the organ in the bloodstream. A hiccup in this system can result in the deterioration of critical functions. When inflamed or enlarged, the liver increases in size across the upper abdomen and also towards the navel area (umbilicus).

What happens when it all begins to go wrong?

A rich supply of blood is needed by the liver and is obtained via two fundamental sources, the hepatic portal vein which transports deoxygenated blood and nutrients, and the hepatic artery which carries oxygenated blood. This effectively divides the liver into two lobes (sections).

NEXT What are the main causes of liver cirrhosis?
Back to top
Find this interesting? Share it!

The liver is a phenomenal organ with the ability to heal itself. However, in some cases, the constant damage and abuse to it can cause liver disease and even liver failure.

Commonly referred to as piles, haemorrhoids (also spelled hemorrhoids) is an uncomfortable, often painful swelling of veins in the anus and lower rectum. Learn more here ...

What is an ultrasound scan and how does it work? We look at the numerous ways this screening and monitoring tool is used in medicine today. Here's everything you need to know...

The biggest flags for jaundice are a yellowing of the skin and the whites of the eyes. Learn more here...

What is hepatitis? How does it affect the body? We look into everything you need to know about the effects of inflammation on the liver...