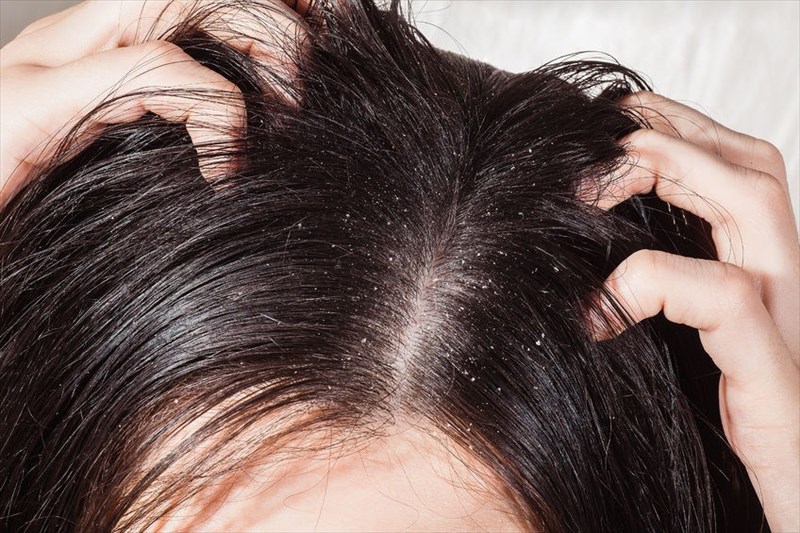 A fairly common problem affecting the scalp, dandruff is estimated to affect almost half of the world’s population at some stage in their lives, most often post-puberty. (1) For something so common, it is surprising that so little is understood about the condition, especially in terms of its causes.

Research has led to several associations and hypotheses – many of which are still undergoing extensive analysis. These findings have also led to much debate as to whether or not dandruff should be classified as a disease on its own…

To many experts, dandruff is merely an exaggeration of a natural physiological process that is inherent in all of us (i.e. the shedding of dead skin cells on the scalp and accelerated skin cell growth). Others argue that dandruff is a non-inflammatory form of a disease known as seborrheic dermatitis and, as such, should also be classified as a disease.

The definition of a disease, when broadly applied to humans, may be considered as any condition that causes discomfort, distress, social issues, dysfunction and death in the sufferer or those they come into contact with. (2)

While dandruff certain does cause a degree of discomfort, distress and embarrassment to the sufferer, one thing that physicians are certainly in agreement about is that dandruff is not a contagious condition and cannot lead to any serious health complications. 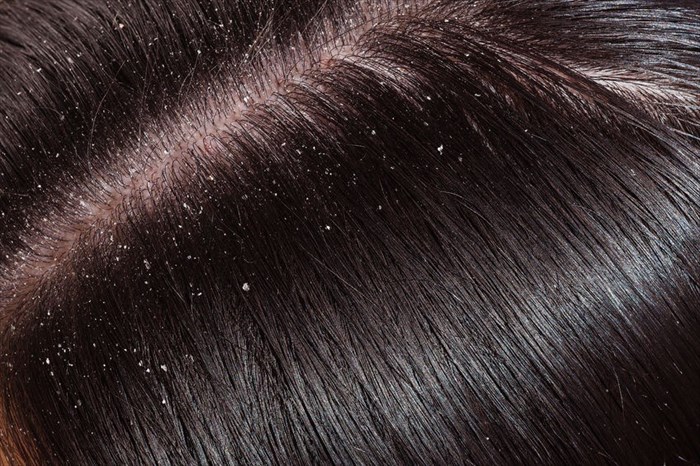 Dandruff flakes (as a result of an over-production of dead skin cells) are typically present on the scalp and are loosely distributed in the hair.

For the most part, dandruff is considered a non-inflammatory and non-contagious condition which only affects the scalp. It is often regarded as a mild form of seborrheic dermatitis (SD) – also spelled seborrhoeic dermatitis. (3)

Mild dandruff which is usually localised to the scalp, is considered non-inflammatory because any inflammatory indicators present are often classified as subclinical – meaning that they are not severe enough to be classified as observable symptoms.

Seborrheic dermatitis, a more severe form of dandruff that is also referred to as ‘cradle cap’ when it occurs in infants, is classified as inflammatory in nature, but tends to display physical characteristics affecting other areas of the body along with the scalp. Affected areas often include the face or trunk (upper chest or torso and back). SD involves hyperactivity of the sebaceous glands in the body, often making the skin’s surface oily – similar to that of dandruff affecting the scalp.

As such, dandruff and SD are closely linked due to their aesthetic manifestation which presents as a flaky and pruritic scalp (itchiness and skin / scalp irritation).

Mild to moderate dandruff is also known as:

Mild dandruff occurrences may worsen during periods of stress in a person’s life, during the winter months and with infrequent shampooing of the hair.

Other more severe conditions with similar characteristics to dandruff include:

If scales as a result of either of these more severe conditions extend to the areas of the scalp located behind the ears (this is referred to as the postauricular skin), oozing and crusting fissures (small cuts or tears in the skin) can develop. Infection of the ear’s outer canal (otitis externa) and concha (the external cavity near the entrance of the auditory canal in the auricle) can also occur, becoming very itchy.

The shedding of skin cells

The natural shedding cycles of dead skin cells and the renewal process in order to replace the skin cells that are lost, is a normal physiological process. The average life cycle of skin renewal / shedding cycle is around 28-days. (4) The most basic reason why dandruff occurs during this process relates to the excessive shedding of the cells on the scalp.

Essentially, the skin replenishes itself, virtually on a monthly basis. In the initial stages of this cycle, the body produces new skin cells (which are miniscule – invisible to the naked eye) over a period of days, which are then pushed through the layers of skin until they reach the outermost epidermal layer. Once these cells reach this layer, they come into contact with air and begin to ‘die’. Older, dead skin cells are shed from the body and replaced by the newer cells. The normal shedding process is not noticeable to the average human being (i.e. the cells are so miniscule, that shedding is not a noticeable function).

When excess skin cells are produced (sometimes at a quicker rate than is normal), dandruff can occur (i.e. additional deposits of skin cells / the turnover of skin cells are too excessive for the normal shedding process and surplus accumulation occurs), which then makes the shedding process more noticeable. This ultimately results in the characteristic signs of dandruff – dry or oily clumps / flakes (clusters of corneocytes / squames – ‘thin flakes’ or scales) on the scalp, sometimes accompanied by skin irritation and itchiness. Essentially, dandruff is a condition that displays visible signs of a natural physiological process that has become exaggerated.

Being an exaggeration of a natural process, the idea that dandruff only occurs in individuals who do not wash their hair is a misconception. While the condition can be exacerbated by a lack of washing, dandruff is not directly caused by poor hygiene practices and dirty hair.

This abnormality in the natural process of shedding also means that the formation of flakes on the scalp cannot be passed on to another, making it a non-contagious condition of the scalp.

An exaggeration of this natural process can occur in a mild capacity or more severely but is generally not considered a serious medical condition. Unless dandruff is completely unmanageable, severe or may be associated with another medical condition that does necessitate medical attention, a person generally does not require a medical diagnosis.

Dandruff is just one of the many physical conditions that result in a flaky scalp. Other than seborrheic dermatitis, common conditions include:

Dandruff and the involvement of sebaceous gland activity 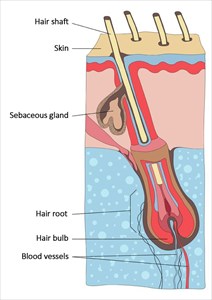 The human body consists of multiple sebaceous glands, distributed just about everywhere except the palms of the hands and soles of the feet. The scalp, along with the facial area and chest, experience the highest secretion levels of sebum, which is largely regulated by the sex hormones (androgens). The scalp is highly androgen sensitive and rich in sebaceous glands.

The sebaceous glands are activated (stimulated) in the womb and regulated by foetus’ own hormones as well as the androgenic hormones of the mother. During the first few months of a baby’s life, sebum production is similar to that of an adult due to the presence of the vernix caseosa, a waxy layer with a protective function.

The sebaceous glands are stimulated again during puberty. Circulating androgens result in elevations of sebum secretion, which begin to stabilise during a person’s 20s. Thereafter these levels begin to gradually reduce. Secretion rate appears to be higher among males between the ages of 30 and 60 years than in females, declining thereafter. Women going through menopause tend to experience a rapid decline in these levels too. (6)

Periods of active sebum secretion thus seems to correlate with age groups who typically experience dandruff more frequently, namely infants (who suffer from cradle cap), teenagers and middle-aged adults. That said, the role of sebaceous gland activity is generally not thought to be a direct cause of the condition.

NEXT Dandruff: Causal associations
Back to top
Find this interesting? Share it!

A sudden loss of hair can be incredibly distressing for anyone. Alopecia areata is a non-scarring form of hair loss that is mostly regarded as an acquired autoimmune skin disease. What is it exactly?

Since the early 1980s, HIV/AIDS has been widely publicised as a destructive virus without a cure. We explore the causes, symptoms, diagnostic procedures and various treatment options available...

Stress can affect everyone differently. It is your body's biological response to a certain situation. It is important to know how to deal with stress in order to develop adequate coping mechanisms...

Atopic dermatitis is the most commonly seen type of eczema. This article unpacks the condition, the causes, symptoms and also explores other types.

Allergies are something many people battle with but do not understand. We explore all you need to know about allergies and how to deal with them.