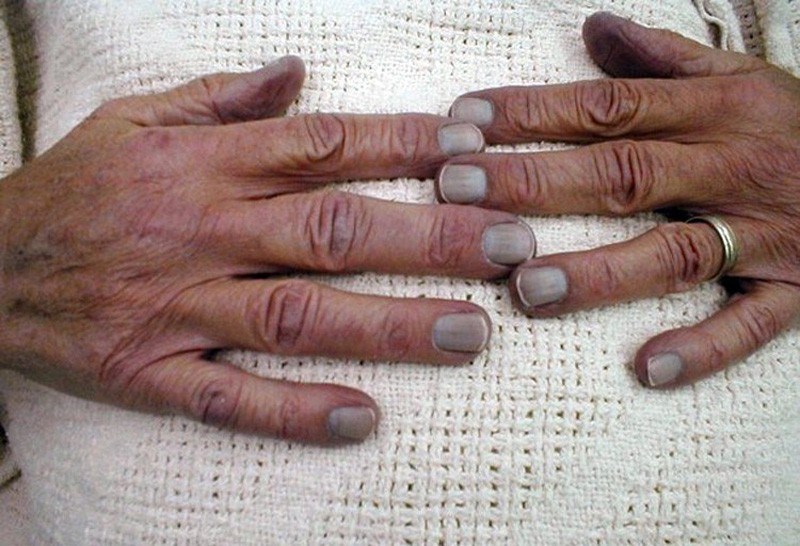 The correct medical term for a bluish colour or hue of the skin, including the skin that is underneath the fingernails, is cyanosis. Blue fingernails are a symptom of this condition.

**My Med Memo - Cyanosis occurs as a result of poor circulation or an inadequate amount of oxygen present in the blood.

This skin discolouration may also suggest that there is a high amount of an unusual form of haemoglobin found in the blood that is circulating in your body. Haemoglobin is a protein molecule found in the red blood cells that contains oxygen which it carries from the lungs to the various tissues in the body, it then returns with the carbon dioxide it collected from these tissues back to the lungs. Simply put, haemoglobin is tasked with the job of transporting oxygen in the blood.

There are a number of factors and underlying health conditions that can cause fingernails to turn blue. These are discussed below.

It is  possible for cold temperatures to make the fingernails appear blue, bear in mind it is the skin underneath the nails, the nail bed, that turns blue and not the actual nail itself. When nails appear blue from cold temperatures it is due to the cold restricting your blood vessels and forcing them to narrow. This creates narrow pathways which make it hard for an adequate amount of blood that is oxygen-rich to reach the skin beneath the nails. Therefore, if you are cold, this can temporarily slow the flow of blood through the skin.

If normal nail colour returns once the hands are warmed or massaged, then the bluish appearance is likely to be due to the cold temperatures. When fingernails turn blue from the cold, this is a normal physiological reaction as the body begins to shift blood flow from the limbs, hand and feet, to the chest and abdomen so that internal body temperatures are maintained and the organs can remain a healthy temperature.

If the fingernails remain blue even when you warm up then an underlying condition may be interfering with the body’s ability to carry oxygenated red blood cells to the various organs and tissues. Let's examine these now:

What conditions can cause blue fingernails?

Blue fingernails may be caused by an underling health condition that results in blue fingernails as a symptom, and in some cases, the blue skin discolouration becomes a chronic condition.

The various common causes of cyanosis are explained below, however, you should never diagnose yourself and should always seek the professional opinion of a doctor if you notice a change in the colour or texture of your nails.

Causes of cyanosis that affect the feet, limbs or hands

If just the toes, limbs or fingers are blue, this is referred to as peripheral cyanosis. These body parts may also feel cold as the cause of the cyanosis is typically from poor circulation as a result of: 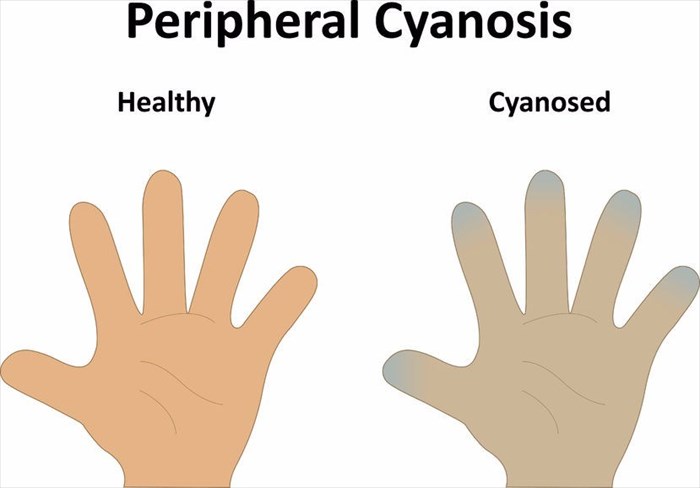 If all or most of the skin and/or lips appear to have a bluish hue to them, this is referred to as central cyanosis. This form of cyanosis is normally a sign of the oxygen levels in the blood being low. The causes of central cyanosis are explained below:

Disorders of the lungs

The lungs and respiratory system allow for oxygen to be taken from the air that is breathed in, the lungs also rid the body of carbon dioxide when it is breathed out. The lungs are tasked with the important job of ensuring that oxygen is transported throughout the body in order for it to function. If their functional ability is impaired in some way, this can result in the blood containing less oxygen resulting in cyanosis.  This may occur due to:

Disorders of the airways

Disorders of the heart

Other causes of cyanosis:

How is cyanosis diagnosed and treated?

In order for cyanosis for to be diagnosed, a doctor will need to measure how much oxygen is present in the blood, this is done through testing with a non-invasive pulse oximeter. This is a medical device that will indirectly monitor the presence of oxygen (oxygen saturation) in the blood. The process of using this device will involve placing a cup-like instrument on a body part, such as an ear lobe or finger. This probe will use light in order to measure the level of oxygen in the blood.

ABGs (arterial blood gases) are also conducted. This test will measure the pH (acidity), carbon dioxide and oxygen present in the blood through a sample taken from an artery. An ABG will determine the ability of the lungs to move oxygen into the blood and remove any carbon dioxide from it.

The treatment for cyanosis will normally depend on the underlying cause identified by your doctor. He or she will also work towards restoring an adequate amount of oxygen to the blood.

When is cyanosis a medical emergency?

Those with blue fingernails should be aware of the following symptoms that may develop along with, or shortly after blue fingernails become evident. These are considered a medical emergency:

Swelling in the vocal cords, voice box, bronchial tubes and windpipe is often as a result of croup. Here, we define the causes and types of croup, as well as how to recognise the signs...

What to do when someone is choking

Choking is a life-threatening medical emergency with mere minutes to appropriately respond to. Knowing what to do correctly can save someone's life. We give you a comprehensive breakdown here...

A serious medical condition, frostbite can lead to severe and irreversible tissue damage. A common freezing injury, we breakdown what happens, what causes it and how best to go about treating it...

An asthma attack can be a terrifying experience for anyone suffering the condition. Here's what to know about this inflammatory disease.