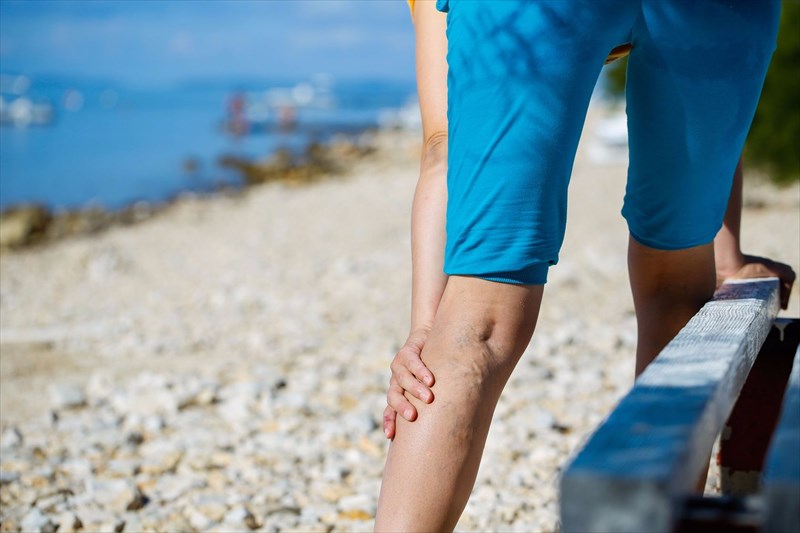 Also known as thrombophlebitis, venous thrombosis and ‘blood clot in the leg’, deep vein thrombosis (DVT) is characterised as a blood clot (also referred to as ‘thrombus’) which forms in a vein, more commonly, deep inside the inner thigh, lower leg or pelvis. Considered a serious condition, blood clots are essentially gelatinous clumps of blood (thick, jelly-like and sticky), which form when blood flow is slow in the system and thus disrupts normal circulation. A clot can form in one or more veins in the body, most commonly in the legs, but can develop anywhere (sometimes even in the arm/s).

The most common signs of DVT are swelling (oedema) and pain in the leg/s, redness or discolouration and warmth in the affected area, although no symptoms may be evident until complications occur. Such symptoms must be taken seriously and be attended to by a medical professional as soon as possible.

Treatment for deep vein thrombosis should be administered as quickly as possible. Without sufficient treatment, blood clots in the body can quickly escalate into serious complications, such as venous thromboembolism (DVT and pulmonary embolism whereby blood flow obstruction caused by the clot causes disruption to the function of the lungs when it becomes lodged in a pulmonary vessel), post-thrombotic syndrome (also known as venous stasis syndrome) or post-phlebitic syndrome (also known as venous stress disorder). Any serious complication associated with DVT can become life-threatening or cause serious illness and disability.

Deep vein thrombosis most typically occurs as a result of remaining in one position for a long period of time as may be necessary to facilitate healing following an accident or surgical procedure, or if sedentary and confined to bed rest due to illness. Travellers are also frequently warned about DVT during long flights. Other common causes include injury to a vein (due to a bone fracture or other trauma), an inherited blood disorder, certain medical conditions (such as heart disease or cancer), the use of treatment therapies containing oestrogen (such as oral contraceptives or hormone replacement therapy), treatments for cancer (such as chemotherapy and radiotherapy), pregnancy, obesity and smoking.

Although considered serious, deep vein thrombosis is a relatively preventable condition, and can also be effectively treated when appropriately sought out. 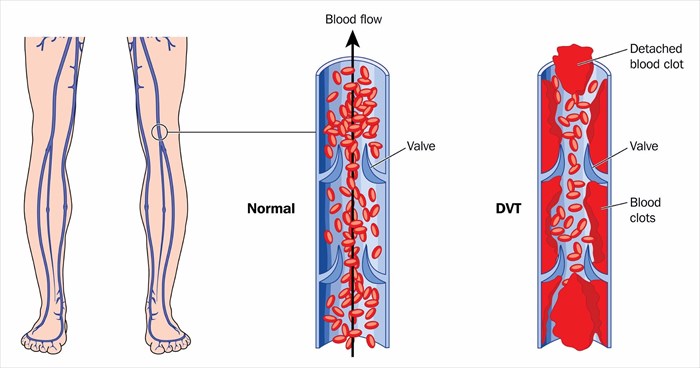 Why and how do clots form?

Blood clotting or coagulation usually occurs in response to injury when platelets and proteins in the blood plasma combine to prevent excessive bleeding. Once the injury is healed, the body will work to dissolve the clots naturally. In some cases, however, clots do not dissolve and in others, they develop without obvious injury occurring. Deep veins and superficial veins are the two main types of veins in the limbs (arms and legs) wherein blood clots can occur. Superficial veins are located just beneath the skin’s surface and can be easily seen. Deeper veins are more deep-seated, located within the muscles and along the bones of the extremities.

Arteries in the body consist of thin muscles within their wall linings (muscular-walled tubes) which offer protection against the constant pressure build up from blood being pumped from the heart. Arteries form part of the body’s circulatory system allowing, mainly oxygenated blood, to flow from the heart and ‘feed’ various tissues all around the body, and then return (to the right atrium of the heart).

Deep and superficial veins do not have the same muscular structure as arteries, but do aid in circulating blood flow (back to the heart). Blood flows from the superficial veins into the deep venous system, and thereafter through small perforator veins. Perforator veins essentially perforate (pierce or permeate) deep fascia (a sheet or band of connective tissues) in the body’s muscles, allowing for draining of blood which connects the deep and superficial veins. Both superficial and perforator veins consist of one-way valves which effectively allow blood to only flow in the direction of the heart (once muscles in the body have squeezed these veins, generating better flow).

Larger veins consist of a thin layer of internal elastic membranes which offer protection (much like a buttress) against blood being pumped through the system and various other internal pressures. Superficial veins are surrounded by fatty tissue and can easily accommodate large volumes of blood. The veins of the deep venous system have thicker walls and are less dilatable than superficial veins.

Blood flow that slows down for any reason, stagnates, and this allows for clotting (thrombus) to occur. Clotting of blood (in the superficial veins) in itself is not a dangerous occurrence. The perforator veins perform a sieve-like function, preventing clots from being transferred into the deep venous system.

It is when a clot (thrombus) dislodges (or a piece of it breaks loose), forming an embolus, that risk increases. The embolus can then travel through the circulatory system, back to the heart, and or / enter the pulmonary arteries (arteries carrying blood from the heart to the lungs) and cause an obstruction in the lung vessels known as a pulmonary embolism. Blood flow that is prevented from flowing as it should, back to the heart and lungs effectively decreases the amount of oxygen normally delivered to the lungs. When this happens, DVT can become dangerous or potentially fatal.

Understanding the basics of the deep venous system structure 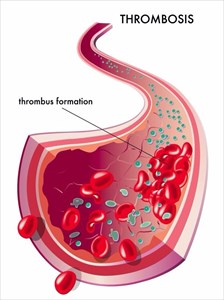 The venous system returns blood from all parts of the body to the heart. The lower limb consists of two separate systems in the deep venous structure:

There are 3 pairs of deep veins in the leg:

In the calf muscle, venous sinusoids (small blood vessels that are types of capillaries) form intramuscular venous plexuses (a complex set of interconnected blood vessels between the muscles) which join peroneal veins in the mid portion of the calf. These help the muscle to facilitate a pumping function within the calf. The tibial veins, just below the knee, join the popliteal vein and assist the calf muscles to transfer blood upwards from the feet (against gravity), back to the heart. This system is sometimes known as the ‘peripheral heart’ (a complex pattern of pumps and valves).

The pumping action or pressure level is neutral to begin with and thereafter fills the calves with blood. The calf muscles then contract and thus close the perforator vein valves. Outflow valves are then forced open, the calf muscles relax and veins and sinusoids refill with blood supply from the superficial and perforating veins. The outflow valves then close, preventing blood flow from reversing.

Compression of the left common iliac vein (by the right common iliac artery) can lead to an outflow obstruction that is often associated with deep vein thrombosis.

NEXT Causes and symptoms of deep vein thrombosis
Back to top
Find this interesting? Share it!

Did you know that almost one third of the world's current population are classified as overweight or obese? Here's all you need to know about the condition, associated health risks and more...

Cancer is an umbrella term for a group of diseases caused by the abnormal growth of cells. Read this overview article to find out all you need to know about the progressive disease.

We all know that a person having a stroke is in a serious situation, but do we really know what to do in the event of an emergency? Learn more here...