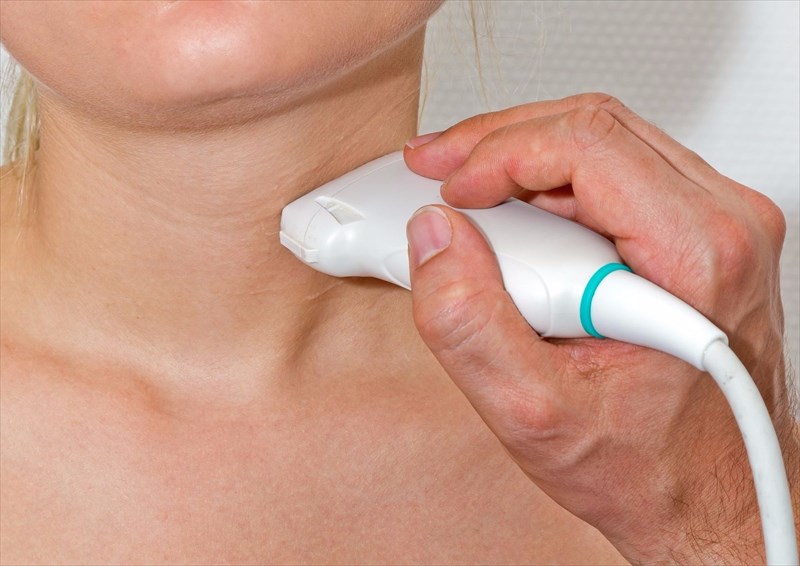 The most common types of thyroid disorders are:

When an excess amount of thyroid hormones are produced, a condition known as hyperthyroidism occurs. Overproduction of hormones can occur for various reasons, and most often result in an increased metabolism. An overactive thyroid is more common among women (1%) than men.

Some of the underlying causes of hyperthyroidism are:

Malfunctions of the pituitary gland or a malignant (cancerous) growth that develops on the thyroid gland are rare, but are possible causes of hyperthyroidism too. Hyperthyroidism can also be drug-induced with some heart medications known to alter thyroid hormone function.

Hyperthyroidism may also occur during pregnancy and is estimated to affect approximately 1 in every 2 000 women. The majority of the time (about 95% of the time), Grave’s disease is the underlying cause. Symptoms associated with either condition can, at first, appear very similar – nausea and vomiting, elevated blood pressure and a persistent rapid heart rate. All symptoms along with significant weight loss, should be evaluated by a medical doctor and the patient tested for an overactive thyroid.

A mild case of hyperthyroidism is not normally considered threatening to an expectant mother and her developing baby. A mild case may not even need to be treated either. A doctor will request frequent follow-ups to monitor the production of thyroid hormones. Moderate to severe cases, however, are a red flag for a medical doctor and can result in both maternal and foetal complications. These can include an abnormally rapid heart rate (tachycardia) and poor weight gain during pregnancy.

Testing (scans) or treatment using radioactive iodine will not be used during a woman's pregnancy due to risk. Treatment during the first trimester may involve medication (usually propylthiouracil) to block the synthesis of thyroid hormone and better regulate levels to either borderline or just above normal levels. Medication will need to be switched during the second and third trimesters so as to avoid serious risks. Medication which may be prescribed during the mid and latter stages of pregnancy is methimazole.

Postpartum subacute thyroiditis (postpartum thyroid disease) is another condition which can occur, commonly within 3 to 6 months after the delivery of a baby, or a miscarriage. Signs of hyperthyroidism are typical indications, followed by symptoms of hypothyroidism – a woman may experience weight loss, anxiety and palpitations, and then weight gain, constipation and fatigue. 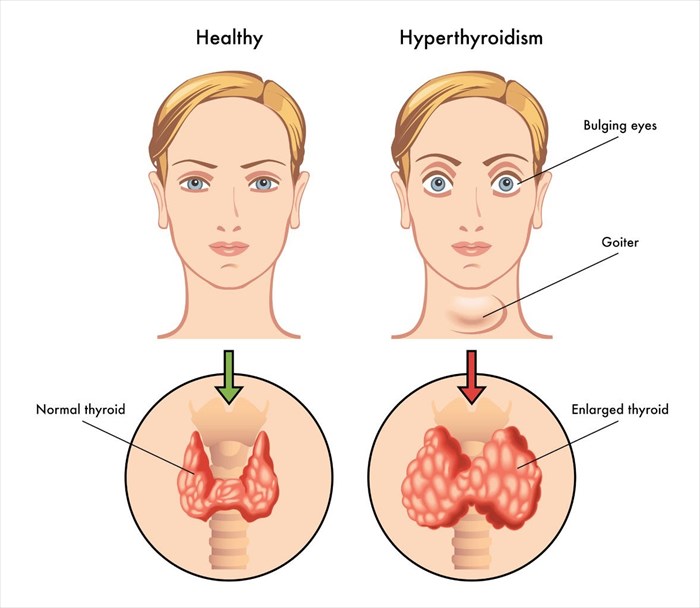 An underproduction of thyroid hormones can result in too little being available for circulation to the body’s tissues. A lack of thyroid hormones results in low energy levels, and at its worst can be potentially life-threatening too (causing myxoedema/myxedema coma which results in the loss of brain function). An underactive thyroid can also lead to problems and deficient function of the pituitary gland and hypothalamus too.

Possible causes relating to an underproduction of necessary hormones include:

An underactive thyroid can occur during a woman’s pregnancy, although this is rare. Generally, the majority of cases are women with an existing thyroid problem. Women with untreated hypothyroidism have difficulty in producing mature eggs on a regular basis and thus often have trouble conceiving. It is therefore not common for hypothyroidism to occur during a pregnancy.

Hypothyroidism should be properly diagnosed and treated during pregnancy, however. Signs are similar to those associated with pregnancy changes and include weight gain, fatigue, poor concentration, and tingling or numb sensations in the hands and feet. The risk of complications with the baby is the main reason why hypothyroidism must be adequately treated. Untreated, a baby is at higher risk of stillbirth and growth retardation, and an expectant mother is more likely to experience complications during pregnancy such as eclampsia (high blood pressure and seizures), anaemia (lack of healthy red blood cells) and placental abruption (detachment of the placenta from the uterus).

If hypothyroidism is diagnosed, a doctor will wish to schedule routine check-ups to monitor a woman’s condition and check T4 and TSH levels, especially during the initial 20 weeks of pregnancy. Medication will also be prescribed during the first trimester. Dosages will be adjusted for the second and third trimesters as well.

Newborns and infants are at particularly high risk when affected by hypothyroidism. Infants with an underactive thyroid are typically quiet, inactive, sleep excessively and have a poor appetite. At such an early age, correct levels of growth and development are vital. An underactive thyroid can result in a condition of severely stunted physical and mental growth and development, known as hypothyroid cretinism (mental retardations and dwarfism), as well as the development of a goitre (gland enlargement).

As a result, most infants are assessed routinely following birth to ensure that thyroid hormone levels are normal. If levels are below normal, treatment will be required immediately. Causes of hypothyroidism in infants are much the same as for older individuals and also include the presence of a pituitary gland disorder, malfunction of the thyroid gland or a lack of a gland entirely. 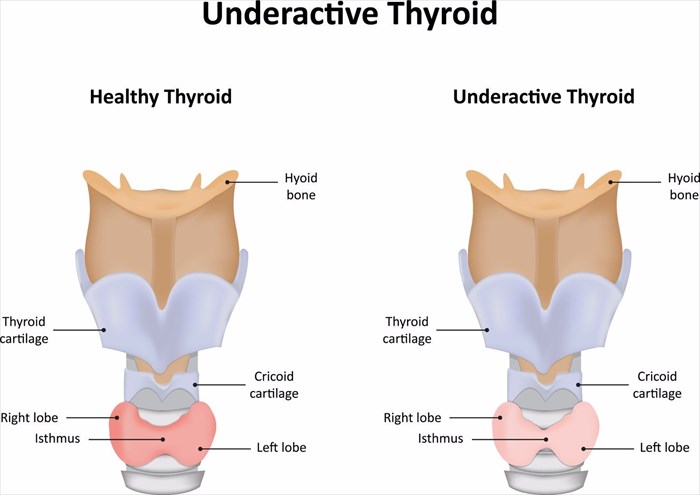 3. Goitre / thyroid nodules (enlargement or swelling of the thyroid gland)

Goitres (goiters) or nodules of the thyroid can develop in both an overactive or underactive capacity, and typically cause an enlargement of the gland and / or nodules. These growths (normally benign) can sometimes also be both seen (large lumps on the neck which are solid or fluid-filled) or felt.

Goitres can also occur in the thyroid gland when function is normal, particularly in individuals who are iodine deficient. Nodules develop as a result of benign tumours or cysts, and can sometimes lead to cancer of the thyroid. Nodules either occur individually or as multiples of varying sizes.

A thyroid goitre or nodule (abnormal mass or lump) that is quite large will cause a considerable amount of pressure (compression of structures and tissues nearby) that can be felt in the neck, especially when swallowing hard or consuming firm foodstuffs, such as meat or the crusts of bread. It can happen, although it is very rare, that a growth can become large enough to completely interfere with swallowing function or impact breathing. A small, but dry cough may also accompany the growth.

External radiation exposure or an iodine deficiency are often the two main causes of nodular or multinodular goitres (multiple goitres or nodules form in the thyroid gland). Other risk factors are age (especially women over 40), medication use, pregnancy or a family history of thyroid problems.

Goitres or nodules that are detected during pregnancy should not go ignored either. It is common for these types of growths to slightly enlarge during a woman’s pregnancy. A prenatal vitamin that contains iodine will likely be recommended and periodic check-ups will need to be scheduled to monitor a woman’s condition (often with an ultrasound scan). If necessary, a needle aspiration biopsy of the growth will be requested. 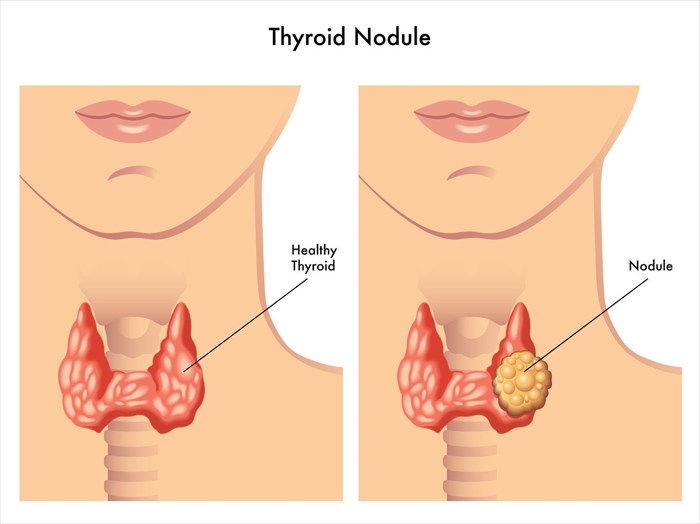 Malignant (cancerous) thyroid goitres or nodules are rare (as little as 5% of cases) and may take several years to develop. Cancerous lumps are found to be more prevalent in older adult women than men and younger generations. Radiation treatment involving the head and neck has been linked to a higher risk of thyroid cancer.

The most common type of thyroid cancer is papillary thyroid carcinoma, occurring approximately 85% of the time. Therapeutic radiation exposure at a young age is linked as an underlying cause of this type of cancer. The majority of cases, however, are not linked to any known cause. If diagnosed and treated early, the majority of instances have a good prognosis (i.e. high survival rate). 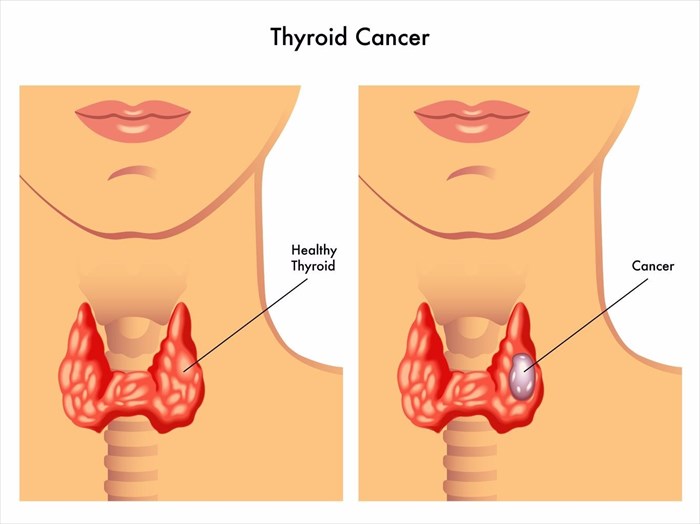 PREVIOUS Thyroid Disorders
NEXT Signs and symptoms of thyroid dysfunction
Back to top
Find this interesting? Share it!