What types of complications are associated with the Zika virus? 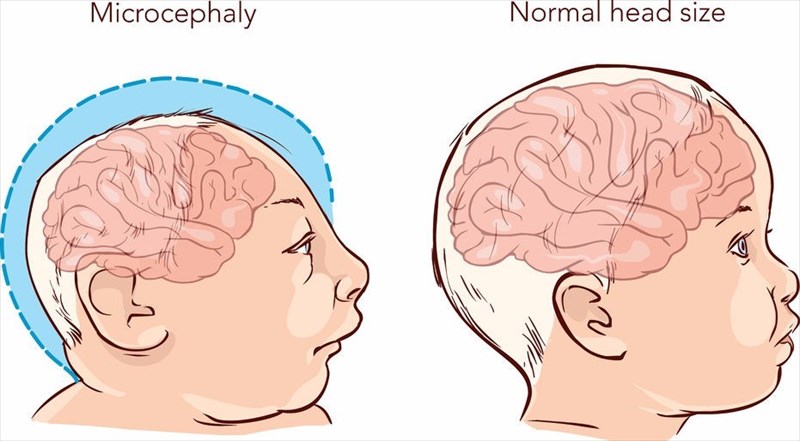 What types of complications are associated with the Zika virus?

Zika virus doesn’t appear to cause too many physical complications in most cases. Where the virus has caused great concern is in the following instances:

Exposure to the Zika virus during pregnancy has presented the most cause for concern due to the high risk of microcephaly – a birth defect in which a baby’s head and brain (if severe) are insufficiently developed (smaller than normal). If a baby’s brain does not develop at an appropriate rate during a woman’s pregnancy, neither does the size of the head. A baby’s head grows because of the development of the brain. Sometimes, the brain simply stops growing following birth or is compromised during pregnancy due to infections such as Zika, or even rubella (German Measles) contracted during any trimester.

Microcephaly is considered an isolated condition, which means that it typically does not occur in combination with any other major birth defects.

A baby born with this defect can experience an array of problems throughout their lifetime. These will depend on the severity of the under-developed brain and head and can include:

Severe instances of this birth defect typically result in more of the aforementioned symptoms occurring than milder cases, or more difficulties with a handful of them. The condition is potentially life-threatening for a baby in its more severe form, but all babies born with this defect require regular medical check-ups, as well as monitoring of overall growth and development throughout their lives.

Microcephaly may either be diagnosed during a woman’s pregnancy or once the baby is born. During pregnancy, an ultrasound scan can be done during the latter half of the second trimester or early on during the third trimester.

Once a baby is born, a doctor will assess the circumference of the head during a physical exam (measuring the distance around a baby’s head). The measurement is then compared to the population standard according to age and sex. A circumference measurement that is smaller (less than 2 standard deviations) than the average of other babies of the same age and sex and is determined as less than the third percentile (the value below which a percentage of average observations fall) will likely be diagnosed as microcephaly.

Head circumference measurements are best taken during the first day of a baby’s life. A more accurate measurement can then be compared with the standard chart which is based on those taken before the end of an initial 24-hour period. The sooner a measurement is taken, the better.

A doctor may recommend testing to confirm a diagnosis. This can involve an MRI (magnetic resonance imaging) which is capable of producing detailed visuals of a baby’s brain / head structure. These visuals will provide a doctor with critical information in order to make an accurate diagnosis and also determine if a baby was indeed affected by an infection in the mother’s body during pregnancy. Scans will also be helpful for determining any other abnormalities which will require medical care.

One of the main reasons pregnancy precautions have been urged by the CDC is because of the irreversible damage of this birth defect. There is no cure for microcephaly, nor is there a standard treatment plan. Treatment options vary on a case-by-case basis and depend on the needs of the child according to the severity level of the condition.

Mild cases may only require routine check-ups where growth and development will also be monitored. Severe cases will need the aid of developmental services from the early stages of life, with multidiscipline areas of expertise. These will include speech, physical and occupational therapy sessions to teach, improve and provide optimum quality of life when it comes to both the intellectual and physical challenges a child with this condition will face. If a baby or child experiences seizures, medication may be required for treatment to control the potentially life-threatening experiences of this symptom.

The link of this condition to Zika virus is still being researched but is a significant one following the birth of more than 2 100 babies in Brazil (in early 2015) showing signs of the condition and other birth defects, all associated with infected mothers. The CDC feels that the evidence in this regard is substantial enough to show that the virus is directly linked to the outcome (birth defects).

Researchers have thus far, been able to determine that women who contracted the virus during the earlier stages of their pregnancy, while the organs of the baby are still forming, appeared to result in the most severe cases.

A pattern of congenital defects due to a Zika virus infection at any stage of a woman’s pregnancy can also be diagnosed as congenital Zika syndrome. There are 5 main features of this series of defects, which are rarely seen with any other pregnancy associated infections:

A baby may not be born with microcephaly following a Zika virus infection, but instead experience slow head growth later on (post-birth). This is often referred to as postnatal microcephaly. To date, it is not entirely understood what the full range of health-related complications are as a result of an infection with the Zika virus. Chances of defects are certainly high, but not all babies may be born with visible concerns. Studies of the virus and the transmission effects continue on an ongoing basis.

It is thought that a woman who is not pregnant and infected with the virus should not be high-risk for birth defects in a future pregnancy. The virus clears from the body fairly quickly and is not likely to have any future impact on potential pregnancies down the line. The theory regarding similar viral infections is that once the Zika virus has cleared, a person should be protected for any others in future.

What is currently known regarding birth defects (as an outcome of Zika infected pregnancies)?

Research with regards to birth defects in particular is ongoing. Teams are currently assessing the links between infected women and the resulting health complications in young infants. Assessments are looking at direct causal links not influenced by any other potential factors. Research is being continuously documented with comprehensive monitoring records and laboratory evidence in Zika pregnancy and infant registries. This is used to update recommendations regarding clinical care, as well as plan for more effective support for pregnant women and improve prevention methods when it comes to infections during pregnancy.

How will a baby affected by birth defects be cared for?

A new-born with birth defects following a Zika infection in the mother will likely experience a series of tests post-birth before being discharged from hospital. A baby will not only have head circumference measurements taken but also have their weight, length, skin, neck, heart, lungs, abdomen, muscles, bones, genital, as well as overall responsiveness or alertness checked and examined. Testing will also involve a neurological exam to assess brain function, especially responses to the environment, hearing, vision, reflexes (sucking and swallowing) and overall movement. A baby’s ability to grab things will also be checked.

Tests will be recommended multiple times, especially during a baby’s first year of life. Any abnormalities will be addressed with a treatment plan and potentially specialist care. Specialists can include a neurologist (brain, spinal cord and nerves), ophthalmologist (eyes), endocrinologist (hormones and glands), orthopaedist (musculoskeletal – bones and muscles), pulmonologist (lungs), ENT (ear, nose and throat), physical therapist (physical rehabilitation), as well as a nutritionist, speech or occupational therapist, lactation specialist and gastroenterologist (gastrointestinal tract and liver).

A new parent will need to take an active role in coordinating medical care for a baby with birth defects, ensuring that all involved effectively address and take the best possible care of a child with developmental and physical problems. Early intervention is best, so parents are advised not to put off medical care for their new-born. Medical health insurance providers can assist with costs involved in the care for a child with abnormalities and birth defects.

A rare condition, GBS occurs when a person’s own immune system begins attacking nerve cells in the body (instead of invading organisms only), causing damage to muscles and even paralysis. Damage caused by this unnatural action prevents the body’s nerves from being able to transmit signals to the brain.

It is not common, but isolated reports have been noted with strong ties between the development of the condition following a Zika virus infection. Studies are still being conducted to better understand the nature of this association.

What is known about the condition (unrelated to the Zika virus) is that it typically occurs within days or weeks following an infection of the respiratory or digestive tract.

Initially tingling sensations and weakness begin in the legs, toes, ankles and feet (or wrists), before spreading to the trunk of the body (upper body) and arms. This then results in problems with walking, where an individual may have difficulties climbing stairs or become unsteady while moving about.

Muscle weakness can sometimes affect those that control breathing too, as well as cause difficulties with eye or facial movements in general (such as speaking, swallowing and chewing).

Other symptoms and complications of the condition include:

Guillain-Barré Syndrome can be tricky to diagnose during initial stages as many symptoms mirror other neurological conditions. The most significant symptoms experienced typically arise within a period of 2 to 4 weeks, after which they plateau.

Diagnosis is typically achieved following a thorough medical evaluation which will involve a physical examination, spinal tap (lumbar puncture), electromyography or a nerve conduction study (whereby electrodes are taped to the skin and a small shock is passed through the nerves to assess the signal speed).

To date, there is no cure for GBS, but two treatment options are available depending on the severity of the condition. These are a plasma exchange (plasmapheresis treatment which removed part of a person’s plasma and is separated from blood cells, which are then placed back into the body) and immunoglobulin therapy (using healthy antibodies from blood donors and administered intravenously in an effort to block damaging antibodies). Treatment will also involve medication for pain relief and to prevent blood clots, as well as physical therapy.

The outlook is not as severe as that for birth defects as treatment can result in vast physical improvements in at least 6 months or up to a year following diagnosis. Some cases, however, never make a full recovery.

The Zika virus link first arose in Brazil and French Polynesia when outbreaks of infections and the condition occurred around the same time. Research teams are looking into gaining more insight regarding this link.

Are there other possible health condition links?

Zika virus infections have possible links with the following conditions and are currently being researched further:

As of yet, there have been no reported risks concerning breastfeeding mothers transmitting to virus to young infants.

PREVIOUS Zika virus treatment
NEXT Zika virus prevention
Back to top
Find this interesting? Share it!