How probiotics work in the body and their health benefits 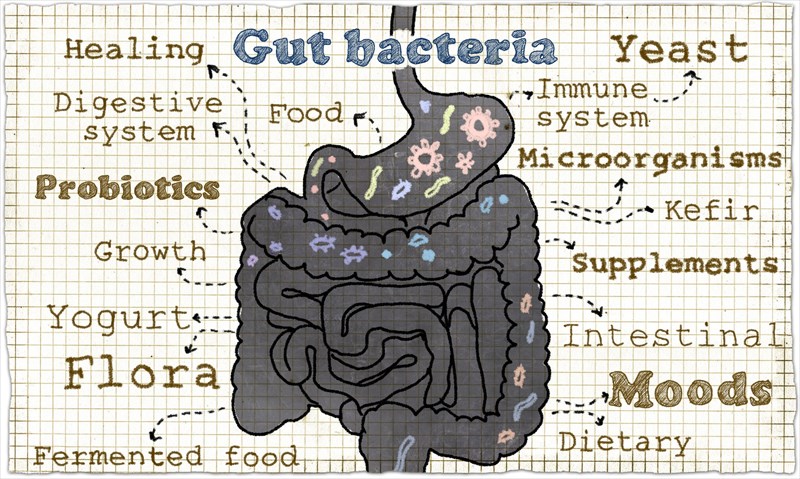 How probiotics work in the body and their health benefits

How do probiotics function in the body?

Experts often compare the intestinal tract of the human digestive system to that of an ecosystem15. This is because it contains roughly 500 different types of microorganisms, which are mostly anaerobic bacteria (anaerobic refers to an organism that does not require any oxygen to live and grow) that live and function together.

These microorganisms are referred as the gut’s microbiota (i.e. the microorganisms of a particular habitat or site, which in this case, is the human digestive system), populate the human gut from birth. Colonisation occurs naturally through exposure to the environment and the ingestion of breast milk as well as various foods and is vital for gut health. Every individual has unique microbiota and the composition thereof is determined by a number of factors such as diet, age, genes, antibiotic usage and socioeconomics.

The health of the gut is based on a delicate balance, if this balance of microorganisms and their various species is upset in some way, then certain pathogens (i.e. microorganisms that causes disease or infection) may multiply and overrun the beneficial bacteria and species, this results in a disruption of the gastrointestinal tract and inflammation, as well as associated health conditions.

Several strains or types of probiotics are deemed as beneficial or friendly and are vital to our health and survival as they play an important role in:

What are the health benefits of probiotics?

Our understanding of the human gut and its ecosystem of microorganisms (i.e. the human microbiome) is constantly advancing and evolving. The potential health benefits of probiotics and their possible impact on the health of our guts has garnered a great deal of interest among health experts and researchers alike.

Although there is still a large amount of speculation surrounding the use of probiotics, what has been determined through research and clinical trials (although evidence is preliminary) is that probiotics may be responsible for a number of health benefits.

Probiotics are thought to have several health effects on the body and different strains of probiotics have different effects or roles within the body. These roles include:

Now that the basic roles of probiotics are understood by the medical community, the proven scientific findings surrounding probiotics and their effects on our health is advancing on two different fronts, these include17:

Although there is some clinical evidence that supports and proves the use of specific strains of probiotics for certain health purposes, there is still a large lack of research and definitive results and the current evidence is considered to be preliminary.

The scientific evidence that is readily available includes the following findings18:

IBS (irritable bowel syndrome) is an intestinal condition that results in stomach pain, bloating, flatulence, constipation and diarrhoea. The exact cause of this condition is not yet fully understood, as a result, treatment options are limited and often misguided. The condition is believed to be one that is multifactorial, as there are several factors involved which include:

Recently conducted studies20 suggest that probiotics may have beneficial properties when treating the symptoms of IBS. However, the specific way in which probiotics may help in reducing these symptoms is still unknown. It is thought that the effects probiotics have on the alterations in the bacteria within the gut may have a role to play.

Probiotics are likely to work in conjunction with other forms of treatments for IBS as these live microorganisms play a therapeutic role in a treatment plan. The research conducted to date is limited, studies have been small in size and lacking in their duration (i.e. short-term), in addition, there have been significant flaws in their designs.

However, what a number of studies have found is that B. infantis (Bifidobacterium infantis)15 is the popular choice of probiotic when treating IBS. Should more-controlled and larger studies reveal conclusive findings regarding the use of probiotics for IBS, then additional strains may be identified and the treatment of the specific symptoms of IBS may also be linked to specific probiotics.

There are also additional issues needing attention in order for probiotics to be considered a viable form of treatment for IBS. Some questions that will need to be answered through large clinical trials include:

As it stands, probiotics are not viewed as pharmaceutical drugs, as a result they are not regulated by the FDA (the US Food and Drug Administration). If probiotics were regulated, this would promote additional and consistent clinical trials, allowing for more concrete evidence surrounding their benefits to be made available.

Currently, experts believe that probiotics may play the role of a ‘delivery van’ in delivering therapeutic benefits that target areas affected by inflammation within the gastrointestinal tract. However, additional research is required in order to establish the exact mechanism of how probiotics work in combatting inflammation within the gut, which in turn relieves the symptoms of IBS.

There is some evidence that suggests that probiotics may be beneficial for the maintenance of vaginal health21, this is also known as the maintenance of urogenital health. The vagina is similar to the intestinal tract in that it has a delicate balance of microorganisms. The dominant bacteria include strains of Lactobacilli, these bacteria will typically create an acidic environment, making is difficult for harmful microorganisms to survive. However, this finely tuned balance of microorganisms may be disrupted by several different factors which include the use of spermicides, birth control pills and antibiotics.

Probiotics may aid in restoring this balance and even be beneficial in the treatment of certain female urogenital issues such as yeast infection, UTI (urinary tract infection) and bacterial vaginosis.

Vaginal and oral administration of the bacteria Lactobacilli may aid in treating bacterial vaginosis, however, the evidence to support this form of treatment over more conventional approaches is preliminary. Vaginosis is a condition that requires treatment as it may put a woman at risk of pregnancy-related complications, as well as pelvic inflammatory disease (PID). At this stage, additional research is required on probiotics and their effect on urinary tract infections.

**My Med Memo – Bacterial vaginosis is a condition that describes the overgrowth of bacteria that is naturally present in the vagina. It is not viewed as a true bacterial infection as it is rather an imbalance of the already present bacteria.

There are two species of probiotics that have been shown to prevent and treat fungal and bacterial vaginal infections, these include Lactobacillus reuteri (RC-14) and Lactobacillus rhamnosus (GR-1).

Probiotics are generally safe to use as they are already present in the gut/digestive system. However, there are some theories linked to the risk of those with impaired immune systems using probiotics. It is generally advised that you speak to your doctor before using probiotics for vaginal health.

16. Vitamins and Minerals. Should Probiotics be considered as Vitamin Supplements? Available:   https://www.omicsonline.org/open-access/should-probiotics-be-considered-as-vitamin-supplements-vms.1000e124.php?aid=22477 [Accessed 20.03.2018]

PREVIOUS What are the best probiotics?
NEXT Which probiotic strains should I look for in supplements?
Back to top
Find this interesting? Share it!